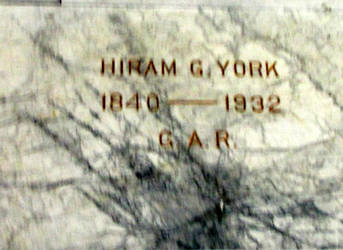 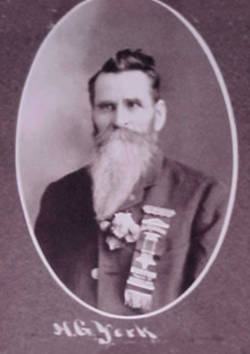 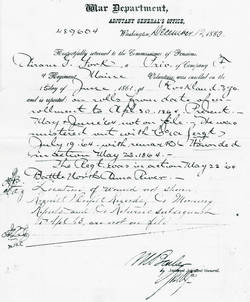 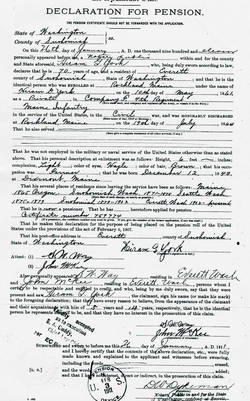 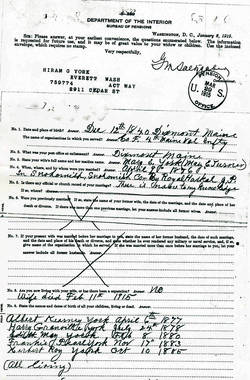 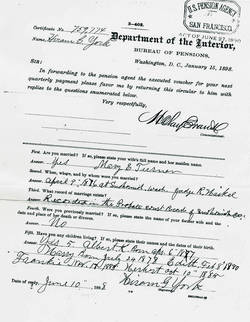 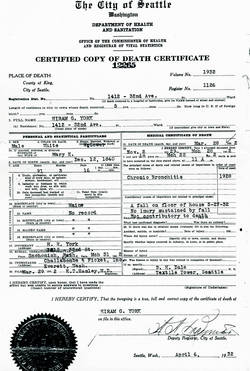 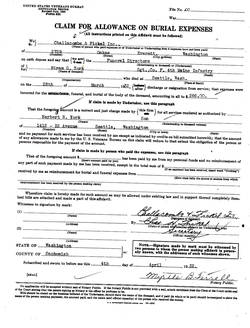 On the date of its muster into U.S. service only three of the 4th ME’s companies (A, F, K) had prior military experience. Still, two days later the regiment, armed with Springfield smoothbore muskets, was marching off to war. During its three-year term of service, the 4th, starting with Bull Run, was to “participate in all important battles of the Army of The Potomac.”

At Williamsburg the unit “saved the day”, while at Fair Oaks, White Oak Swamp, Gaines’ Mill, Glendale, Chancellorsville, Gettysburg, The Wilderness, North Anna, and “many other bloody fields it rendered magnificent service.” By the time of its dissolution the names of 1,525 men had been listed on the regimental rolls.

Ed. Note: The original birth to death biographical profile on Hiram York was written during the early years of the Civil War Veterans Buried In Washington State project. As such, it was limited in terms of size and available research sources. The biography below is an update created in September, 2018. While more detailed than the original, it still lacks the depth and detail of more recent profiles entered onto this site.

Hiram G. (henceforth simply Hiram) was to remain in the town of his birth until entering the military in 1861. As the six foot farmer’s Co. F was one of three units of the 4th Maine to have had some military service it is very possible York was a member of the state militia prior to entering U.S. service. This could explain why Hiram lists the beginning of his military experience as 5/10/61 while federal records recognize 6/15/61.

Available documents are clear in noting Private York was to rise to the rank of corporal and then, sergeant. They are less clear on his wartime sufferings. One source indicates York was hospitalized for illness in 1862 and was wounded the following year during the carnage of Chancellorsville, VA. However, Hiram’s personal recollection has him “hit on the head with something” on 5/23/64 during a federal charge on a bridge during Grant’s southward advance at the North Anna River.

The head “wound” reportedly resulted in his hospitalization in Wash. D.C. and New York in mid 1864 near the end of his military service, but “healed in about three months.” It reportedly caused him no further trouble until later in life when, as a result of the old injury, he applied for a government disability pension because of head and spinal problems.

Leaving the military in mid-1864 Hiram returned to Maine, but by 1870 had moved westward to Canyon City, Grant Co., Oregon.  There he listed his occupation as “miner”.

Although they married in Snohomish County and possibly lived in Snohomish County for a time, by 1879 Hiram and family were living and farming south of there in King County. By the next year, however, the Yorks had returned northward to Snohomish County where they established a farm some two miles down the Snohomish River from the town of Snohomish itself. For a time, in late 1888 or early ’89, Hiram was joined there by his older brother, Sumner, who was also a Civil War Veteran (d. 8/30/23 buried Marshland Cemetery Snohomish Co., WA.).

Mary York died 2/11/15. No details are available pertaining to her passing other than she died in Everett Snohomish County, WA. She was/is interred in the mausoleum located on the grounds of the Grand Army Of The Republic (G.A.R.) Cemetery located in Snohomish, Snohomish County, WA.

Exactly where Hiram resided immediately   following the death of Mary is not known. However, by 1920 he was living in Perris Riverside County, CA on son Harry’s farm. Ten years later, Hiram was back in Washington State residing with his son Herbert and Family in Seattle.

Hiram York died 3/28/32 at the age of 91 years and three months. Although he had been and was afflicted by a number of ailments including rheumatism and the above noted nervous system difficulties, the official cause of death was noted as “chronic bronchitis.” Interment was/is in the Snohomish G.A.R. mausoleum beside Mary.

Footnote: At the time of his death the former Union Soldier was still residing in the Seattle home of his youngest son. He was receiving a huge $100 month government pension, had $794.75 in the bank and owned eight unimproved lots in Everett, WA and one in Sarasota, FL. However, in petitioning the government for burial expenses, the family considered the lots to have “very little actual value under the present (depressed economy) conditions. The outcome of this financial matter is not known.