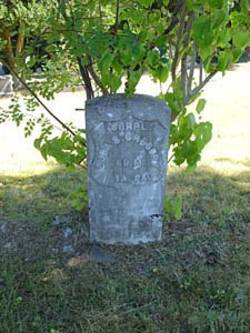 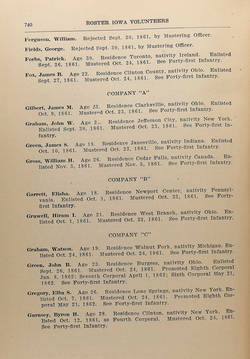 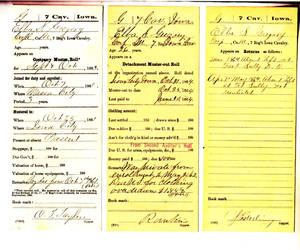 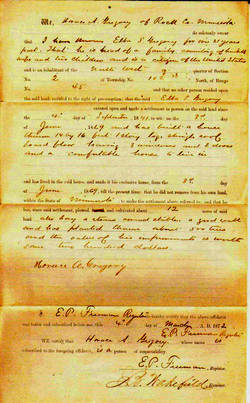 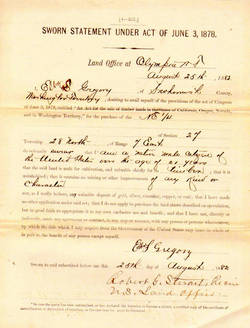 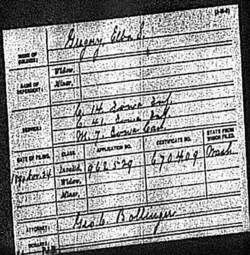 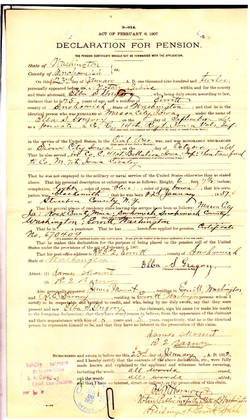 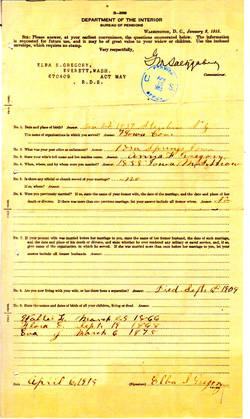 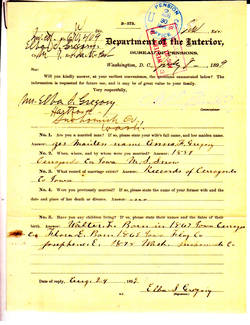 Although Elba Gregory was a mustered member of the 14th for a brief period of time, he was on the rolls on paper only. As he did not do field service with the regiment its history is not being presented herein.

To say the least, the circumstances surrounding this three year western frontier unit's organization and history are somewhat peculiar. Formation of the 14th Iowa Infantry was begun in the fall of 1861 at Camp McClellan near Davenport, IA. During this formation period three companies of the 14th - "A", "B" and "C" - were sent to the west on special service and were not, at any time, identified with the 14th even though they were technically under the command of an officer of that regiment. They were initially stationed at Ft. Randall Dakota Territory where they made frequent, rapid marches to protect settlers and scouting expeditions from hostile bands of Native Americans. Later, completely detached from the 14th, for a time they became the 1st Battalion of the 41st Iowa Infantry. However, when the formation of the 41st was not complete in April, 1863 by order of the governor of Iowa, approved by the war department, the 41st Battalion Iowa Infantry became part of the 7th Iowa Cavalry. There companies "A", "B" and "C" became Companies "K", "L" and "M". From that time until final muster the history of the 41st is embraced in that of the 7th Iowa Cavalry.

The formation of this three year western frontier regiment proceeded slowly. It was finally organized at Camp Hendershott Davenport, IA during the summer of 1863 by a consolidation of companies which had previously been assigned to other organizations

Two companies were mustered into Federal service on 4/27, two more the following day, two more on 6/3, one on 6/16 and one on 7/13. Meanwhile three companies of the 41st Infantry and a company of the Sioux City independent cavalry were transferred to this regiment by war department orders. Nearly a month before the completion of the organization of the 7th it marched for Omaha, NB Terr. There, six companies were stationed at different points throughout the territory.

In September, the headquarters of the regiment along with two companies that had been thus far left in Davenport also moved to Omaha. Headquarters of the 7th remained there until about the middle of July, 1864

During the entire period of the 7th’s service the different companies were scattered over a wide expanse of territory, each actively engaged in the heavy duties required of troops at frontier posts in a country constantly threatened and frequently invaded by a savage enemy.

The regiment garrisoned posts, escorted wagon trains, protected emigrants, guarded lines of travel and telegraph and had frequent combats with the Indians who had been induced by some means to unbury the tomahawk and wage savage warfare against whites.

During the U.S. Census of 1840 the Gregorys were residing in Bath Steuben Co., NY. A decade later, in 1850 they had quitted New York in favor of Blackberry Kane Co., IL. Exactly when and why the westward move was made is not known.

It appears that by 1856 Elba and brothers Francis, Horace A., Salathial and George B. had split off from the family farm and established a residence of their own located in Falls Cerro Gordo Co., Iowa. What exactly this indicated and how to interpret it is not known.....

In 1860 Elba and Anna were residing in Rock Grove Floyd Co., IA with an older couple with the last name Snow.  Elba's occupation was "blacksmith."

On 10/7/61 Elba enlisted in the U.S. Army. His unit and regiment - if only for a brief period of time - was Company "C" of the 14th Iowa Infantry Regiment. He then went on to serve in the 41st Iowa Infantry Battalion [1] and the 7th Iowa Cavalry Regiment. [2]

At the time of his enlistment we obtain our first glimpse of Elba the physical man. He was: 5'7" in height - that was the average height of a Civil War combatant - had a light complexion, blue eyes and brown hair. Once again, his occupation was listed as "blacksmith."

Elba's military experience in all three of the organizations with which he was affiliated was positive. He enlisted into the 14th as a private, but as of 5/26/42 as a member of the 41st he was appointed to fill the position of 8th corporal. From there, in both the 41st and the 7th he continued to climb the corporal hierarchy. He held the rank of 5th corporal at the time of his discharge.

As for additional notations on his military service record, he was often noted as serving detached duty at one of the Indian agencies Also he had bout with dysentery in the latter part of September, 1863. Beyond these notations, the most important item on his muster roll was from March, 1864 when he was not eligible for a furlough and was left behind by his unit at Ft. Sully Dakota Territory because he had decided not to re-enlist and was to be mustered out of the service!!

At final muster at Sioux City, IA on 10/31/64 Corporal Gregory owed the U.S. Government forty four cents for a lost canteen and forty six cents for a cloak strap. The government owed him $8.

According to one document, after leaving the military service Horace and Anna settled in Mason City, Cerro Gardo Co., IA There, their first 1st child was born. They, then, moved to Flag Co., where their second was born.

While available records are rather murky on the matter, sometime at the end of 1868 or very early '69 the Gregorys left Iowa to homestead in Minnesota When this move occurred and where their initial settlement was located is not documented, but by 6/30/69, Elba, Anna and their two children had moved onto a (second,) nearly 156 acre, pre-emptive tract of homestead land located in Luvern Rock County, Minnesota. There they constructed and took up residence in a “comfortable 14' x 16' single story log house with a shingle roof, board floor, three windows and two doors. Additionally, they construct a straw and hay covered stable, cultivated 12 acres and planted 500 trees. To accomplish all this they reportedly did not have to leave their "own" Minnesota land. On 5/26/73 the Gregorys received "patent" or "deed" to the pre-emptory site.

In 1874 the Gregorys quitted Minnesota in favor of Washington Territory. While we do not know exactly when the move was made we do know if was before 5/5/74 as that when the Gregory's third child, daughter, Eva Josephine was born in Washington.

As for why the move was made to the Puget Sound Region that is not known, either. However, it may have been urged by one of Elba's brothers - Jasper – who, by 1880, was already living in the area. Brother Horace would follow, later.

During the 1880 U.S. Census Elba, his wife and three of their children were noted simply as residing in Snohomish County. Elba's occupation at the beginning of the decade of the '80s was "farmer."

On 8/25/82 in Snohomish County, using his Civil War veteran status, Elba filed paperwork to purchase 160 acres of non-agricultural timber land. The following year, on 3/5/83, his brother Jasper who was also apparently residing in the area, testified as a witness that the request was for timber only as the land was not suitable for cultivation and there were no mineral deposits therein. It appears that some problem may have arisen in the application process, so the years dragged by. It appears, however, that in 1889 patent (deed) to the property was granted.

On 6/29/91 Elba began the paperwork to obtain a U.S. Government disability pension  based on ailments or physical conditions which he traced back to his days of Civil War soldiering. In his case grounds for the pension request were rheumatism, partial deafness and a back injury stemming from his accidently being struck by a piece of timber in 1863. The deafness was related to having been subjected to heavy “cannon loading” in 1862. Later, impaired vision - a post war occurrence - was added for good measure.

As with the timber purchase, the paperwork process to obtain a pension dragged on. Further, there was at least one rejection of the request before a stipend was granted. Exactly when that granting date was is not known. As of 12/3/02 Elba was receiving $8 per month. At the time of his death the monthly payment had risen to $30 per month.

On 9/6/09 in Everett, WA Anna died. Details of her passing are not available. Burial was/is in the Machias Cemetery in Machias Snohomish Co., WA.

It appears that after the death of his wife Elba moved into the home of son Walter. In 1910 that residence was noted as being located in Everett's Ward 2 (RFD #2) of Snohomish County.

Elba S. Gregory died on 1/8/18 in Everett Snohomish Co., WA. Interestingly, at the time of passing his pension paperwork showed him with an Okanogan, Okanogan Co., WA address.  Burial was/is beside Anna in the Machias Cemetery.

[1] While a member of the 41st Private Gregory’s first name would appear on company muster rolls as either Elber or Elba.