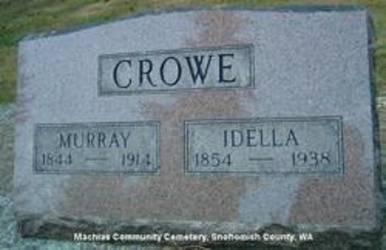 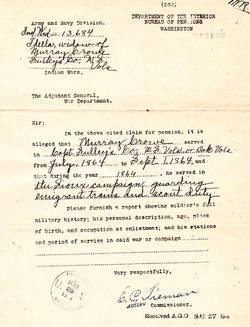 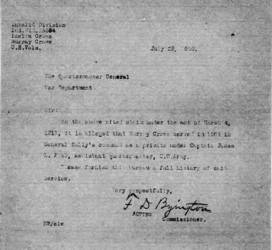 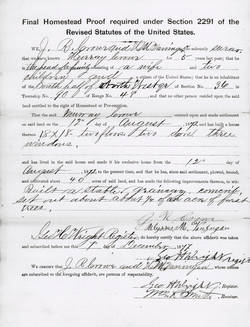 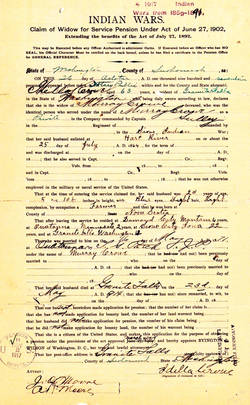 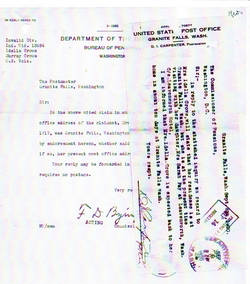 Patrick Murray Crowe was born in Nova Scotia, Canada. The year was 1844. To date no birth date or month has been located. It appears that throughout his life Mr. Crowe was identified, not by his first, but by his middle name.

Murray's parents were William (no b. d.) and Sarah (nee English b. 1854 IL) Crowe. Other identified Crowe children were Joel W. (b. 1841 Nova Scotia), John R. (b. ca. 1848) and William A. (b. ca. 1850) Crowe. According to available documentation, the elder Crowe moved his wife and family from Canada to the United States sometime in 1849. In America the Crowes settled in the State of Minnesota. William was likely a farmer.

In census tallies for 1865 and 1870 the family's community of residence was noted as Claremont in Dodge County. Interestingly, in both instances there is no evidence of William being in the home. In 1865 Sarah is listed as head of the household. In 1870 Sarah is still with the family, but son J.W. - Joel, a farmer - is listed as the family patriarch. What had been the fate of William is not known.  As for Murray, he is not noted in the 1865 family listing, but is in the home in 1870.

During that 1870 year Murray married to Idella Reeves (b. 1854 IL). The wedding took place in Minnesota, but a specific community is not identified. On some date thereafter she and Murray set up house in Iowa. At least by 1880 the community specified was West Fork in Woodbury County. Murray's occupation was listed as "farmer".

Over the years Sarah and Murray would produce nine children. Amazingly, all appear to have survived into adulthood.

Looking at the children’s' places of birth, it is obvious that a majority were born in Iowa. However, by the latter years of the 1800s Murray was moving his family westward toward what would be his final communities of residence, those being the rural western Washington community of Pilchuck located in the county of Snohomish and  - finally - Granite Falls also in Snohomish County. What drew the family there is not documented. Perhaps it was new farmland or the timber industry. Then again, perhaps not. The 1900 census would list Murray's occupation as "blacksmith".

Approximately three and a half years after her husband's passing Idella began the paperwork process to try and receive a U.S. Government pension based on Murray's allegedly having served with the U.S. Army for a period from the 25th or 26th of July up to circa September 1st  of 1864 during America's Civil War. His alleged service was not against Johnny Reb in the south or the east, but in an uprising involving the Native American Sioux tribe in Dakota Territory. The alleged service reportedly involved guarding emigrant wagon trains of families moving west and as well as scouting duties perhaps along the Heart River. As a side note, at the time of his military service Murray's vital stats were allegedly as follows: Age = 20; Height = 5' 10"; Eyes =blue; Complexion/Hair = light; Occupation = farmer.

Murray's alleged unit of service was the nebulous Capt. Sulley's company of (Misc.) U.S. Volunteers/Dakota Volunteers. In fact, there was a Captain - later General - Sulley engaged in the Sioux campaign of the time, but government records showed no connection between Murray Crowe to those actions. The name of a Captain James L. Fiske was also mentioned in connection with Murray's alleged service, but according to Washington, that officer posted no records for 1864 and Crowe's name did not appear in any postings for 1865. In all, if Murray Crowe did serve the U.S. Army perhaps it was as an undocumented, likely unpaid, civilian scout. Despite a lack of documentation on Murray having been mustered into Federal service, Idella's pension paper chase continued for nearly three years before reaching a "dead end". *

* Ed. Note: Where widow Crowe obtained information regarding she possibly being an eligible receipt of a government pension stipend based on her late husband's alleged Civil War soldiering is not known. However, what is known is that if, in fact, even if Murray had served between the dates provided herein, he and therefore she would not have been pension eligible as eligibility required a minimum of 90 continuous days of Federally mustered service.