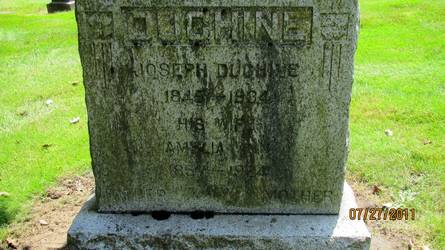 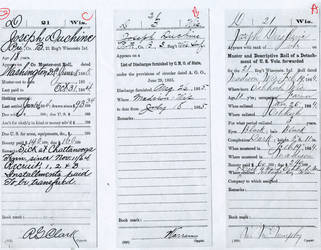 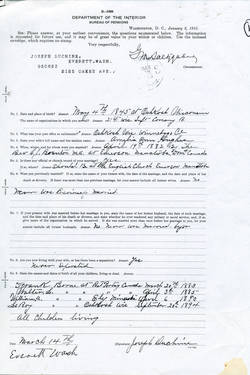 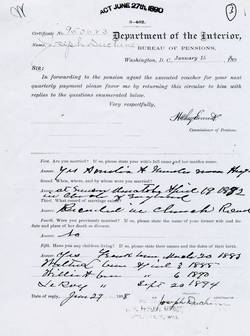 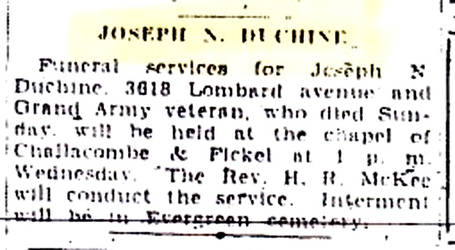 The 21st, a three year "western theater" regiment left Wisconsin shortly after Federal muster and travelled to Covington, KY to aid in the defense of Cincinnati, OH. It saw first action at the battle of Perryville, KY Oct 3/62 to Oct 10/62 during which it was mistakenly positioned where it was exposed to fire by both friend and foe, thereby losing 179 killed wounded and missing. Guard and provost duty at Mitchellville, TN was then undertaken until early December when it was ordered to Nashville. There it assisted in the defense of Union supply wagons attacked by a force of 3500 Confederate cavalry under Joseph Wheeler. Here the regiment was praised as having "behaved like veterans."

The day after repulsing Wheeler's attack the 21st went into the Battle of Stones River, TN Dec. 31/62 to Jan. 2/63. For three days it held an extreme frontal position under heavy enemy fire. Winter quarters followed at Murfreesboro, TN.

In June, 1863 the regiment moved south into Alabama and Georgia, arriving at Chickamauga Creek, GA in time to participate in the second day's fighting. Surrounded, about 70 officers and men were captured by Rebel forces.  The 21st was held in reserve during the Nov. 25/63 battle of Missionary Ridge, TN after which it was stationed on Lookout Mountain overlooking Chickamauga until the spring of 1864.

May, 1864 found the regiment moving with the forces of Union Gen. W.T. Sherman toward Atlanta, GA. It was in the advance on Resaca, GA that May and at Dallas remained under fire for six days, its skirmishers being within 50 paces of those of the enemy. Next, it followed Confed. Gen. J. E. Johnston's retreating forces from Dallas to Kennesaw Mtn. After that battle it was in siege, fatigue and guard duty until the fall of Atlanta. It then participated in the battle of Jonesboro.

On 10/1/64 the 21st pursued the Rebel forces of Confed. Gen. Hood northward before rejoining Sherman during his “march to the sea” and the subsequent Carolinas Campaign. It took part in the Grand Review in Washington, D.C. before being mustered out of existence.

*NOTE: Although technically assigned by a paperwork transfer to an "Unassigned" company of the 3rd following the end of the war and prior to his mustering out, Private Duchine never physically joined this regiment. As such, the history of the 3rd is not covered herein.

Enlistment data noted that Joseph, a farmer was 5'11" in height, had a dark complexion, black hair and black eyes. Being underage for military enrollment, his father had to sign an authorization form for his enlistment which included a $300 enlistment bounty/bonus of which he $60 on the date of his enlistment/muster. Here it should be noted that while in the service of the United States military his surname occasionally appeared as "Dushine" which most probably was how the name was pronounced.

Civil War soldiering did not prove physically easy for the teenaged private. Available muster rolls show him joining his company as a new recruit on 3/7/64 and being present for duty both that month and in April. However, as early as mid April the rigors of campaigning in the field began to take their toll as, in later life when petitioning for a government disability pension based on his soldiering days, he noted that on April 14 while on the march between Chattanooga (TN) and Atlanta (GA) he was beset with varicose veins in his left leg which were caused by suffering excess strain while carrying a log to help build a barricade of logs and dirt. To make matters worse, at the same time he also experienced a rupture in his left testicle.

Physically, his situation did not improve in May. On or about  5/14 during a forced march  his legs were injured, he received a “breach” and experienced pains in his chest and left side which plagued him almost continuously during the rest of his military tenure.

During the remainder of 1864 private Duchine's physical condition continued to deteriorate, resulting in his being sent to a hospital in Chattanooga, TN in July where he was treated for diarrhea/dysentery, fever and general debility. He apparently never returned to his company/regiment during the remainder of the War, but may have been assigned to some limited duty before being sent to another hospital in Prairie du Chien, WI as a convalescent. Whether or not he was still in that hospital when he was discharged from the service on 8/26/65 at Madison, WI is not clear. What is clear, however, is that following his army discharge he returned to civilian life in Oshkosh where the 1870 U.S. Census found him working in a mill and residing with his married sister.

Census data on Joseph during the next thirty years is non-existent. Even so, from pension documents the following chronology has been created: In 1878 he reportedly moved to Minneapolis, MN and, in 1881, to Winnipeg, Manitoba, Canada.  The following year on 4/19 at Emerson, Manitoba he married Amelia Ann Hughes (b. 1857 Canada).  On 3/20 of 1883 the couples' first child Frank was born in Rat Portage, Ontario, Canada. On 4/3/85 their second child and second son, Walter Lucas was also born in Rat Portage. What Joseph's field of employment was during this period is not known.

Sometime during 1886 the Duchines removed from Canada and resettled in the community of Ely located in St. Louis, Co., MN, U.S.A. Their third child/son William Albert was born there on 4/6/90.

By October, 1893 Joseph and family had left Minnesota and settled in Omro, Wisconsin. It was in that month and year the former Civil War private applied for a U.S. Government disability pension based on his inability to earn a living performing manual labor because of varicose veins of the left leg, piles (hemorrhoids) and chronic diarrhea which allegedly stemmed from his period of Civil War soldiering.  In July of 1894 the request was rejected. It would not be until 3/13/97 that a pension of $6 per month would be authorized.

At some point between 7/19/94 and the birth of his fourth and final child/son on 9/20/94 the Duchines moved from Omro to Oshkosh. This fourth son was named Leroy or Le Roy.

1900 found the Duchine family continuing to reside in or near Oshkosh, WI where Joseph continued to farm. A decade later the family was still there, but by this time Joseph's occupation was listed as "laborer.”

It was during 1910, likely later in the year, as census data is generally accumulated by mid- year, the Duchine's left Wisconsin for the final time and moved westward the Puget Sound region of western Washington State. Once there they settled in the Snohomish County City of Everett. Neither the date of the move, nor exactly why the move was made is documented.

The census of 1920 shows the Duchines still in Everett with Joseph employed in a flour mill. Besides wife Amelia, also in the household were sons Frank and William, both of whom were unmarried and working in a siding mill.

On August 31, 1924 in Everett, WA Joseph's wife, Amelia died. The cause of her passing is not known. She was buried in Everett's Evergreen Cemetery.

Slightly over one year after Amelia's death, on 9/15/25, Joseph remarried to Alice Merryfield (nee Tubbs b. 1/17/48 Port Byron, NY). In 1886 she had married one Perry Foster. The two divorced in 1896. She then married a second time to Mr. F.E. Merryfield who died in Seattle, WA in 1922. At the time of Joseph and Alice's marriage both were residents of Snohomish County.

Joseph's Civil War pension which had begun at $6 per month had been raised to $16 per month in mid 1912, $20 in May, 1915 and $24 in 1920. As he advanced in age so his medical frailties continue to advance. As of September, 1929 a medical examination noted him to be "quite" deaf, with failing eyesight, having an enlargement of the left side of his heart, a large hernia which caused considerable suffering and an enlarged prostate. In all, he was in need of almost constant care. Perhaps as a result of this diagnosis, in March, 1932 his pension, which at some point had risen to $75 per month, was elevated to $100 per month.

Joseph and Alice continued to reside in Everett through the 1930 census and into 1934 when, on February 18th the old soldier died in Everett's Providence Hospital and the age of 88 years and 9 months. Cause of death was listed as heart failure due to old age with chronic myo/endocarditic, chronic glomeruler nephritis and hypertension contributing. Joseph was buried in Everett's Evergreen Cemetery beside Amelia.

Following Joseph's death Alice began an unsuccessful campaign to continue receiving part of her late husband's Civil War pension. During this process letters were even written to President Franklin D. Roosevelt pleading for the funds because of her advanced age and need to pay taxes. As late as December, 1935 a routing slip from the White House in Washington, D.C. pointed out that a complete reply to her entreatments had earlier been made: As she had married Joseph after 6/27/05 she was not eligible for pension funds.

Alice M. Duchine died in 7/7/1937 and was buried with her husband at Evergreen Cemetery, Everett, WA.