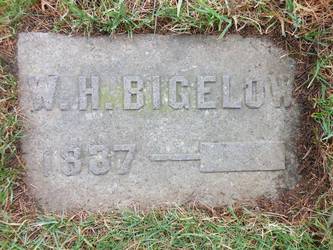 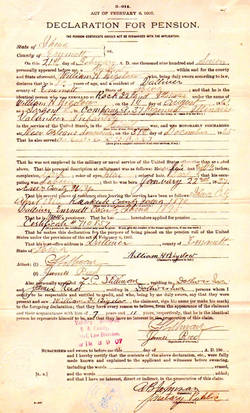 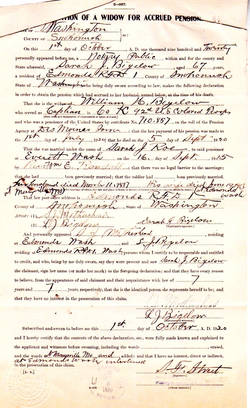 The 37th, a three year western theater regiment known as the "Fremont Rifles" was organized in August, 1861 and mustered into Federal service at Camp Webb, Chicago, IL on 9/19/61. It was composed of ten companies of infantry and two of cavalry.

Almost immediately after Federal muster the 37th departed the state for St. Louis, MO. There it was armed, the eight inside companies with Springfield muskets and the two flanking companies with Colt's repeating rifles (seven shooters).

In October, 1861 the regiment marched to Springfield, MO and forced Rebel forces occupying the city to retreat. The unit then went into camp along the Lamine River.

March, 1862 found the 37th in action at the battle of PEA RIDGE, AR. There, the enemy forces were completely

whipped. Outpost duty at Cassville, MO preceded a summer action at Neosho, MO which resulted in a force of

Rebels and Indians being forced back into the Indian (Oklahoma) Territory. Guard duties along the southwest Missouri

border, frequent skirmishes with Rebel forces and guerilla bands plus the battle of Prairie Grove, AR rounded out the year. During this period the frequent and rapid marches undertaken by the 37th earned them the sobriquet of "The Illinois Greyhounds."

The early months of 1863 found the 37th in Mississippi participating in operations around the City of Vicksburg. With the siege and capitulation of that fortress on 7/4 every man of the 37th marched into the city. Operations up the Yazoo River followed. The unit then helped capture Brownsville, TX after which it performed guard duty along the Rio Grande River.

1864 saw the 37th involved in many actions and movements throughout Arkansas. In October, at Devall's Bluff it went into regular winter quarters. This was something the regiment had never before done.

In January, 1865 the regiment marched to Florida via New Orleans, LA. In April it participated in the siege and storming of Fort Blakely outside Mobile, AL. Other moments and actions throughout Louisiana followed before the 37th again moved into Texas. It arrived at Galveston in mid-year.

After Galveston the regiment proceeded to Houston where it remained until final muster. That date was 5/15/66. From there it moved to Springfield, IL which it reached on 5/31. Final payment and discharge followed.

It saw service in the following locations: Duty at New Orleans, Brashear City, New Iberia and the District of La Fourche until January, 1864. Moved to Brashear City and on duty there until April, 1864. Designation changed to 92nd U.S. Colored Troops 4/4/64.

Regimental losses: No loss totals for officers and enlisted men are available.

William Henry Bigelow was born 1/22/37 in Chesterfield, Essex County, New York. According to family records, his parents were Henry (b. 1795 NY) and Julia A. (nee Levanway b.1795 NY) Bigelow. Another source, however, identifies William's father as C.L. Bigelow (no b.d.) and his mother as Lucy Levann (b. 1808 NY).Herein we are accepting the family found parentage information.

In the U.S. Census of 1850 the Bigelows were residing and farming in St. Lawrence, Lawrence County, NY. A decade later, Julia - by this time a widow - and family were in Rock Island, Rock Island County, Illinois. When and why the interstate move was made is not known. Children under her roof included William (blacksmith), Opher (farmer), Charles and Marcina/Marcena.

On November 20 or 22, 1860 in Rock Island William married to Jane Broderick (b. 1839 IN). It appears the young couple settled in Rock Island after marriage, but whether in a place of their own or on the Bigelow family farm, is not documented.

In 1861, not many months after his marriage, William left his young bride and joined the U.S. Army. The enlistment occurred either on August 8th or the 10th. From this event we learn about William the physical man. He was 5'8 or 8 1/4" tall, had a light complexion, blue eyes and dark hair. His occupation at the time was noted as both teamster and laborer. William’s service entry rank was not private, but sergeant.

On March 7, 1862 Union and Confederate forces fought a large battle at PEA RIDGE (Union)/Leesburg (Confederate), Arkansas. During this action Sergeant Bigelow was wounded "slightly" in one of his legs. Although the wounding was characterized as slight, it was still of a serious enough nature to earn him a furlough home to heal and recuperate. He returned to his company and regiment on June 7th and on 7/20 he was upped in rank and commissioned as a second lieutenant. It appears, however, that he was not "officially" given that rank until June 7, 1863 while his regiment was in route to Vicksburg, MS aboard the steamer Hannibal.  At that time the muster date was made retroactive to 8/13/62.

William did not long remain a 2nd Lieutenant. On 9/3/63 he resigned the lieutenantship, not because of problems, but because he was accepting a captaincy in Company "K" of the 22nd Corps d'Afrique Infantry. One of the first all-black regiments to be formed within the U.S. Army, in April, 1864 the organization's designation was changed to 92nd United States Colored Troops Infantry.

Captain Bigelow's time of service with the 22nd/92nd proved to be fairly benign. From November, 1863 to 1/20/64 he was on some kind of special duty. In August, 1864 he was granted a twenty day leave of absence. Rejoining his company on 9/5, the following month it was ordered to Port Hudson, LA for provost (military police) duty. During this period he received a pay stoppage for $4.65 worth of ordinance stores. Relieved from provost duty on 11/27 the 92nd moved to New Orleans to be mustered out of the service.

Military life behind him, William returned to his wife in Illinois. He and Jane's first child, son Leota James was born in April of the following year.

It appears the Bigelows remained in Illinois until some point after Leota's birth when they removed to Iowa City (Johnson County) Iowa. Why that move was made is not known. They remained there until some-time in early 1870 when they resettled in or near a community called Prairie located in Keokuk County. That is where the census of 1870 found farmer Bigelow and family. Also, on 6/19 of the same year that was where child #2 son Sciota William Bigelow joined the family. Son Otis would be the next born in September, 1871 while son Charles C. would be the last, he being born 11/9/72

On 11/25/90 William, now showing his postal address as Thornburg, Keokuk co., IA began the paperwork to obtain a U.S. Government disability pension based on ailments which traced back to his days of Civil War soldiering. At that time he was claiming total disability from performing manual labor because of rheumatism and kidney problems. Heart problems were thrown in for good measure. Shortly thereafter he was awarded an $8 monthly stipend. That stipend would continue

to grow until, at his passing, William was receiving a $50 per month payment.

In 1895 the Bigelows made another intra state move from Keokuk County to the community of Dolliver located in Emmett County. As is often the case within these life profiles, the why and exactly when such moves were made is not documented.

Sometime in 1908 William and Jane quitted Iowa for good, choosing to move to Edmonds/Allen Snohomish County located along the shores of Puget Sound in western Washington State. Likely the westward move was made because all of their children were residing either Edmonds or other parts of western Washington.

On 6/23/13 in Edmonds, Jane died. Details of her death are not available. She was buried in the Edmonds Memorial Cemetery in Edmonds.

After William's passing Sarah Jane in attempting to claim any remaining funds of her late second husband's pension had to prove to the satisfaction of the U.S. Government that she and William had been legally married. How that pursuit was resolved is not documented.

Sarah Jane died on 4/2/24 in Edmonds, WA. Her final resting place is not known.