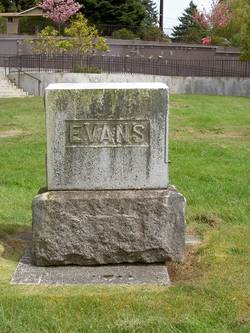 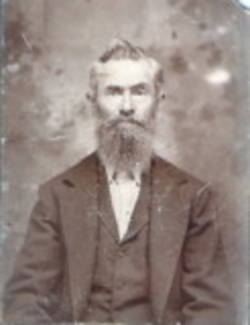 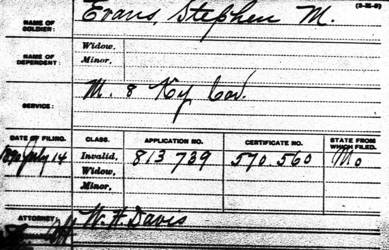 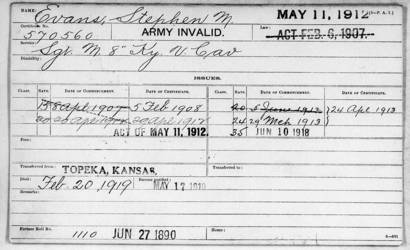 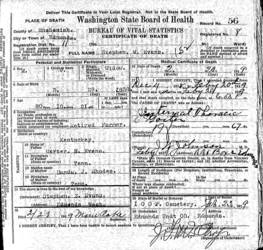 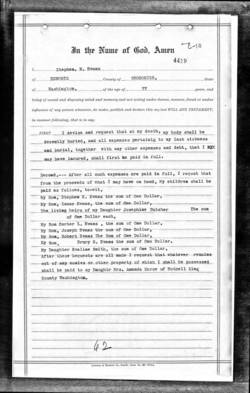 Initial contact with the enemy for the 8th occurred when the 1st battalion attacked and dispersed Rebel forces at Geiger's Lake. In November this third of the regiment moved from Henderson County to Bowling Green in Bowling Green County. During this march Rebel guerillas made a night attack on the Federal camp, but the 8th suffered no losses.

From Bowling Green two companies of the unit went on a scout into Tennessee. There, 100 foraging Confederates were captured.

The principal service of the 8th was its participation in the pursuit and capture of John Hunt Morgan and the Rebel force under his command. After Morgan's apprehension the regiment returned to Russellville. There, after a year of continuous activity, it was mustered into history.

Stephen Madison Evans was born in the month of March. Both 1838 and 1839 appear in U.S. Census data as his birth year.  Because the latter is more predominant, it is that year that has been adopted herein. No specific birth date has been found.

In comparison to the size of other mid-19th century farm families the Evans clan was relatively small. Stephen had two younger siblings: David Evans (b. 1840 Casey Co., KY - d. unk.) and Drury Sampson Evans (b. 6/28/41 Clinton Co., KY - d. 4/26/28 MO*). Interestingly, in 1900 eighty three year old Melinda Evans would report in that year's census that she had birthed only two children, both of whom were living.

The U.S. Census of 1860 found Carter Evans and family farming in Liberty Dist.2 Casey Co., KY. At that time. Stephen was still residing under his parents’ roof.

The next information about Stephen's life comes from 3/12/62. It was on that date that, in Liberty Casey Co., Kentucky that Stephen married. His bride was Elizabeth Henson (b. 3/25/41 Casey Co., KY). The young couple then set up their household in Casey County.

A scant few months after his marriage Stephen left his wife and young son to join the army. His unit and regiment was Co. "M" of the 8th Kentucky (Union) Cavalry. Interestingly, Stephen enlisted as a sergeant rather than a private.  Why was that? Did he have prior military experience? In the U.S. Census of 1910 which also served as a Civil War veterans tally, Stephen listed his service affiliation as "Confederate Army." Was this a misprint? If not his unit affiliation has not been found in available databases............The 1910 notation aside, perhaps the sergeant rank was based on his age. Stephen was older than the average (27.5 yrs.) American Civil War combatant.

Until his military service records are accessed, all we really know about Sergeant Evans' period of enlistment is that he survived The War and returned to civilian life.

Looking at the birth states of the Evans children we get a sense of where the family resided. From 1862 until ca. 1867 (Stephen, Isaac, Josie) they were in Kentucky. During this period on 3/28/67 in Casey Co. Stephen was granted the patent (deed) to 100 acres of farmland Likely, this was a homestead tract.

By the end of 1868 (Nettie) the Evans clan was in Illinois. The census of 1870 noted their Illinois address as Scott County.

As of spring, 1871 Luther) the Evans family was back in Kentucky. However, by spring 1873 (Joseph) they were in Texas.

It appears Stephen remained in Missouri until some point in time between 1900 - when he was in Jackson Polk Co., MO - and 1910 when he was in Edmonds Snohomish Co., WA.

Exactly what had drawn Stephen to the Puget Sound region of Washington State is not known. Also not known is when he arrived here. In the 1910 Edmonds census Stephen noted his occupation being "rancher."