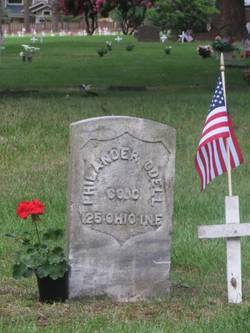 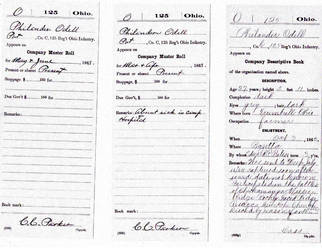 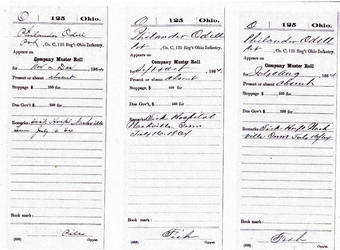 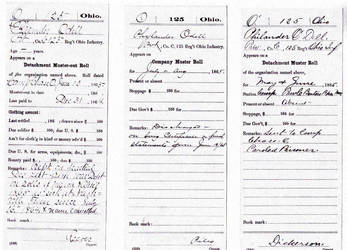 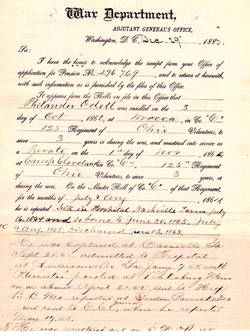 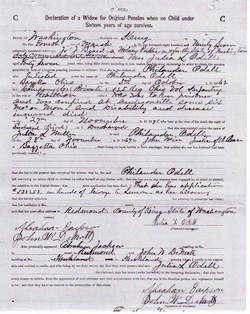 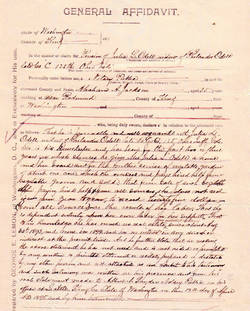 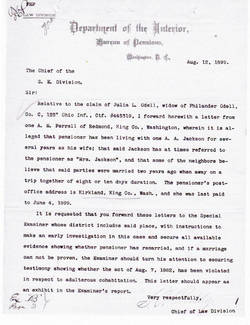 Mustered In: Inf: Not Avail.

While several birth years exist, as best as can be determined, Philander M. Odell was born during 1835. However, as of this writing no specific day, date or month has been found in available documents. His place of birth was in Trumbull County which is located near the far northeast corner of Ohio along the Pennsylvania border.

Available documents provide no information pertaining to Philander's childhood, formative or teenaged years. The first we learn about him comes from 10/3/62 when he, at 27 years of age, enlisted in Captain Edward Bates' company of the 125th Ohio Volunteer Infantry. That organization would subsequently become company "C" of the 125th.

At 27 years old, Private Odell was the spot-on, dead center average aged Civil War combatant. Other vital statistics we learn about him at enlistment are that he was 5'11" in height (slightly taller than average in that day and age), had a dark complexion and dark hair. For the five years prior to enlistment his occupation had been "farmer."

Army life for Private Odell began very benignly. During the final days of 1862 he was always reported as present for duty. Through 1863 the same continued with exception of a period in March/April when he was reportedly sick in the camp hospital. No details are available pertaining to that illness and hospitalization. 1864 would prove to be much different.

1864 started out well for our private. The only item of note during the first half of the year were his duties as company teamster. Then, a July, 16th muster roll entry indicated as of this date, as Federal forces began advances which would ultimately result in the capture of Atlanta, GA , Private Odell had been admitted to  the divisional hospital with scorbutis  (scurvy) and, three days later,   a Nashville, TN hospital with a general diagnosis of “debilities’.”  Exactly when he returned to his unit is not documented, but he was definitely back in the field on 9/24 when, during the battle of Cassville, GA he was taken prisoner by Rebel forces. No details are available pertaining to that capture, but thus began a long, physically painful health journey which would haunt Philander the rest of his life and, perhaps, cut that life short.

It appears that following capture Private Odell was held for three months at a Louisiana Rebel prison known as Camp Lawton Miller. From there he was moved to Savannah, GA, and a prison known as Blackshear. After Blackshear he was sent to the infamous Camp Sumter located in Andersonville, GA. He arrived at this latter location on 12/25/64.

According to Philander's later telling, at Andersonville he was forced to lie/sleep on the ground without shelter. As of 1/1/65 this privation had either quickly lead to his contracting rheumatism in his right hip or exacerbated such an already existing condition. As a consequence of the rheumatic pain continuing to worsen he says he was moved to a barracks on the eastern side of the camp where he remained until examined by a surgeon who additionally diagnosed him as suffering from pleurisy (inflammation of the lungs). As a result of this, he was removed from the prison stockade and placed in a hospital tent located outside of the walls. There he remained while the physician continued to treat him until released. (Here it should be noted that Philander does not indicate whether the release was from the hospital or from Camp Sumter itself. As Union forces never reached the Andersonville facility prior the movement of prisoners from there, ultimately from where he was released in not known.)

As of 3/3/65 Private Odell was being loaded upon the hospital ship R.C. Wood for transportation northward. Accompanying him following his stay in Rebel prisons to freedom was a diagnosis of scorbutis (scurvy).

After 3/3/65 Private Odell's movements become documentally murky. His official exchanged prisoner status came on 4/1. Following that,  a 4/7 entry indicates he was aboard the hospital ship R.C. Wood on his way to a general hospital located at Jefferson Barracks near Lemay, MO. He was admitted into that facility on 4/8 with a diagnosis of chronic diarrhea. Why there would have been such a gap between 3/3 and 4/8 is very puzzling. Further, on 4/11 another entry noted he had been transferred, but to where is not stated. However, on 4/21 he was reportedly paroled at Vicksburg, MS and sent to the hospital at Benton Barracks near St. Louis, MO where he was admitted on 5/11. In all, it seems highly unlikely that the sickly private was doing all this back and forth travelling over such an extended period of time.

To make matters even further unclear, on 4/24 Private Odell was reported to have drowned in the Mississippi River following the explosion and sinking of the U.S.S. Sultana  a vessel  carrying thousands of Union soldiers,  many of them physically incapacitated after being freed from Rebel  prison camps.[1]

Wherever Philander's hospital travels took him, on either 5/12 or 14 he was again transferred, this time to a facility located at Camp Chase near Cleveland, OH. Arriving at Camp Chase on 5/17 he remained there until 6/30 when pay due him since 12/31/64 as well as three months extra pay – perhaps for having served prison time -was disbursed and his military tenure ended.

It appears that after leaving Cleveland Philander returned to Trumbull Co., Ohio. The next we hear from him is 11/26/67 when, in Bazetta Township, he married Julia L. Miller (b. ca. 1849/'50 OH). During their years together they would produce one child, a son Christened Sylvester A. Odell (b. 1869 OH).

The U.S. Census for 1870 found Philander and family farming in Bazetta Township, Trumbull Co., OH. A decade later the tally placed them still in Trumbull County, but with a post office address in Hubbard. Whether the family had moved during that decade or postal boundary lines had been redrawn is not known. Of interest in the 1880 tally is that Sylvester is not listed in the family home.

In mid-May, 1880 while in Trumbull County, Ohio Philander began the paperwork process to try and obtain a U.S. Government disability pension based on physical ailments he traced back to his days of Civil War soldiering. Strangely, while, in 1890 a "census" listing would note that Philander was disabled by rheumatism, there is no indication that this diagnosis ever lead to his receipt of a pension stipend.

Between 1880 and 1887 home life for Philander and family went through a major upheaval. Suddenly, they were no longer in Ohio, but King County, Washington Territory. What had drawn them to the Puget Sound region of Washington plus, when or how the transition had been made, is not documented. Also not known is exactly where in or around Seattle the family settled. The Seattle City Directory for 1887 simply mentioned Philander and son Sylvester as “farmers.”

Did the Odells actually live in Seattle for a time? Available records are unclear on the matter. The first census information covering their residence in the Pacific Northwest comes from 1889 when Philander (P.M.) and Julia (J.L.), just the two of them were listed as residing in Houghton, King County, Washington (Terr. /State). Houghton was a small community located across Lake Washington east of Seattle along the shores of the lake.  Located slightly south of Kirkland, today it is a part of that city. One year later, in 1899, Philander was listed as a resident of Redmond, King County, Washington. Redmond was and is located a few miles east of both Houghton and Kirkland. Again, whether a move had been made or postal or other boundaries had been redrawn to reflect this change of community is not known.

Wherever his actual place of residence whether it was in Houghton or Redmond, when Philander died his place of death was Redmond. His date of death was 11/27/91. The cause was listed as heart failure. Undoubtedly the privations suffered while a prisoner of war had taken their toll on Philander's life. At death he was listed as being only 56 (b. 1835) years of age. Burial was in the Kirkland cemetery.

In 1892, the year following her husband's death, Julia was noted as residing in the north King County community of Bothell with son Sylvester. At that time Sylvester was again listed as being a farmer.

Five, or so, years later, under a Redmond address, Julia began paperwork based on her late husband's Civil War service that would result in her being granted a widow's pension. That paperwork was witnessed by two individuals one being a John McDeMott, the other Abraham Jackson. Two years further on, in 1899, she was receiving $12 per month and this started local "tongues a waggin'."

On June 18, 1899 a letter was addressed to the U.S. Pension office in Washington, D.C. insinuating an adulterous live-in relationship between Abraham Jackson and Julia Odell at a time when she was receiving Federal monies as widow of a Civil War veteran. The letter was forwarded to the pension office's law division and an investigation begun. During that probe Abraham Jackson testified that Julia was his housekeeper and for her providing him these services he provided her with board and room. He further testified that beyond her meager pension stipend she made, possibly, $25 per year from selling vegetables which she grew in garden space provided by him. Beyond this, she had had no additional income and therefore muchly needed per pension. Unfortunately, available documents do not address the outcome of this "controversy."

The U.S. Census for 1900 found Julia in Vincent, (near Carnation) King County, Washington keeping house for Abraham Jackson. Also in the home was Julia's son Sylvester and two sisters - last named Shwarz - who were boarders. A decade later the Vincent household was occupied by widowed farm Julia, her farmer son Sylvester and one of the Schwarz (now Schartz) sisters claiming to be Julia's daughter.........The household location and makeup remained the same in 1920, but at that time Sylvester was listed as  head of the domicile.

1930. The census tally for Happy Valley King County, Washington found Julia residing with her farming son, Sylvester. She died on 2/5/35 in Union Hill (now a part of Redmond, WA). Upon her passing she was about 85 years of age.  There is an “unknown” Odell buried in Kirkland. Whether or not this is Julia is not known because the burial site doe s not have a headstone

[1] Sultana was a wooden, side wheel steamboat. On 4/27/65 the boat exploded in the worst disaster in American maritime history. She was designed for a capacity of 376 passengers, but was carrying 2,155 when her boiler exploded while steaming northward on the Mississippi River near Memphis, TN. 1,192 were killed.]