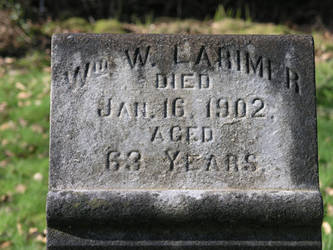 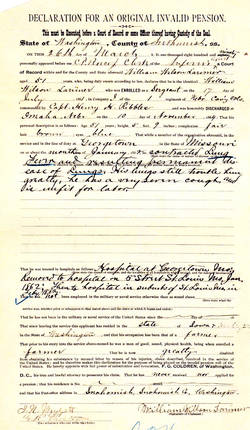 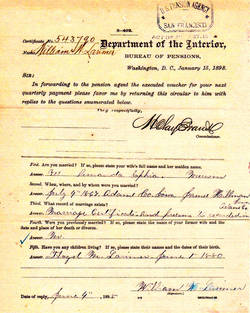 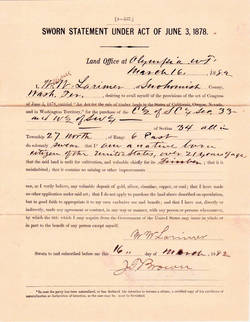 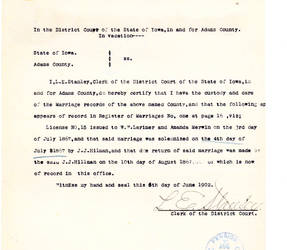 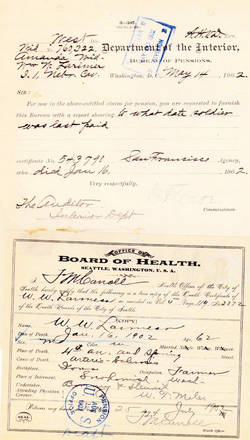 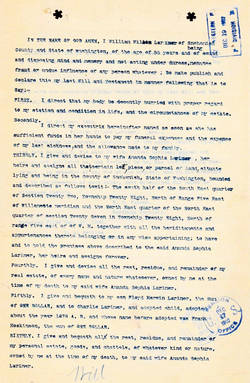 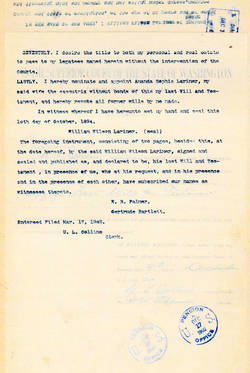 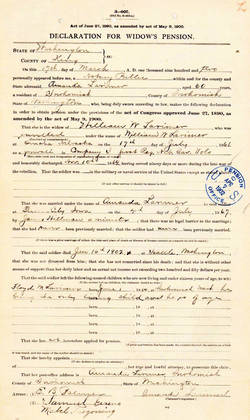 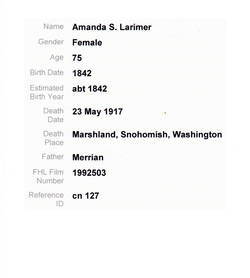 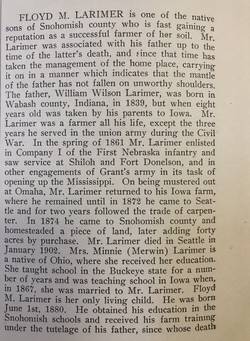 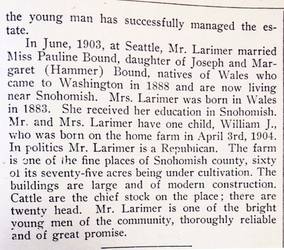 The 1st, a three year western theater regiment, was recruited during the spring months of 1861 from within Nebraska Territory and elsewhere. Mustered into Federal service between 6/11 and 7/21/61, it began its existence as an infantry unit.

The regiment's first battalion embarked from Omaha, N.T. at the end of July, 1861 and headed to St. Joseph, MO. From St. Joseph it moved to St. Louis and thence to Pilot Knob where it was joined by the rest of the regiment.

The 1st served at various points throughout Missouri until February, 1862 when it went into winter quarters at Georgetown. While there it engaged in scouting for bush whackers as well as in expeditions to Warrensburg and Milford. Hard marches and skirmishing resulted in the capture of about 1300 Rebels on their way to join Confed. Gen. Price's army.

In early February, '62 the regiment was ordered into Tennessee. It arrived at Ft. Donelson on the 13th. There it saw its first action with the enemy losing three killed and seven wounded. After the surrender of Ft. Donelson the 1st moved on to Shiloh/Pittsburg Landing, TN where it was actively engaged in the April 7, ’62 second day's fighting. Regimental losses were 4 killed, 5 officers and 17 men wounded and 2 men missing.

The regiment next participated in the advance upon and siege of Corinth, MS after which it was ordered to Memphis, TN. Arriving at that place on 6/17/62 one week later it set off for Helena, AR. In November it moved to Patterson, MO where it went into winter quarters.

Always active in Missouri during 1863, in late August it was moved to St. Louis where its membership was recruited to the strength of a cavalry regiment (12 companies). In November of '63 the regimental designation was changed from the 1st Nebraska Infantry to the 1st Nebraska Cavalry. Mounted and equipped, it was assigned to duty in Arkansas.

Scouting and picket duty occupied the 1st until 1/18/64. It then assisted in the capture of a detachment of the enemy on the Black River.  A three day running fight with Rebel forces in the Sycamore Mountains then followed.

In late May, '64 the 1st moved to Devall's Bluff, AR. While there reenlisted veterans were sent home on 30 day furloughs. Upon their return to the field the regiment moved to Nebraska with its assigned headquarters at Ft. Kearney.

In September of 1864 a detachment of the unit went on a scout in search of hostile Indians on the Republican and Solomon forks of the Kansas River. During this expedition the regiment marched some 800 miles in 23 days.

During the remainder of its term of wartime service the 1st was, by detachments, assigned to different points in Nebraska. From these locales, with the War over, these detachments engaged in frequent scouting and escort duties, guarding the overland mail and stage routes while frequently skirmishing with bands of hostiles.

The welcome order to proceed to Omaha for final muster-out was received on 6/10/66. Final muster took place there on 7/1 of that same year.

William Wilson Larimer was born in the year 1839. His place of birth was somewhere in Wabash County, Indiana. As of this writing no solid birth date or month has been found within available documentation.

It is at his enlistment that we first learn about William the physical man. His vital stats at the time were: 22 yrs. of age, 5' 9" in height, brown eyes and brown hair. As with many of his fellow enlistees, he listed his occupation as "farmer." For having enlisted Private Larimer - company muster rolls would list his first name as William W., Wilson W. or on one occasion Wilheim - would receive a $100 bonus or "bounty."

Infantryman Larimer did not long remain a private. On October 31, 1861 he was promoted to the rank of corporal. That, however, was not to be his final rank as on either May 1st or the 15th of the following year he was again promoted, this time to the rank of sergeant. He would retain this ranking throughout the remainder of his enlistment.

Speaking of his period of enlistment, it proved to be very benign. From February 2, 1862 to February 25, 1862 he was hospitalized in St. Louis with a diagnosis of "debilitas." More on this later.  Beyond that, however, his company muster rolls show him absent only when on escort duty (after his regiment switched from infantry to cavalry) or, in early '64, on detached duty at Devall's Bluff, Arkansas.

As his term of enlistment neared an end Sergeant Larimer was transferred to Omaha, N.T. to await final muster. There, after settling with the U.S. Government for a few cents because of lost or broken equipment, he was paid his $100 enlistment bonus plus $19.35 for an unused clothing allowance and returned to civilian life with the following notation on his record: "(He served) his time as faithfully as a man can."

Documentally, after the service it appears William chose to return to farming in his old stomping grounds of Queen City Adams County, Iowa. It was there on July 4, 1867 he wed to Amanda Sophia Merwin (b. 1/24/42 Morgan Co., OH). Miss Merwin, a school teacher, continued to pursue her profession in Queen City until around April, 1872 when she and William removed from Iowa to Snohomish, Snohomish County, Washington Territory. What prompted the couple to make this dramatic leap from the mid-west to the far Pacific Northwest is not known, but it was to be where both would live out their lives.

The first information we gain about the Larimers following their move to the Pacific Northwest comes from 1878. Childless up to this time, at some point during that calendar year William and Amanda adopted a boy. All we know about the adoptee is that his name was Frank Hoskinson. He does not appear in any Washington Territory/State census tallies and his name appears only once more, that being following William's death. Again, more on this later.

As is often said to be the case with couples who are childless, once an adoption is completed they bear a child of their own. This seems to have been the scenario with the Larimers as on June 1, 1880 Amanda gave birth to a son they christened Floyd Merwin Larimer. (In later years Amanda Larimer would report to a census taker that she had given birth to two children, only one of whom - that child being Floyd - was living. This would hint at a child before or after Floyd either having been still born or dying not long after birth. In either case available documents provide no name for this possible first or second birth.) As with Frank, we will hear more about Floyd at a later time.

On March 16th of 1882 William went to the Federal land office located in Olympia, W.T. and applied for ownership of 160 acres of timber located near their home. The timber "homestead" was apparently sought out as a money making investment. Following payment of $400 ($2.50 per acre) William received ownership of the land on January 20, 1883.

1890. At the age of 52 years  William began the application process necessary if he was to obtain a U.S. Government disability pension based on ailments or other employment impeding physical conditions which traced back to his days of Civil War soldiering. In William's case, he claimed that on or about January, 1862 while in the line of duty at Georgetown, Missouri he contracted lung fever which caused permanent damage to his lungs, leaving him with a severe cough and the inability to perform manual labor for more than one hour at a time. This leads back to the earlier noted period of hospitalization he experienced in early 1862 when he was admitted to and treated in three hospitals located in and around St. Louis. The condition was apparently exacerbated prior to the April, ‘62 battle of Shiloh/Pittsburg Landing, TN when he and his unit reportedly "laid out in the rain" for an extended period of time.  Over the years, where ever he had lived after leaving the service he had received medical treatment for a terrible cough from various doctors including Dr. Folsom in Snohomish. (GAR Cemetery, Snohomish, WA Row 2, Grave 4) After being examined by a medical team in Seattle, WA, in mid-August, 1890 a finding was made that former Sergeant Larimer was plagued by lung disease "third grade" and he was granted, retroactive to 8/16/80, a $12 per month pension stipend.

In 1900 the U.S. Census tallied William and Amanda as residents of the community of Marsh located in south Snohomish County. This was to be Williams’s last census.

William Wilson Larimer died on 1/16/02 in Seattle. Cause of death was either asthma with arteriosclerosis contributing or vice versa. No explanation is available for his passing in Seattle. Likely, however, he was receiving some type of medical treatment there.  Burial was in the Marshland Cemetery in Snohomish County.

Interestingly, when William's will was read it disclosed he was bequeathing funds in the sum of $1 to his adopted son, Frank, and the same to his blood son, Floyd. Did William just have no resources to share with them or had there been a rift between him and his two boys or, both? Documents are silent on the matter.

Almost immediately following her husband's passing Amanda initiated the paperwork in order to continuing receiving at least a portion of William's government disability pension. While, later,  there was some governmental questioning as to how much money per year she was receiving from the timber tract obtained by her late husband, in rather rapid fashion, she was admitted onto the rolls of the pension program, that date being 10/25/02. While her entry level stipend amount is not documented, by 10/16/16 she was receiving $20 per month. Although she sought to have the dollar amount increased it remained at $20 until her passing.

In 1910 Amanda was living in Marsh, Snohomish Co., with son Floyd - a dairy farmer - his wife and young son. Whether or not she remained with them until her death is not known. Amanda died in Snohomish, Washington on 5/23/17. She was/is buried beside William.