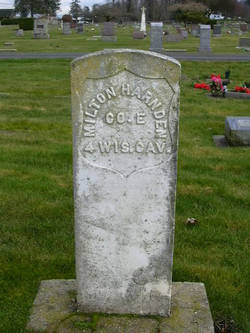 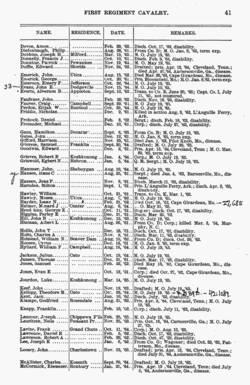 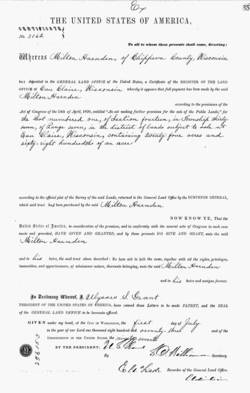 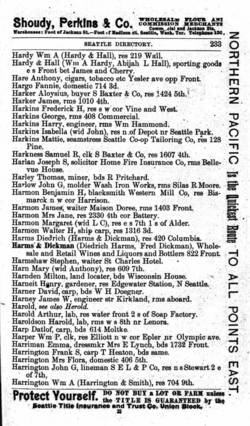 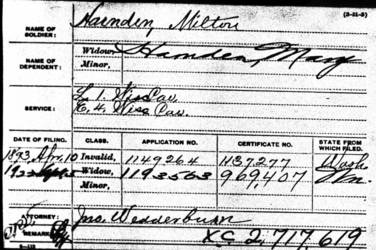 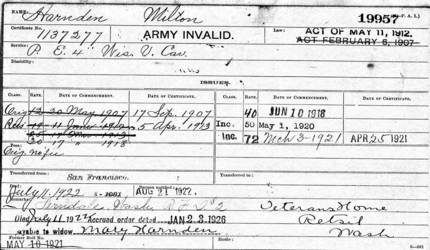 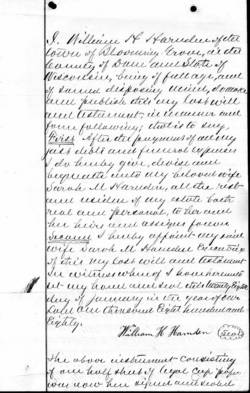 The 1st, a three year western theater regiment was organized during the summer and fall of 1861. It left the state not long after Federal muster and travelled to Benton Barracks near St. Louis, MO to be equipped.

From St. Louis the unit moved to Cape Girardeau and thence to Bloomfield where companies were sent out to various points in Missouri and Arkansas. In August a small detachment was compelled to surrender to greatly superior numbers of the enemy.

At L’ANGUILLE FERRY, AR occurred one of the fiercest engagements of the war when 130 officers and men of the 1st were attacked by 500 Texas Rangers. The small group was overwhelmed with only about 20 escaping.

In September the unit was ordered back to Cape Girardeau. After suffering terrible hardships wading through swamps without adequate supplies, drinking foul water and being burdened by sick members the unit was reduced to nearly half its original strength.

October saw the regiment ordered to Greenville. From there it moved to Patterson where it was stationed in November and December.

1863. From January to May the 1st was stationed at West Plains, Pilot Knob and St. Genevieve, MO. During this period it was engaged with the enemy at Chalk Bluff and at Whitewater Bridge. At the latter place a captain and forty men of the guard ere surrounded by 300 of the enemy, but managed to cut their way to freedom with a loss of 6 killed, 9 wounded and 10 taken prisoner. The battle of Cape Girardeau followed.

In June the 1st reached Nashville, TN. It then took part in movements against Chattanooga. At Chickamauga, GA it helped fold the extreme right during the second day as Union forces retreated.

October saw the unit in a lively engagement with Confed. Gen. Joe Wheeler's cavalry. In this action a number of prisoners were taken. Then came a march to the Tennessee communities of Winchester, Alexandria and New Market.

The following month the 1st repulsed an enemy force advancing on Mossy Creek. This completed the regiment's actions for the year 1863.

1864. January found the unit participating in the battle of Dandridge. Several other engagements preceded stationing at Marysville, Motly's Ford, Madison and Cleveland until the first days of May.

Moving with Union Gen. W.T. Sherman's armies as they moved toward Atlanta, GA the 1st was in the advance on Dallas and was under fierce enemy fire at the Allatoona hills. Action at Burnt Hickory followed. It also acted as part of McCook's expedition to the rear of Atlanta.

The regiment next moved to Calhoun and thence to St. Louis, MO to be remounted. It reached that location on November 9th.

In January, 1865 the 1st travelled to Nashville, TN and from there to Waterloo, AL. Thereafter the regiment was in the front ranks in desperate assault upon a fort overlooking West Point. The fort was captured after a hand - to - hand struggle.

On May 6th a detachment of the unit set out to search for fleeing Confederate President Jefferson Davis. What followed was an exchange of gunfire between men of the 1st and those of the 4th Michigan Cavalry, each believing the other was the enemy. Although Davis was not captured until after the regiments had fired upon one another, many believed the 1st should be credited with assisting with the capture.

The regiment was stationed at Macon GA until May 24. It then moved to Edgefield, TN for final muster.

Organized in Racine, WI in June, 1861, the 4th spent the first nearly two years of existence as a three year western theater infantry regiment. During the spring of 1863 Union Gen. Banks ordered the regiment mounted, so thereafter it served as cavalry.

As cavalry it was in numerous skirmishes until May,’63 when it was ordered to Port Hudson, MS as part of a siege force. Dismounted, it took part in the first assault upon that place. During the second June 14 attack losing 140 of the 220 men engaged in the charge.

The 4th returned to Baton Rouge, AL in late July and passed the following year picketing, foraging and preserving the peace in that region. In November it formed part of a cavalry force to keep the enemy near Mobile from advancing on the troops of Union Gen. W.T. Sherman as they moved towards Atlanta, GA.

The winter of 1864/'65 was spent at Baton Rouge, but in April the regiment was sent to Mobile. After the surrender of that place the 4th was sent on a 70 day expedition through Georgia, Alabama and Mississippi. In July it was ordered to Texas where it prevented smuggling, guarded against Indian attacks and preserved the peace until mustered into history.

ED NOTE:  The birth - to - death biographical profile which follows was created "By Request." As such, it does not draw upon military service, pension and other files housed in the National Archives located in Washington, D.C. Because of this its content is not as detailed as other biographies found within this website.

Although birth years of 1844 and 1848 exist for Milton H. Harnden, he was likely born in 1842. His birth month and date were March 17th. His place of birth was Wilmington, Middlesex Co., Massachusetts.  At times his father’s occupation was listed as shoe maker or farmer.

*[William and Edward served in the 1st Wisconsin Heavy Artillery during The Rebellion. William was in Company
(Battery)”A.” Edward was in Company (Battery) “L”. Both survived the War.]

Although the Harnden family cannot be found in either the 1860 or 1870 census tallies, they moved from
Massachusetts to Jefferson Co., WI sometime before 1869 as that is where and when Hannah died. Both
Edward and William stayed in Jefferson Co., WI and died there.

The first documentation on Milton comes from 9/1/61 when he enlisted in the U.S. Army and was mustered into Company "I" of the 1st Wisconsin Cavalry. Without the availability of his military service records we know two things about his period of service. Firstly, on 8/3/62 at L’ANGUILLE FERRY, AR he and approximately 130 of his comrades were overwhelmed and taken prisoner by the enemy. Secondly, on 4/3/65 he was granted a disability discharge.

Whatever may have been ailing, it didn't keep him down for long as on 11/13/63 he again enlisted in the U.S. Cavalry. On this occasion he successfully served in Company "E" of the 4th Wisconsin Cavalry until mustered out of Federal service on 5/28/66.

Sometime after the War, probably circa 1870/'71, Milton married to Marie Cecelia O Come Nas Sic Quay – or Mary Cecelia as she was commonly known (b. 5/1/52 or 53 Chippewa Falls Chippewa Co., WI) - Beauregard. Mary was of French or French Canadian and Ojibwa Native American Indian heritage and, according to the 1910 census, previously married.

In 1900 Mary noted that she and Milton produced fourteen children of which thirteen were living at the time. However, decade later, in 1920, she claimed having birthed fifteen children, fourteen of whom were then living.

In 1880 the Harndens were farming in Flambeau Chippewa Co., WI. Where they were  residing in 1890 is not known as most of that year's U.S. Census was destroyed by fire, but as daughter Ethel was born in Wisconsin in 1889 and  Helen was born in or near Ferndale Whatcom Co., Washington in 1891 they obviously moved westward sometime between the birth of those two children. Still, exactly when and why they had moved west to the Puget Sound region of Washington Terrritory/State is not known. Perhaps, though, it was to be near the families of a number of their adult children who were already residing in the area.

On 4/10/93 Milton applied for a U.S. Government disability pension based on ailments or other physical handicaps which he traced back to his days of Civil War soldiering. A stipend was subsequently granted, but the dollar amount is not known.

The census for 1900 placed the Harndens in West Ferndale Precinct of Whatcom County, WA. The 1910 and 1920 tallies found them in Mountain View Precinct/Township of Whatcom County near the U.S. Canadian border. This would be Milton’s last community of residence. He claimed his occupation at the time was "farm laborer."

On 7/11/22 Milton Harnden died at home in or near Ferndale in Whatcom County. At passing he was 80.3 years of age. His funeral service under the auspices of The Salvation Army was held at his home. Although his newspaper obituary noted that he was survived by his wife, seven daughters and six sons it also indicated one daughter had died the previous year. Burial followed in the Enterprise Cemetery located near Ferndale.

After her husbands death Mary applied for 9/5/1922/WA and was granted a portion of Milton's Civil War disability pension. As in Milton’s case, the dollar amount of her stipend is not available.

The census of 1930 found Mary residing in the Old Soldiers Home located in Retsil, Kitsap Co., WA. How and when she came to reside there is not known. Mary cannot be located in the 1940 census.

Mary died on 1/24/42. One source points to her passing in Retsil, so she may have been still living there in Soldiers home in 1940. Another, though, says she passed in Bellingham, Whatcom Co. If she were living there in 1940 and died there in'42 she may have been residing with one of her two married daughters who lived in that community. In either case, she was/is buried beside Milton in the Enterprise Cemetery.