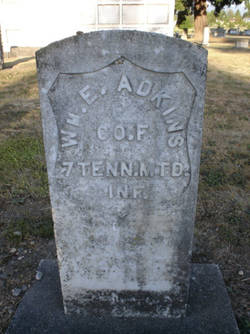 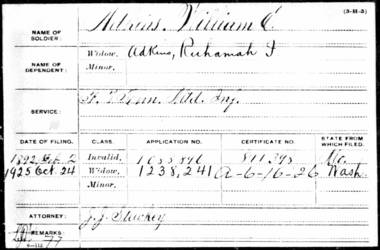 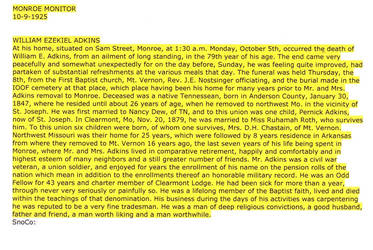 Members of the 7th Tennessee Mounted Infantry - a western theater regiment - were recruited from Anderson, Knox, Campbell, Meigs and Monroe counties. As initially organized, there were only four full companies and a portion of a fifth. During most of its tenure the 7th Mounted. was stationed at Athens, TN.

On 1/29/65 the regiment was surprised when about 200 Rebels dashed into Athens. Reportedly these were guerilla bush whackers under command of Brigadier General John C. Vaughn and General Joseph Wheeler. Although driven off, the enemy captured 20 to 25 of the Federals.

Expecting another attack, two companies of the 2nd Ohio Heavy Artillery were dispatched to Athens. When the artillerymen arrived there they found that many men of the 7th who had fled from the town into the timber the previous day were still absent.

On 3/21/65 the 7th was ordered to guard the mountain passes east of Athens, TN. This was during the period of Union Gen. Stoneman's cavalry raid from East Tennessee into Virginia and western North Carolina.

5/1/65 saw one company of the 7th ordered to Clinton Anderson Co., TN to assist the sheriff in the enforcement of civil laws. The balance of the regiment continued on duty in the mountain passes until July when it was mustered out of Federal service.

In 1850 the Adkins family was residing in Subdivision 16 of Anderson Co., TN. During that year's U.S. Census tally Travis listed his occupation as "sawyer." A decade later, in 1860, Travis and family were still in Anderson County but then residing at Wallace’s Crossroads. It is not known if the Adkins clan had moved during the intervening years or if Subdivision 16 had merely been given a real name!!  In 1860 Travis' occupation was "carpenter."

Travis and Lucy produced six children. William was the second born and the eldest son.

Beyond his birth, the next we learn of William comes from 1865 when he enlisted in the U.S. Army. His unit of service was the 7th Tennessee Mounted Infantry.* Without access to his military records we do not know of any perils which he may have faced while in the service. We do know, however, that he survived The War and returned to civilian life.

Again, an unknown. We do not know where William settled immediately after leaving the army. However, by 1870 he was residing in Anderson Co., Tennessee's District Three, was married and the father of a child.

Based on available documentation, it appears William and Nancy resided in Tennessee until around 1873. At that time they removed from that state to near the community of St. Joseph in northwest Missouri.

The next we learn about William comes from 11/20/79. On that date in Clearmont Nodaway Co., Missouri he remarried. The fate of his first wife, Nancy, is not presently known.

The second Mrs. William Adkins was Ruhamah Isolena Roth (b. 1861 IA). By 1880 the couple had set up their household in Atchison Nodaway Co., MO. Also in the home was William's now ten year old son, Perrie.

William and Ruhamah would produce six children two of whom were living in 1900. Of those six, the names of only two are found within available documentation. The identified Adkins children were:  Donn C. (b. 3/8/85 MO) and Cynthia "Cinnie" I. (b. 9/5/86 MO).

As of 1880 William and his family were still residing in Atchison Nodaway Co., MO. His occupation at that time was "carpenter." As of 1900 the Adkins were farming in Cooper Gentry Co., MO.

According to William's 1925 obituary, he and his family remained in Missouri for twenty five years before, circa 1898, removing to Arkansas. They lived in Arkansas for eight years before - ca. 1906 - coming to the Puget Sound region of the Pacific Northwest. Likely the Northwest move was prompted by married daughter Cynthia - - the last of he and Ruhamah's children  then living -  residing in or near the Skagit County community of Mt. Vernon.

Around 1918 William and Ruhamah removed southward from Mt. Vernon to Monroe located in Snohomish County. Why this move was made is not documented.

William died 10/5/25 in his Monroe home located on Sam Street. Although having suffered from an "ailment of long standing" his passing occurred peaceably, but somewhat unexpectedly. He was aged in his seventy ninth year.  Burial was, not in Monroe, but in Mt. Vernon.

At the time of his death William was receiving a U.S. Government disability pension  based on his days of Civil War soldiering. He had applied for this policy in 1892 while residing in Missouri. Until his pension files are accessed details of this monthly stipend remain unknown.

Immediately after he husband's death Ruhamah applied for and was granted a portion of her late husband's pension. As with William, the details of her stipend are not available.