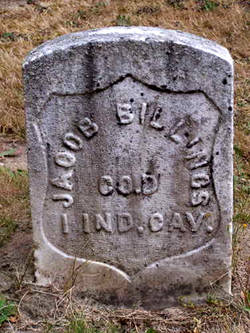 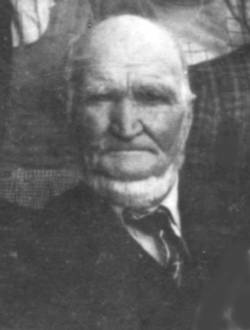 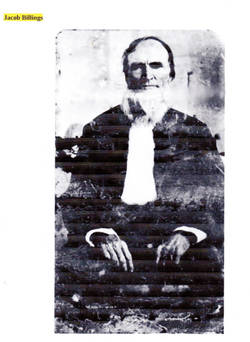 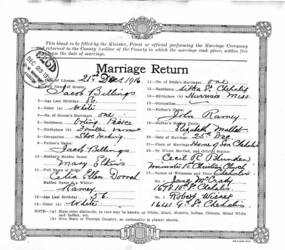 This three year western theater regiment was organized in 1861 as the 28th Indiana Volunteer Infantry. The designation was subsequently changed to the 1st Indiana Volunteer Cavalry before the unit took to the field. The first eight companies were mustered in to Federal service on August 20th and left the state the following day headed for St. Louis, MO.

Once in Missouri they were ordered to Ironton and were there engaged in a sharp skirmish with the enemy at Black River. This part of the regiment was then stationed a Pilot Knob during the fall of 1861 and the winter of 1861/'62. During this period it saw action at Fredericktown.

In February, 1862 this portion of the 1st moved into Arkansas. There, in July, it was engaged with Rebel forces at Round Hill. With the exception of company "C" this part of the regiment remained on duty in Arkansas during the remainder of its term of service. The last year of its tenure was spent at Pine Bluff. It was mustered out at Indianapolis on 9/6/64.

Company "C" which had been detached for escort duty marched with Union General U.S. Grant's army to Vicksburg, MS. It then moved into Louisiana before rejoining the regiment in July, 1864.

Recruits remaining in Arkansas were organized into two companies and stationed at Pine Bluff. There, they participated in a severe engagement in September, 1864. Later, they were stationed at White River and St. Charles before being mustered out at Indianapolis in June, 1865.

NOTE:  The birth - to - death biographical profile below was created "by request". It was created without the assistance of documents housed in the National Archives located in Washington, D.C. As such, it suffers from the depth and details of bios written with such documentation at hand.

Note: The Find a Grave Memorial is in error on the year of Jacob Billings’ birth which was

compiled and prepared by Andy and Ann Marie Liakos who live in Murphy, North Carolina

in Ireland. His parents were probably Jacob Billings and Mary (Elkins)

Billings, although there is at least one suggestion that Jacob’s parents

were Joseph Billings and Mary (Auldrich or Aldrich) Billings.

Camas Area. Book One of Nine. Volume 1 of 2. By Ann Miller. Source

married Mary Jane (Inman) Billings. Joseph would go on to run for

Railroad Commissioner in Montana. Joseph A. Billings died on 06 July,

in Cannelton, Perry, Indiana. She married James B. Inman in 1879, in

July, 1954 in Centralia, Lewis County, Washington. “Lottie” is buried at

the Napavine Cemetery in Napavine, Lewis county, Washington. Find a

Company IN 1st Calvary. He was a Blacksmith and Farrier (later worked

as a shoemaker in civilian life). At the time of his enlistment, Jacob lived

in Posey County. He is said to have enrolled in Evansville, Indiana (28th

Regiment). He was discharged for disability on 10 January, 1863.

April 1862 Jacob Billings served in the capacity of “orderly” for Colonel Baker. He

of Civil War Service from the National Archives.

September 1862 Jacob Billings is shown as a “Saddler” with Company D, 1st Regiment,

Indiana Cavalry. He was present at the Company Muster Roll. The record

remarks read: “Furnished his own horse & horses equipment for the

period for which he draws pay.” Records of Civil War Service from the

gastritis. At the time of discharge, he had been off duty for seven months,

two of those having been confined to a hospital. He was said to be 5’ 8 ½”

tall, and to have had gray eyes. His occupation was listed as “shoemaker.”

Army of the United States Certificate of Disability for Discharge. 1863.

1864 Jacob’s son Henry E. Billings was born. He may have been called

that Jacob had a brother named or nicknamed “Hank”.

is not known. Alice Catherine Billings passed away in November

of 1914, in Tacoma, Pierce County, Washington. Her married name

was Costello, and she lived in Salido, Colorado as of 1912.

Complaint having been entered at this office by John Dahams against

Jacob Billings for abandoning his Homestead Entry no. 7424, dated

19 north, Range 3 west in Platte county, Nebraska, with a view to the

cancellation of said entry: the said parties are hereby summoned to

edition of The Columbus Journal.

14 February 1884 Jacob Billings was a candidate in the election of justices. Returns showed

1885 Jacob Billings was living in Long Island, Kansas. He was a farmer.

Mary, living in the area with their sons, Roy, Lewis, and Willie. Joseph’s

24 October 1885 “Jacob Billings, of Long Island, has opened up a boot and shoe repair

shop in Phillipsburg. Mr. Billings will have all the work he can do.”

21 November 1885 “We believe in protective tariff, to protect our home mechanics. Now

patronize our boot and shoe establishment conducted by Jacob Billings.

and will move into their new shop as soon as completed. Mitchell &

south room will be occupied by Jacob Billings for a shoe shop. These east

side fellows are rustlers but we usually manage to keep run of the shifts.”

Post in Voltaire, Sherman, Kansas. See also a reference to the Phillipsburg

were resumed before Judge Burris this morning. Jacob Billing testified

that he was acquainted with A.W. Little while he lived at McPherson,

Kansas, and that he had trouble with him.” Barbour County Index.

1897 Jacob Billings was a Justice of the Peace in Kalispell, Montana. Annual

opened a boot and shoe repair shop and we found him quite busy. Long

Island has many other good citizens we should like to mention personally,

1898 Jacob Billings was a Justice of the Peace in Kalispell, Montana. Annual

the post was visited by Comrades N.H. Morley of the Soldier’s home at

Columbia Falls, and Jacob Billings of Kalispell. Both of these old

veterans were called upon for a few remarks, and they responded in a

manner that touched the hearts of the “old boys” of Anaconda. The affair

was an exceedingly pleasant and social one.” Anaconda Standard.

1900 Jacob Billings was a Justice of the Peace in Kalispell, Montana. Annual

addition to a store building in Kalispell, Montana. The Kalispell Bee.

1901 Jacob Billings is listed as a Commander of the Nat Lyons Post No. 23,

Grand Army of the Republic. Polk City Directories. Flathead and

township, was accepted, and A. McArthur appointed to fill the vacancy.”

27 November 1901 “Attention, Comrades! All old soldiers in Kalispell and vicinity are

invited to meet with the members of Nat Lyons Post No. 23 on Saturday

Nat Lyons Post No. 23 Grand Army of the Republic. Journal of

Eighteenth Annual Encampment of the Department of Montana. Held

12 August 1902 “Suffrage Club Formed. As a result of the two lectures given by Miss Gail

Laughlin at Kalispell last week, a universal suffrage club has been

formed, consisting of a charter membership of 32, men and women. Of

17 April 1903 “While climbing to the loft in his barn last Thursday night, Judge Jacob

Billings slipped and fell, breaking his shoulder blade and sustaining other

bruises. He was confined to his bed for several days, but is now able to be

No. 23 Grand Army of the Republic. Journal of Eighteenth Annual

Encampment of the Department of Montana. Held at Helena,

1910 Census shows that Jacob was a resident of Kalispell, Flathead County,

Grandpa Billings, and his wife. They are arranging to have a few close

friends with them on the occasion. Few people live to celebrate such an

Grandpa Billings. She was accompanied by her grandson, a boy about

21 June 1912 “Grandpa Billings was a pleasant caller at the Signal office Tuesday. He

history so far as he was concerned. It was the anniversary of the battle of

Waterloo, the Republican National Convention at Chicago and last his

1912, in Camas Prairie, Sanders County, Montana. She is buried at the

Grave Memorial #39307721. Funeral services were held at the Camas

schoolhouse by Reverend Thomas Howland who was said to have

preached a most touching sermon. Pioneers and Early Settlers, Sanders

County Montana, Camas Area. Book One of Nine. Volume 1 of 2. By

1912 Jacob “Jake” Billings moved to the state of Washington. Pioneers and

07 February 1913 “Camas now has two regular justices of the peace. Judge Arnold and

Jacob Billings have received books and documents and are ready for

26 February 1913 “Jacob Billings has returned from an extended trip through the west.”

and the state of Washington. He spent most of the winter in Los Angeles.

weather. In the middle of the day it was very warm and at night quite

cold. He spent some time in Washington and liked that climate very

much. He came from Ronan with a son.” Sanders County Signal.

Dorrah Billings (at age 56). They were married at the home of a son in

Church officiated. Celia was the daughter of John Ramey and Elizabeth

days. He is buried at the Washington Soldiers’ Home Cemetery in Orting,

(Mallet) Ramey. She married Branson Dorrah in about 1880 (Missouri).

County, Washington. “Lottie” is buried at the Napavine Cemetery in

was a shoemaker by trade. Although he was eighty-ish in age, the old gentleman still put in hours on

the bench working at his trade of keeping the Demersville dogs in dry shoes. His name was Jacob

Billings, and his look was that of a patriarch of Biblical days. He had a heavy shock of snow-white

His life history, as gathered from his stories of early experiences, was full of colored and sometimes

hazardous incidents. He was one of those who took part in the stirring scenes of the settlement of

Kansas before the Civil War, when it was touch-and-go whether that newly-established commonwealth

was to be slave or free. His lot in that historical adventure was cast with the free-soilers, and he could

relate many of the scenes enacted when the slavery adherents made armed raids upon their adversaries,

sometimes committing outright murders of abolitionists. Though personally he had never met with

injury in those struggles, he had had several quite narrow escapes with his life.

When the war broke out the young man joined up with the Federal army, and during the struggle he and

his companions were engaged in keeping order in the Kansas and Missouri territory.

After the war ended, Billings settled in Nebraska where he was elevated to the position of justice of the

peace of his township, a job that he held for many years. The name of judge clung to him for the rest of

his life. He was quite elderly when he came to Montana, and after settlement got underway he came to

the Flathead to make his final home.

As a recounter of events of the raw West in the fifties and sixties, the old gentleman always had, and

could hold an audience of interested listeners. He was quite a popular character in the western town,

and was highly esteemed by all who came into contact with him.

Two grandsons, 12 and 13 years old, were the town’s newsboys, selling the local papers, and others that

came to the town. Their connection with their dignified and kindly grandfather made them very popular

as news vendors, so that they had a large patronage, and as a dime was the regular price for any

newspaper – nickles being scorned – they did a very profitable business.