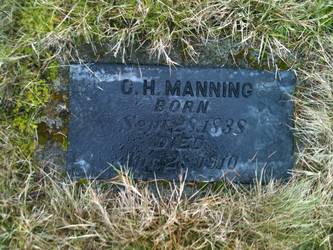 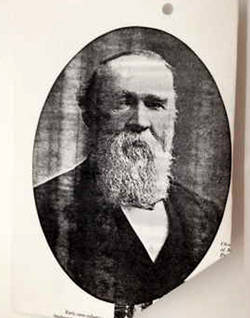 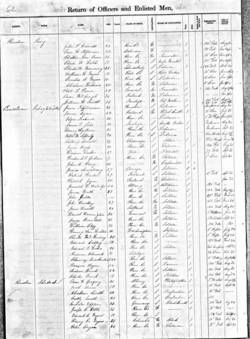 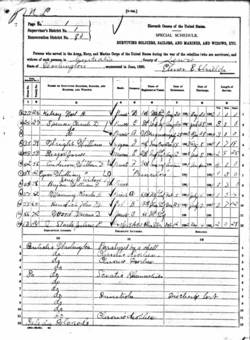 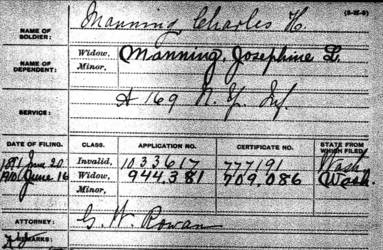 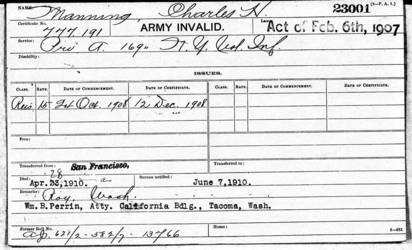 Known as the "Troy Regiment" this three year unit had the distinction of serving in both the eastern and western theaters of the War. It left the state 10/9/62 for Washington City. From there it moved into Virginia and was actively engaged in the defense of Suffolk.

During the summer of 1863 the 169th took part in operations about Charleston Harbor, SC. This included incursions upon Ft. Wagner.

In May, 1864 the regiment moved with the Army Of The James to Bermuda Hundred, VA. Hard fighting with heavy losses followed.

The 169th then fought at Cold Harbor before moving into the trenches in front of Petersburg. There, men were killed or wounded almost every day.

The unit was then selected for the expedition against Ft. Fisher outside Wilmington, NC. Taking part in the desperate, but victorious assault on that stronghold, it lost men, but even more perished after the capture when the fort's powder magazine exploded.

After the conclusion of the war the 169th garrisoned Raleigh, NC. It was mustered out of Federal service in July and later noted as one of the 300 fighting regiments of the War.

ED NOTE: The birth - to - death biographical profile which follows was created "By Request." It draws upon U.S. Census data and family lore - when available - but does not feature information gleaned from military, pension and other files housed in the National Archives located in Washington, D.C. As a result it does not feature the detail and depth found in other biographies found within this website.

While it is not documented, Charles was likely residing with his parents when, on 9/5/64 in Nassau, NY – just shy of his eighteenth birthday - he enlisted in the U.S. Army. As his military service records are not available, we do not have insights into Private Manning's military tenure. However, we do know that he survived the War.

Returning to New York and civilian life, shortly thereafter - on 1/1/66 in Troy Albany Co., NY - Charles married Josephine Louise Lasher. The marriage would be the first and last for both.

As noted by the birth states of the latter Manning children, by 1877 the family had departed Kansas and moved to the Puget Sound region of the Pacific Northwest's Washington Territory. What had drawn them there and exactly when the move was made is not known. Also not known is where the Mannings initially settled, but by June of 1880 when Grace was born - as was earlier noted - they were in or near the community of Puyallup located in Pierce County. There Charles noted his occupation as "carpenter."

1890. A new decade. A new census that in June of that year found Charles and Josephine south of Puyallup residing in Centralia Lewis Co., WA. Again what had drawn them there and when is not known, but they were still there a decade later. At that time Charles listed his occupation as "seed merchant."

1910 found the Mannings back in Pierce Co., but this time in the small, rural community of Roy. It was there that Charles died on 4/28/10. Burial was/is in the Roy Cemetery.

It appears that after Charles' passing Josephine remained in Roy. She died there 12/1/15 and was/is buried beside Charles.