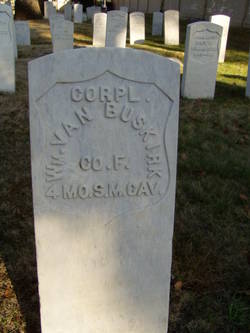 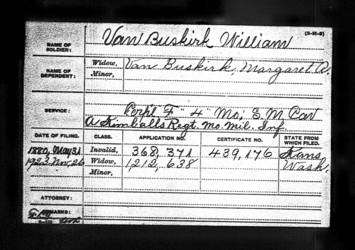 After formation, this three year, western theater regiment remained in St. Joseph, MO until August, 1862. During this period, on 6/2/62, it was involved in a skirmish with the enemy on the Little Blue River. In August the unit was ordered to southwest Missouri. There it joined the Army of the Frontier and, in late November, ‘62 was involved in an expedition into Jasper and Barton counties.

In late December, '62 and into January, '63 the 4th was assigned to the District of Central Missouri. During January it was involved in the defense of Springfield, MO. Two members of the regiment were killed in this action.

Sometime between January and May, 1863 the regiment was moved into central and northern Missouri. There it was assigned guard duty along the Missouri Pacific Railroad. This assignment lasted until October. Also included during this period was pursuit of the Rebel guerilla forces under the command of William Quantrell and Confederate troops lead by General Joseph Shelby. The latter movement involved an action at Tipton located in Syracuse County which included companies "A", "B", "E" and "F".

January, 1864. The 4th was transferred to the District of Central Missouri where – from February 22nd to the 24th - it was in action near Warrensburg in Johnson Co. In October of that year the regiment moved to the defense of Jefferson City which was being threatened by enemy forces under the command of Confederate General Sterling Price. The regiment then pursued Price's force as it retreated to West Port where it was defeated in the largest battle to be fought west of the Mississippi River during the American Civil War. This action was followed, in October, by the battle of Mine Creek, the only full - scale engagement between regular troops of the Union and the Confederacy  to be fought on Kansas soil.

After Mine Creek a large number of Federal Forces moved to Ft. Scott Kansas to recuperate and resupply. Apparently the 4th was one of two Missouri cavalry brigades to take part in this movement. Stationing at Sedalia, MO preceded final muster which, for most of the regiment, came on 4/18/65.

[ED. NOTE: The biographical profile which follows was written and provided by Justin Thomas of Puyallup, WA. Justin is the great, great great grand-nephew of William Van Buskirk. Justin's great, great, great grandfather was William's older brother, Rufus Van Buskirk. During the American Civil War Rufus served in Company "B" of the 51st Missouri (Union) Infantry. Surviving the conflict, in later life he resided in Tacoma Pierce County, WA. He died there on 7/3/07 and was/is buried in The (Old) Tacoma Cemetery.]

In 1840, William VanBuskirk was born to John VanBuskirk and Elizabeth Cook, he being the 5th youngest of twelve children. The 1850 United State Census shows the family residing in Morrow County, Ohio.

In 1852, when William was twelve, the family moved to Savannah, Andrew County, Missouri. That same year, his mother passed away. She was only forty-seven years old.

By the time William was twenty, he had moved to Oregon City, Holt Co., Missouri. He began work as a blacksmith’s apprentice on the 14th of June 1860. *Side note: A blacksmith is one who creates objects from wrought iron or steel by forging the metal, using tools to hammer, bend, and cut (cf. whitesmith). Blacksmiths produce objects such as gates, grilles, railings, light fixtures, furniture, sculpture, tools, agricultural implements, decorative and religious items, cooking utensils and weapons. There was increasing demand for metal work in his day.

When the Civil War started, William VanBuskirk enlisted when he was twenty-two years old into the 4th Missouri State Militia Calvary (Union)* at St. Joseph, Missouri on April 12th, 1862. *Note: Missouri was a border state during the Civil War and sent many men to armies on both sides: The Union and the Confederates. Many battles and skirmishes were fought within Missouri itself.

On the week of April 16th, 1862 four days after enlisting, William was given some leave. On May 10th, 1862 being almost a month since he enlisted into the cavalry, William was detailed as a blacksmith. Sometime between July and August of 1862 he was absent with sick leave in the hospital at Springfield, Missouri. It was also on the date of the next muster that William was sick at a hospital in Casserville, Missouri. On September 9th, 1863 William was promoted to the rank of Corporal. Somewhere between September through October of 1864, William was on extra duty in the Missouri at Jefferson City. Sometime in January or February of 1865, he was out detached serving in Missouri at Sedalia, Missouri. He was discharged from service on April 12th, 1865. During his service time - according to the Veteran Schedules of 1890 - William got chronic piles.

After the Civil War, William VanBuskirk continued to live in Oregon, Holt Co., Missouri until about 1868 when he decided to move to White Cloud, Doniphan, Kansas continuing his occupation work as a blacksmith there. That was when William met and eventually married Margaret Robinson on October 19th, 1869 according to one of their marriage records. He was 29 years old then. It was while living there they had four children together in White Cloud, Doniphan, Kansas: Emma, William Raymond, Ivy Louise and Roxie

William divorced and left his wife, his two daughters Emma, Roxie and only son William Raymond in Kansas. The year and the reason for the divorce is unknown. With his daughter Ivy Louise they moved to Tacoma, Pierce, Washington in early 1900’s residing there until his death on March 28th, 1917 in Tacoma. He died of Tubercular Laryngitis at 11:45 AM. He was buried a day later at Oakland Hill Cemetery in Tacoma, Pierce, Washington. He was 77 years old.