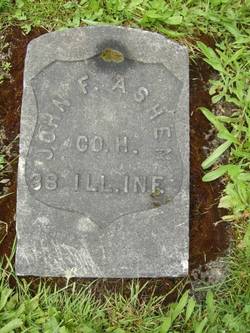 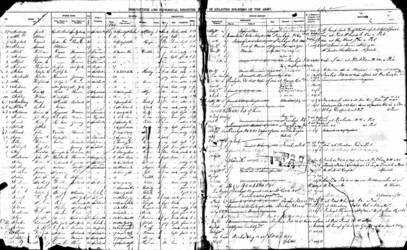 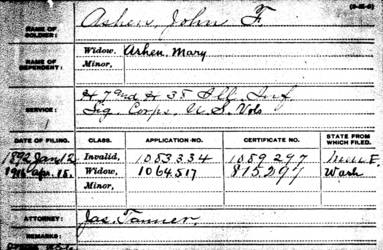 The 38th, a three year western theater regiment, was organized in Springfield, IL in August and September, 1861. It left the state on 9/20/61 to proceed to Pilot Knob, MO. En-route it received its arms. On 10/20/61 it marched to Fredericktown and engaged the enemy in that place. The unit then returned to Pilot Knob and remained there throughout the winter of 1861/'62.

In March, 1862 the 38th moved to Reeves' Station on the Black River. From there it moved into Arkansas before returning to Missouri, a march which took ten days during which a day and a half were spent ferrying the command across two rivers. The unit then participated in the final days of sieging Corinth, MS.

That fall the regiment moved into Kentucky where it fought the (10/8/62) battle of Perryville. During this conflict men of the 38th captured a Rebel ammunition train, two caissons and about 100 prisoners.

In June, 1863 the enemy was engaged at Liberty Gap, TN during the Tullahoma Campaign. It next moved towards Nashville then into Georgia once again for the battle of Chickamauga (9/18 - 20/63). Of the 300 men of the 38th who entered that fights 180 were killed, wounded or missing. The year ended in Chattanooga, TN.

At the end of February, 1864 the 38th re-enlisted as a veteran volunteer regiment. As a result, in April the men returned to Illinois for 30 day furloughs.

Back in the field, the 38th arrived in Nashville, TN in late May. On the 22nd of that month a train bearing part of the regiment was thrown from the track by a torpedo (mine). Several men were injured.

The War having concluded, the 38th moved into Texas. There, at Victoria, it was mustered out of Federal service. It then returned to Springfield, IL for final payment and discharge.

John F. Ashen was born 9/2/40. His birth location at time of muster in to military says Lincoln Logan Co., Illinois.

The U.S. Census for 1860 found John residing in Lincoln Logan Co., IL. He was in the home of one of his mother's relatives namely Charles Goldsmith and family. The Goldsmiths were farmers, so likely John was employed or otherwise occupied as a farm laborer.

In August, 1861 John departed his relative's Lincoln farm and enlisted in the U.S. Army.* At that time we get a glimpse of him as a physical being. He was 5'11" in height- fairly tall for that era, had a light complexion, gray eyes and dark hair. Not married, John listed his occupation as "farmer."

Without Private Ashen's military service records we are unable to say anything about his enlistment with the 38th Illinois Infantry beyond the fact that he survived and, 10/15/63 transferred from the infantry to the U.S. Army Signal Corps. In conclusion, Private Ashen survived The War.

The next we learn of John comes from the U.S. Census of 1870. By that time he was working as day laborer in Helena Lewis & Clark Co., MT Terr. How and when he had gotten there is not known.

Where the Ashens initially settled after departing Canada is not known. By 1900, however, John, Mary and their sons were residing in Great Falls, Cascade Co., MT. There, John's occupation was railroad car repair.

As of 1910, the Ashens were in Seattle, King County, WA. John's occupation at that time was "farmer."

After her husband's death Mary remained in Seattle. During the 1920 census she was living alone. City directories for 1922 and 1924 noted her address as 706 Donavan.

No death record has been found for Mary. The date of her passing and final resting place are not known.

* On the same date John enlisted and mustered into Co. "H" of the 38th Illinois Infantry a Joseph R.D. Ashen did the same. This individual was thought to be John's brother, but he didn't have a brother by that name. As such, the relationship of this individual to John - if any - is currently unknown.