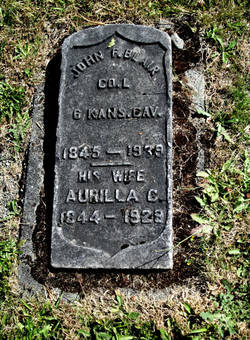 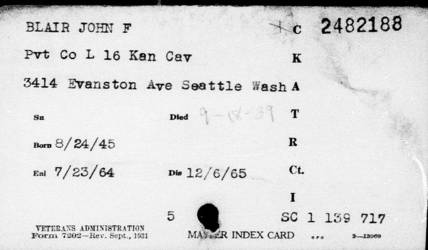 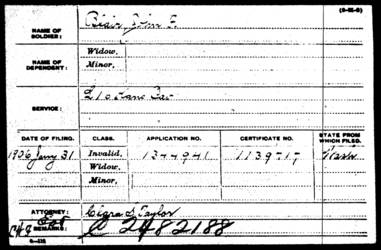 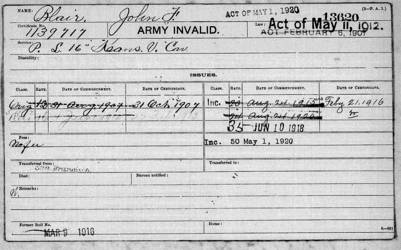 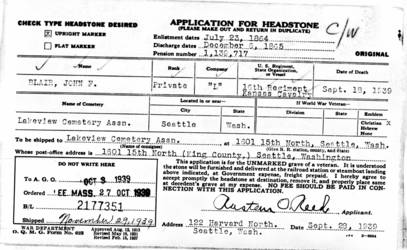 The 16th, a three year western theater regiment, had its inspiration in the infamous 8/63 William Quantrill raid upon Lawrence, Kansas. Recruited from the state "at large", a large portion of its members had seen previous military service. This factor influenced the regiment in terms of discipline and soldierly conduct.

The unit did not see the hard service that was the fortune of other regiments. It did, however, participate in a plains campaign against hostile Indians during the summer of its organization. This included the battle of Big Blue in the vicinity of Westport, MO. Beyond this, the 16th performed post and escort duties during its term of service.

NOTE: The birth - to - death biographical profile which follows was created in August, 2020 during the Covid-19 medical pandemic. It does not feature the depth of detail found in other biographies within this site because military, pension and other veteran-related files housed in Washington, D.C.'s National Archives were not available. At a later time these files may be obtained and the information they contain added to the narrative.

William and Catherine Blair produced at least six children of which John was the second oldest and eldest son. Older than he was Rebecca J. (b. 9/16/42 McLean Co., IL). Younger siblings were: Samuel Arnold (b. 7/23/47 Peoria Co., IL), Alexander Benjamin (b. 12/25/50 Woodford Co., IL), Mathew R. "Mack" (b. 11/53 Woodford Co., IL) and Sarah Elizabeth "Sallie" (b. 12/55 Hardin Co., IA).As exemplified by the birth places of the Blair children, during their child bearing/rearing years William and Catherine moved around a bit within Illinois before removing to Iowa.

In July, 1864 while residing in Ft. Larned, KS young John enlisted in the U.S. Army cavalry.  Without access to his military service records all we can say about his period of service is that he survived The War and returned to civilian life.

Exactly where John settled upon returning to civilian hood is not known. However, it may have been in Nebraska as that was where his first child was born.

As noted by the birth locations of the Blair children, by 1869 the family had quitted Nebraska in favor of Kansas. As of the U.S. Census for 1870 John and family were farming   in or near Walnut Creek Brown Co., KS.

A decade later, in 1880 the Blairs were still in Brown County, but then residing in Padonia. By then John had given up farming to become a miller.

Without the aid of pension records we do not know where the Blairs were living in 1890. Most of that year's U.S. Census was destroyed by fire.

1900. A new century. A new decade. A new census. The dawn of the twentieth century found John - working as a carpenter - and his family residing in Ward 9 Seattle King County, WA. What had drawn them to the Puget Sound region of the Pacific Northwest and when they had arrived here are currently unknowns.

The address and John's occupation were the same a decade later. By 1920, however, the address was simply Seattle King County, WA and 74 year old John had no occupation.

Dropping back a bit, on 7/31/06 John began the paper chase to obtain a U.S. Government disability pension based on his days of Civil War soldiering. The pension was granted, so as of August or October 31, 1907 the old soldier began receiving a stipend of $12 per month. By mid-1918 that payment had grown to $35 per month, but without access to pension records the final size of the payment cannot be determined.

Aurilla/Aurilla died in Seattle, WA ib 12/24/29. She was 85 years of age. Her burial was/is in the Seattle Grand Army Of The Republic (G.A.R.) Cemetery located near the north end of that city's Capitol Hill.

As of 1930 widower John Blair was still residing in Seattle. In his home were his daughter Birdella and her husband.

John F. Blair died in Seattle on 9/18/39. He was 94 years of age. Burial was/is beside Aurilla/Aurrrilla in the Seattle G.A.R. Cemetery.