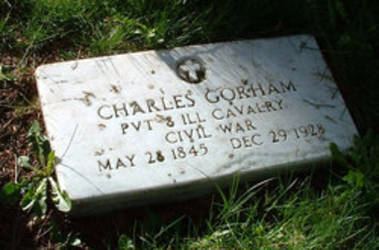 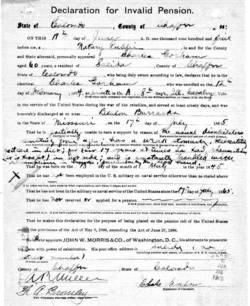 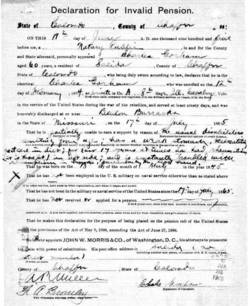 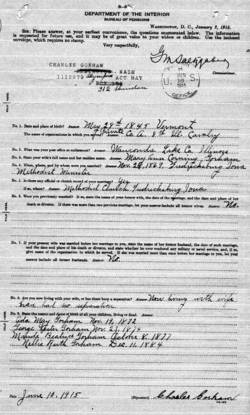 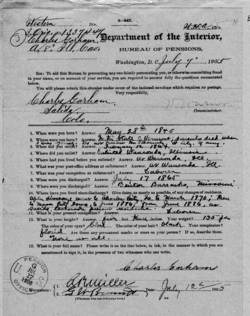 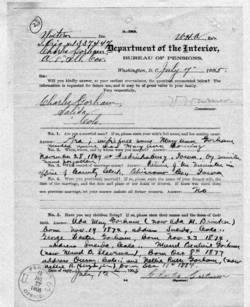 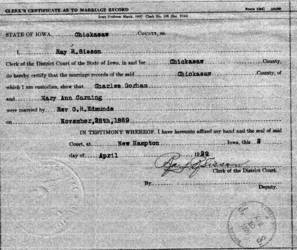 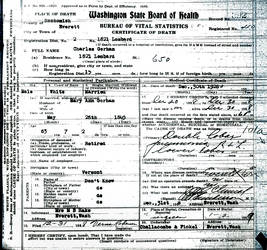 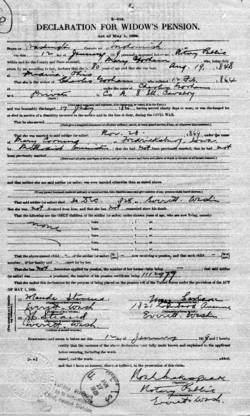 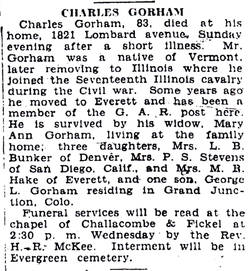 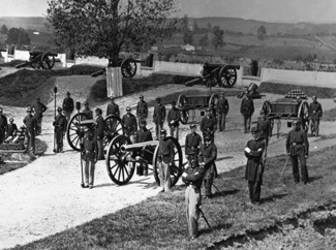 The 8th, a three year "eastern theater" regiment was attached to the Army of the Potomac or assigned to the defenses of Washington, D.C. for the vast majority of its existence. The only exception was a June to October '64 stint with the Middle Department, which meant it was still in the D.C. area.

Three weeks after Federal Muster the unit was ordered to the nation's capitol. Shortly thereafter it moved into Virginia where it had several contacts with enemy troops during the early months of 1862.

Spring '62 found troopers of the 8th on the Virginia Peninsula with Union General Geo. McCellan. There they saw action at Mechanicsville, and performed "important duty" at Gaines Mill and Malvern Hill.

Departing the peninsula, the 8th moved into Maryland where it saw combat at Poolesville, Monocacy Church and Barnesville, Martinsburg, Sugarloaf Mtn. and South Mountain prior the bloody September battle of Antietam/Sharpsburg. Numerous other engagements preceded the disastrous Federal action at Fredericksburg that closed out the 1862 combat season.

During the opening months of 1863 the 8th could claim 27 killed, 71 wounded and 20 missing. That number would increase dramatically during the months ahead as the unit was almost constantly in contact with Rebel forces. By mid year it could note an additional 23 killed, 116 wounded and 37 missing. Mid year also saw the regiment claim the honor of originating veteran reenlistments, as by July a majority of the regiment had volunteered to remain under arms with the Federal Government.  However, delays in making out the veteran reenlistment rolls postponed the actual reenlistment date until 1/1/64.

1864 found the 8th performing provost (military police) duties around Washington, D.C. It remained there until June when it was ordered out to Muddy branch and thence to Monocacy Creek where it had the pleasure of confronting Confed. Gen. Jubal Early during his famous raid on Washington City. The regiment then returned to the nation’s capital where it remained until heading west for final muster and discharge.

As of this writing, Charles Gorham's birth family origins are lost in the mists of history. In 1905 he claimed his birth date was 5/28/45 and that he was born in Vermont. Beyond that, he noted that his parents died when he was young, so although his birthplace might have been Vermont he really didn't know the vicinity or city of his birth. To further cloud matters, nothing can be found on him in either the 1850 or the 1860 U.S. census.

The first documented evidence on Charles comes from February, 1864 when he enlisted in the U.S. Army. At that time he was living in Wauconda, Lake County, Illinois.

Private Gorham's Civil War military history appears to have been benign. There is no available documentation pertaining to serious wounding or illness.

In June, 1886 the Gorham’s departed Iowa for Colorado. Once there they settled in the Chaffee County community of Salida where they were to remain for at least the next twenty four years. During those years, through 1919, documentation notes the 5'3", blue eyed, black haired, florid complexioned Charles employed as a "railroad person," "laborer," and "city teamster." In 1920, at the age of seventy four he had "no occupation."

Although most evidence points toward Charles and Mary moving to Everett, WA sometime after 1920 and before 1928, no definitive documentation of when the move occurred is available. Interestingly, while the 1920 census has the Gorham’s in Colorado, a 6/10/15 pension document has an address of Arlington, WA crossed out and Olympia, WA hand written in. Did the Gorham's come to Washington in the early 1900s, then return to Colorado before once again moving to the Pacific Northwest? We may never know.

Former Civil War soldier Charles Gorham died in Everett, WA on 12/30/28. At death he was 83.7 years of age. Cause of passing was noted as a short bout of "double lobar pneumonia." Place of death was his home located at 1821 Lombard in the City of Everett. Notification of death was by his youngest daughter, Nellie, now Mrs. Merle B. Hake. Charles' Everett Herald obituary noted he was survived by his widow, three daughters and one son.

At some point in his life, likely in the early 1890s, Charles applied for and was granted a U.S. Government disability pension based on illness or ailments he traced back to his period of military service. Although the amount of his monthly stipend is not presently known, following his death Mary requested a portion of that pension and was granted a payment of $40 per month.

In early December, 1938 daughter Nellie wrote the U.S. Government attempting to get an increase in her then 90 year old mother's pension allotment. At that time she noted that Mary's mind was failing and she needed constant care from a nurse, the expense of which she could and her husband could not afford. Any response to the request is not known.

Mary Gorham died in 1940. On the 29th of May she was buried beside her late husband in Everett's Evergreen Cemetery