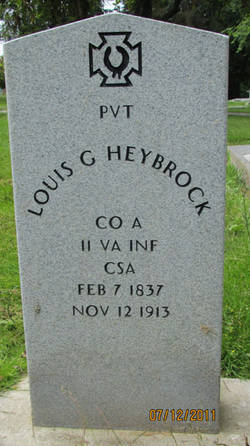 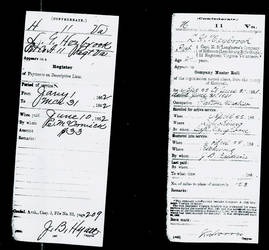 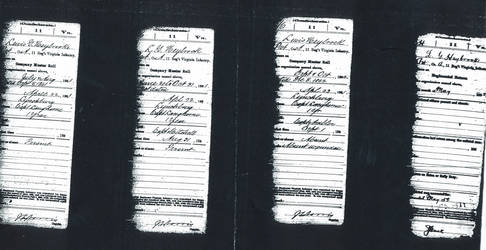 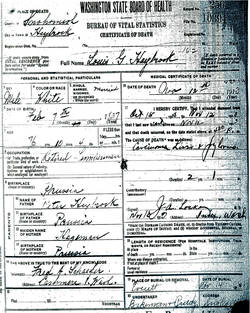 No regimental history has been found on the 11th Virginia Infantry.  All that is known about the unit is that it was an eastern theater regiment initially raised for state service but, accepted into service of the Confederate States of America on 7/1/61.

At that time it was compromised of 10 companies of men who had enlisted for a period of 1 year.  In April, 1862, with the war not having proven to be short and the southern armies facing a manpower shortage as one year enlistments expired, those who decided to remain in the army formed the nucleus around which a new, three year 11th was formed.

The regiment subsequently served to the end of the war in the Army of Northern Virginia.  In that capacity, as part of Pickett’s division it participated in the famous charge of that generals’ troops 7/3/63 at Gettysburg, PA and was with Confed. Gen R.E. Lee when in April, 1865, he surrendered at Appomattox Ct. House, VA.

NOTE: * There are several spellings of this veteran’s first and last names.  First name renditions include Louis and Lewis.  Surname variations include Heybrook, Heybrooke, and Heybrock.

According to his age as noted in Confederate military records, Louis Heybrook was born in Prussia circa 1837.  Another source, however, notes 1839.  For our purposes, we are using the Confederate records.  All that can be inferred about his birth family is that he likely had at least one sibling, a sister.

Nothing is known about his childhood or formative years, but it appears that in 1852 when he was probably 15 years of age, he immigrated to America.  Likely, he settled in the vicinity of Lynchburg, VA.  In April, 1861, noting himself to be a (metal) pattern maker,

Louis enlisted for one year in Capt. M.S. Lanhorne’s Company of Riflemen which was also known as the Lynchburg Rifle Grays.  The unit subsequently became Co. “A” within the 11th Virginia infantry and was likely participated to some degree in all major actions of that army from 1st Manassas to Appomattox Ct. House.  For certain it was present during the 1862 Penninsula Campaign in VA as on 5/5/62 one source indicates Private Heybrook was wounded during the battle of Williamsburg.  Interestingly, his military records do not reflect this wounding.  Whatever combat actions private Heybrook may have experienced during the months ahead, when his term of enlistment expired he opted out of further military involvement.

The 1890 census found the Heybrooks still in Omaha, but by 1900 they had removed to the Puget Sound area of Washington State where Louis owned a sawmill- Heybrook Lumber co.- located 2.5 miles southeast of present day Index, WA on the Great Northern Railway and the Stevens Pass Highway.  (Note: as of 1912 a village known as Heybrook or Heybrock Station claiming a population of 250 had sprung up around the mill and had its own post office.

By 1920, however, it had lost its postal status and, at some point, completely disappeared into the forest of the northern Cascade Mountains.)  Gustav, now employed as a metal molder (pattern maker), was still with him.

Louis G. Heybrook’s obituary dated 11/14/13 said he passed away Wednesday but the exact date of death is not known. He passed away at his home in Heybrook.  The cause of death was listed as liver cancer.  He was approximately 76 years of age.  Mary died 1/24/1923 and is buried beside Louis.