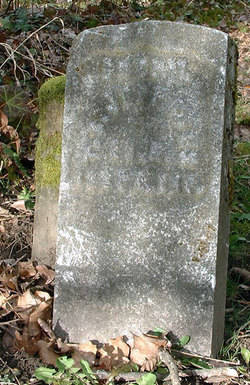 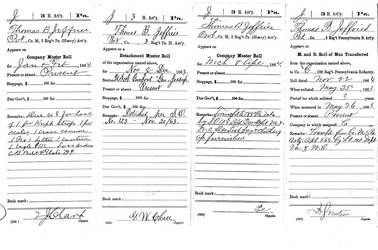 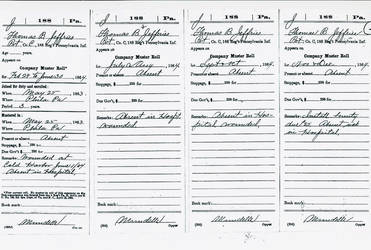 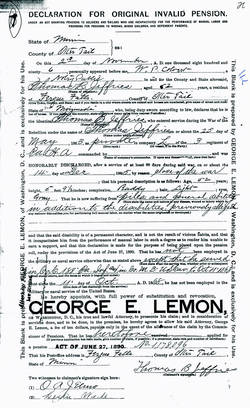 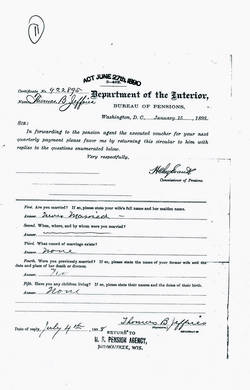 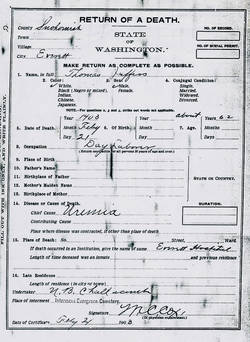 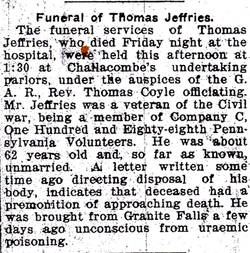 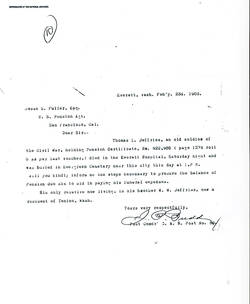 * Note Database shows service in this regiment as Thomas B. Jeffers

The 3rd, a three-year "eastern theater" regiment came from the amalgamation of two different commands. Recruited from the state of Pennsylvania at large, initial inductees were part of the 152nd regiment of the line, i.e. 152nd PA Infantry.  Meanwhile, what later became companies/batteries "A" and "B" had been organized in 1861 as a battalion (at least 3 companies and a field staff) of marine artillery and stationed at Ft. Delaware, Delaware. Late in the summer of '62 authorization was given to increase this battalion to regimental strength as a heavy artillery unit and companies/batteries "D", "G", "F" and "H" were added.

In September, 1862, authority was given to raise a picked battalion of artillery for service at Fortress Monroe in VA. As they were organized and mustered into Federal service, those companies were drilled in both infantry and heavy artillery tactics. In the spring of 1863 the Ft. Monroe group was combined with the Ft. Delaware group to create the 3rd PA Heavy Artillery which was to be headquartered at Ft. Monroe, VA.

Unlike Civil War infantry or cavalry regiments which generally fought together as a cohesive unit, such was not the case in the artillery. Artillery companies/batteries were sent wherever needed. As a result an artillery regiment seldom, if ever, came together as a whole.  In terms of the 3rd, the result was detachments were sent out both by land and sea to serve in any arm of the service and where ever troops were needed.

During 1864 and '65, every company/battery, except "H" which remained at Ft. Monroe, provided detachments for service at the front. They were engaged in Virginia on the James, Chick hominy and Nansemond rivers in numerous battles as well as in the capture of Ft. Fisher, NC. Some troops served on army gunboats and after being captured, perished at the Confederate prison camp located in Andersonville, GA.

As enlistee numbers for the 3rd exceeded army regulations, in the spring of 1864 many original volunteers chose to join in the formation of a new organization, the 188th PA Infantry. Those individuals having departed, the 3rd served before Petersburg, VA. After the close of hostilities, detachments of the unit served as guards for former Confederate President Jefferson Davis during his period of confinement at Ft. Monroe.

While the designation "heavy artillery" generally meant manning large, stationary cannon in forts or other defensive works, the 3rd was much more flexible in dealing with the needs of the army. By the time it disbanded it had been able to furnish detachments for every branch of the artillery service as well as well as infantry and naval arms.


Formed during the first two weeks of April, 1864, based on a core of surplus troops from the 3rd PA Heavy Artillery, this three-year eastern theater regiment was to spend its entire existence with the Union's Army of the James.

On 5/4/64 the regiment moved to Bermuda Hundred on the Virginia peninsula. There it spilled first blood at Proctor's Creek before moving on to fight at Cold Harbor where it lost a large number in killed, wounded and missing. Mid June found the unit active in early attacks on Confederate fortifications surrounding Petersburg. During the next two months, while being in exposed front line positions the unit lost another 80 killed and wounded.

In August, 1864 the 188th moved from Petersburg back to Bermuda Hundred where, during the fierce assault on forts Harrison and Gillmar another 60 were killed and 100 wounded.

Winter of 1864/'65 was spent in camp near Fort Harrison. During this period the monotony of camp life was broken only once when the regiment participated in a 3/65 expedition to Fredericksburg, VA to destroy vast amounts of enemy stores and other property.

With the fall of Petersburg on 4/2/65 Richmond fell to Union forces. The following day the 188th entered the city and assisted in subduing fires that raged throughout the former Confederate capital. Encampment at Manchester across the river from Richmond followed.

In late June, 1865, with the war over, recruits from the 199th PA Infantry were transferred into the 188th  From that time until final muster detachments of the regiment served on guard and provost (military police) duty throughout Virginia.

Available information primarily points toward Thomas B. Jeffries being born sometime in or around 1846. Although, nothing definitive is known about his parentage, birth family, childhood, formative or teenaged years, the 1900 U.S. Census for Everett, Washington noted a T.B. Jiffies (sic. b. ca. 4/45) having had parents both born in Pennsylvania. This could mean that Thomas’ roots trace back to West Pike Run, Washington County, PA where the 1850 census noted a Jeffries family as follows: Job (b. 1811 PA), Rebecca (b. 1816 PA) and children Herman (b. 1835 PA), Eliz(abeth) (b. 1839 PA), Joseph (b. 1842 PA), and Thomas (b. 1846 PA).  Likely this was Thomas’ family, but we will never know for sure.

First documental data on Thomas is in terms of his 5/2/63 enlistment in the U.S. Army. Even that, however, poses questions as; at least one source indicates the enrollment was under the name Thomas B. Jeffers.

The only notation of pertinence during the next year was that in December, 1863 he was absent from his regiment on detached service aboard the steamer, General Jessup.  From reading the history of the 3rd PA Heavy Artillery, likely this duty pertained to manning shipboard artillery.

In April, 1864, Thomas, like many of his 3rd comrades, transferred into the new 188th PA Infantry. As a result, he was wounded in the left shoulder during the early June fighting at Cold Harbor, VA. The wound was apparently fairly serious as he received treatment for it until December 21st.  On that date, he deserted!!

Exactly when Private Jeffries returned to his regiment is not known. However, he obviously did and with no serious repercussions as on 7/1/65, with the war over, he was promoted to the rank of corporal.

Mustered out of Federal service in mid December, 1865, Thomas didn't remain away from the military for long as; on 1/11/66 he enlisted in the 3rd U.S. Cavalry wherein he joined company "M" from Benton Barracks, St. Louis, MO on 3/29/66. While in the cavalry Private Jeffries was stationed at various locations in New Mexico. His term of enlistment, from January, 1866 until 10/11/68, was characterized by bumps, bruises and mild bouts of illness.

After parting company with the 3rd cavalry, Mr. Jeffries whereabouts is unknown for the next twenty plus years. He next surfaced in 1892 when he was in Fergus Falls, Otter Tail County, MN. In that community he was apparently a member of the local G.A.R. post and likely employed in the lumber industry.

Indications are Thomas remained in Furgus Falls until at least 1896. In that year he petitioned the U.S. Government for a disability pension based on ailments/illnesses tracing back to his Civil War service. The request was apparently granted, but the amount of his month stipend is not known,

The census for 1900 found Thomas residing in Everett, Snohomish County, Washington employed as a cook and residing in an unidentified residence. Exactly when and why he had migrated to the Puget Sound area is not known. Most likely, however, he had been lured west by the timber industry.

"Day laborer" and former Civil War soldier, Thomas Jeffries died 2/21/03 in the Everett Hospital. His Everett Herald obituary noted on 8/23 that Jeffries, about 62 years of age, had been transported from Granite Falls, WA to Everett a few days earlier unconscious from the uremic poisoning. With that listed as the cause of death Thomas very possibly drank himself to death.

Burial of Thomas B. Jeffries was under the auspices of the G.A.R. in Everett's Evergreen Cemetery. Never married, Mr. Jeffries left no known survivors.