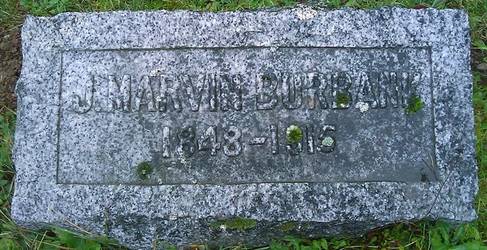 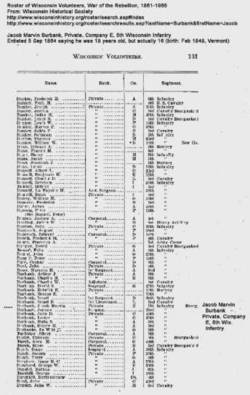 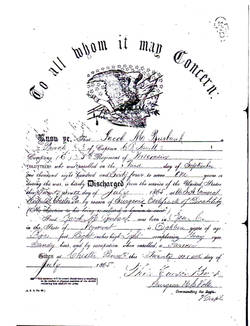 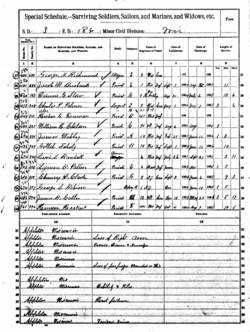 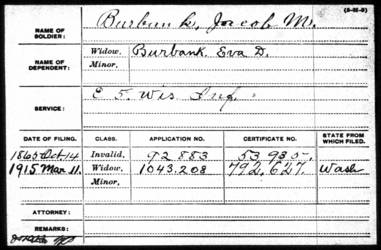 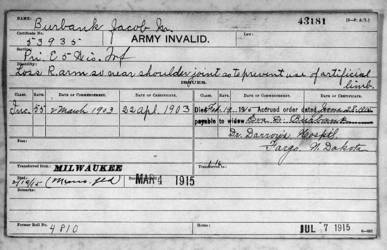 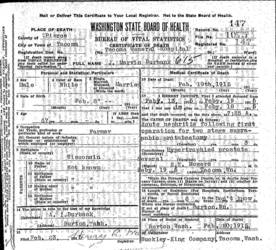 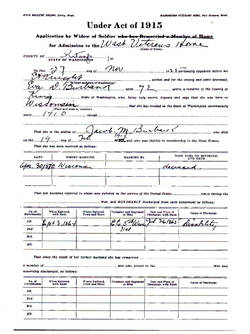 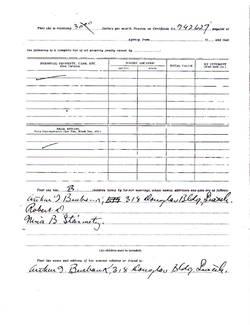 The 5th Wisconsin was a three year eastern theater infantry regiment. Mustered into Federal service on 7/13/61, it left the state on 9/24 and proceeded into Virginia.

During Union Gen. George B. McClellan's 1862 Virginia peninsula campaign the 5th played a conspicuous part in the battle of Williamsburg (5/5). Later that summer it fought at Antietam, MD (9/17). It was also at Fredericksburg, VA in mid-December.

Reorganized into a three company, independent battalion the 5th moved to Virginia's Shenandoah Valley. There it was engaged at Snicker's Gap (7/17), Charles Town and Cedar Creek (10/19). The regiment was then reorganized back to regimental strength.

Pursuing fleeing Rebel forces commanded by Confed. Gen. Robert E. Lee, at Sailor's Creek (4/6) the regiment advanced through a waist deep swamp under murderous fire and compelled the enemy to surrender. It then continued to follow the Rebels until they surrendered at Appomattox Court House (4/9) Final muster was on 7/11/65.

* The 5th was one of but a relatively few Federal regiments that lost more men in combat than it did to disease, etc.

Selden and Fanny had nine children in their home. Eight were their own. One was adopted. The adopted child was Sidney/Sydney H. Burbank (b. 1841 NH*). The names of his natural parents are not known.

As noted by the birth states of the above-named children, at some point in time after January, 1854 Selden moved his family from Vermont to Wisconsin. The U.S. census tally for 1860 found the Burbank family tilling the soil in Mukwa Waupaca County, WI.

On 9/5/64 Jacob, then living in Waumandee Buffalo County, WI, enlisted in the U.S. Army. His regiment was the 5th Wisconsin Infantry. Without accessing his military service records, all we can say pertaining to his period of enlistment is that on 4/2/65 during the Union breakthrough of the Petersburg, VA defenses Private Burbank received a serious wounding of his right arm. The arm had to be amputated near the shoulder which, later, precluded him from being fitted with an artificial limb. The War, soon to be ended, was definitely over for Private Jacob Burbank.

The military behind him, it appears that Jacob returned to his parents' farm in Mukwa, WI. The U.S. Census of 1870 found him under their roof.  Employment-wise he was a school teacher.

During their years together Jacob and Eva produced four children. At the dawn of the twentieth century three of the four were living.

As of 1880 Jacob and family were residing in Appleton Outagamie County, WI. No longer a teacher, Jacob was a sales agent for a company that manufactured school furniture.

At some point in time during the early to mid-1880s Jacob applied for and was granted a homestead tract of land located in or near Oconto, Oconto County WI. Likely the grant was based on his period of Civil War soldiering. Without access to his homestead files, all that we can say about the grant is that Jacob was successful in obtaining the deed (patent) to the land on 8/5/90.

What Jacob may have done with the homestead tract is an unknown, because - by 1900 - he and his family had quitted Wisconsin in favor of Duluth St. Louis County, MN. When and why they had gravitated to that locale are unknowns. In Duluth Jacob noted his occupation as being “collector."

1910. Another decade. Another census. This tally found Jacob, Eva and daughter Nina residing in Miles Custer County, MT. Again, what had drawn them there and when they had arrived are unknowns. In 1910 Jacob did not list an occupation.

The Burbanks did not remain in Montana long after the 1910 census tally as Eva would later note that the family had arrived in Washington State sometime that same year. Probably what had drawn them to the Puget Sound region was the fact that their two adult sons, Arthur and Robert, lived in the area.

As best as can be determined from available documentation, within Washington the Burbanks set up their first household in Tacoma Pierce County, WA. It was there that Jacob died on 2/19/15. Cause of the old soldier/farmer's passing was acute nephritis (kidney problems) experienced following the first part of a two stage operation to deal with a hypertrophied (Enlargement) prostate.

Interestingly, Jacob was buried on 2/20/15, not in Tacoma, but in the Vashon Cemetery located on nearby Vashon Island.  Vashon was/is a large tract of land in Elliot Bay just north of Tacoma and west of Seattle in King County. It appears that it was the Burton area of the island where son Arthur was residing. Daughter Nina, after marrying, would later live there, too.

Dropping back many years, because of having lost an arm during the War of The Rebellion, Jacob began collecting a U.S. Government disability pension as early as 10/14/65. Without his pension files, the original amount of the stipend is not known, but over the years the monthly payment grew apparently reaching $55 by March, 1903.

Almost immediately after Jacob's death Eva petitioned the U.S. Government to continue receiving at least a portion of her late husband's payments. That request was granted on 3/11/15 as the widow Burbank began receiving a twelve dollar per month stipend. During the remainder of Eva's life that paycheck would grow to thirty dollars per month.

And those years?  Eva would live another ten.

In 1920 Eva was living in the Vashon community of Burton with married daughter Nina, her husband and children. By November, 1925, however she was residing at 619 Eastlake Avenue in Seattle, WA. With whom she may have been staying we do not know.

What we do know from November, 1925 is that Eva's health was failing. On 11/27/25 she was given residence in the Washington Soldiers' Home located in the Kitsap County Community of Retsil located across Puget Sound from Seattle. She did not live much
longer.

As a side note, from her Home application we find that Eva could neither read nor write. The widow Burbank signed the application form with her X mark.

** During the American Civil War Arthur served in the 8th Wisconsin Infantry. He died of disease on 1/28/63 in La Grange, TN.

*** During the American Civil War Rollin served in the 8th Wisconsin Infantry. He survived The War.