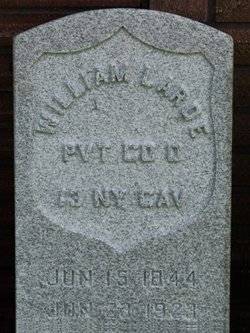 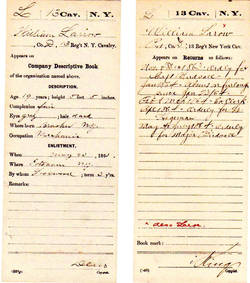 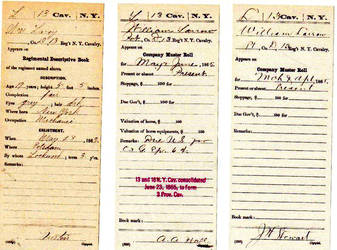 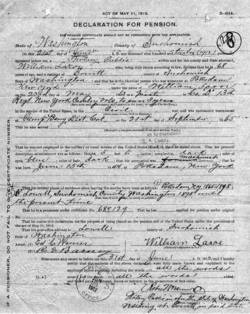 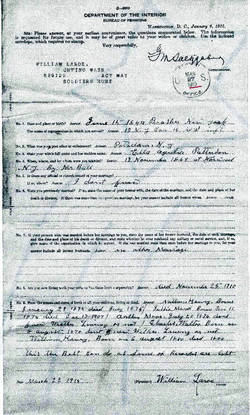 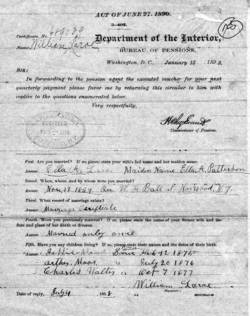 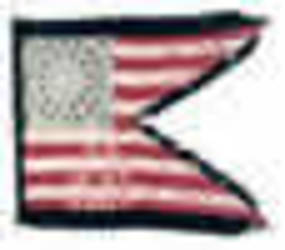 The various companies were chiefly recruited in the counties of New York, Albany, St. Lawrence, Franklin and Erie. The first six left the state on 6/23/63, two others followed in mid August with more departing  during the winter of 1863/'64.

Of the 13th's initial units to leave New York State, six saw first action during the Pennsylvania campaign of June/July, 1863 when Confederate forces under Gen. R.E. Lee moved into Pennsylvania and clashed with Union forces July 1,2 & 3 at Gettysburg, PA. First battlefield distinction for the regiment came when it destroyed the Army of Northern Virginia's pontoon bridges and wagons at Falling Waters, MD 7/14/63 along the Potomac River.

For the remainder of its term of service the 13th served in the defense of Washington City. This, however, proved fatal for some as the regiment saw hard fighting at Aldie, VA. During this action it lost 24 killed, wounded and missing. Later, on at Piedmont, VA, Oct. 19, 1864 in the Shenandoah Valley, another 42 were lost, killed wounded or missing. Finally, at Lewinsville, VA on March 12, 1865 the regimental loss was 20 killed, wounded or missing.

The War having officially ended in May, on 8/17/65, the 13th was consolidated with the 16th New York Cavalry to form a unit designated the 3rd Provision New York Cavalry.  Up to the date of the merger the regiment had participated in more than 30 engagements and skirmishes.

Losses for the 13th were: Killed and died of wounds = 31 enlisted men; died of disease, accidents, in prison, etc. = 1 officer and 98 enlisted men.

The War of The Rebellion officially ended in May, 1865. Efforts then began to take as many regimental units off the U.S. Government "books" as possible. During this process, many units were combined or "consolidated" until they could be mustered out of Federal service. Such was the case with the 3rd New York Provisional Cavalry which was created by special orders of the War Department, dated 6/23/65.

The 3rd existed for slightly over one month under peacetime conditions. Still, it lost by death from disease or other causes 4 enlisted men.

The 1860 U.S. census found the Laroe family, including William, still in St. Lawrence County, but by that time residing in or near the community of Potsdam. It was in that community on 5/23/63 that 5'5/6," fair complexioned, gray eyed, dark haired William enlisted in the U.S. cavalry. At enlistment he was employed in a sash and door factory and noted his occupation as "mechanic." For enlisting he obtained a bonus or "bounty", of which $25 was still due him in July/August of that year.

While with the 13th NY and 3rd NY Provisional cavalry private Laroe's (note: military muster rolls carry his surname as Larow or, as in one instance, Laroy) service record was exemplary, the only notations being of the ilk $1.0l due U.S. for horse equipment (lost or damaged), $4.50 due to sutler, $4.15 due U.S. for transportation from NY to Wash (D.C.), daily duty servant to Major. Birdsall, and absent on detached service from cavalry brigade headquarters. Unlike most Civil War combatants, there is no mention of disease or illness.

The War behind him, in the summer of 1865 William returned to Potsdam and resumed work in the shop/factory where he had been previously employed. At this time his occupational duties were described as fastening mouldings onto doors. He remained there about one year before noticing in the newspaper that the U.S. Regular Army was seeking recruits. As a result, on 7/23/66 William travelled to Watertown, NY and enlisted for three years after an examining surgeon reportedly classified him as physically sound except for a slight curvature of the spine.

Within the regular army private Laroe was assigned to Co. "C" 1st Battalion, 16th Infantry and by the end of October found himself stationed in Savannah, GA where he remained until June, 1868. He was then transferred to Atlanta where he served as company wagoner for a short time.  He next moved to Augusta, then back to Atlanta from whence on 12/31/68 he was moved northward to Ohio to a garrison for new recruits located across the river from Cincinnati. From there he moved to Nashville, TN and, then, back to Savannah in the winter or early spring, 1869. He was discharged from the regular army at Montgomery, Alabama on 7/23/69.

Army life behind him for the final time, William once again returned to Potsdam, NY where he took up residence as a boarder in the home of one Mr. Lewis Carbino.  Carbino was also a Civil War veteran. He is buried in Evergreen Cemetery, Everett, WA).

In September, 1882, William initiated the paperwork process to obtain a U.S. Government disability pension based on his periods of military service. Those first documents claimed that while in Savannah during his post-war service he had contracted rheumatism which still plagued him. Apparently the request was denied.

In August, 1890 William reapplied.  According to his telling, he had not been sick at all while in the 13th/3rd but had noted some rectal itching around the time he re-entered the service, but in his enlistment and later medical examinations he was told there was no problem. It was while stationed at Savannah that his medical problems surfaced. Firstly, while detailed to perform guard duty at an old Confederate fort four or five miles outside the city he became ill with what was said to be malaria. Although not treated in the regimental hospital he was excused from most duty around camp and assigned to care for his captain's horse even though a "negro" did "most of the work, Secondly, because of the rheumatism in his ankles, for about a year he was reduced to using crutches or a cane to move around.  Thirdly, at this time his piles "came on." Finally, when later transferred to Atlanta as company wagoner he was troubled by a swollen back of the left hand which continued to trouble him for years.

In July, 1891, a medical examination determined William’s heart and all his joints were normal. However, in December of that same year a $6 per month stipend was granted on the basis of his continuing to suffer from hemorrhoids or “piles.” As further background on this ailment, it appears that after leaving the regular army William returned to work as a laborer in the shop/factory where he was employed both before and after the Civil War. At this time his hemorrhoids bothered him so much his landlord's wife, Mrs. Carbino, gave him some type of medication to ease his discomfort. By the late 1880s or early '90s, however, his physical ailments precluded him from the door shop/factory work, so his only steady employment, such as it was by this time, if not much earlier,  was with Lewis Carbino.

By 1896 when William applied an increase in his pension his list of ailments included not only hemorrhoids which were exacerbated by constipation, but rheumatism of his left side which affected his heart and shoulders and inflammation of the bowels and bladder which had plagued him for thirteen or fourteen years. By this time, his wife, Ella, had lost one limb - which one is not documented - and he, Ella and their three children were a "town charge." The pension increase was rejected.

According to one document, the Laroe's departed Potsdam in 1898 to remove to Snohomish County in Washington State. This claim, however, is erroneous as the 1900 census found him, then a carpenter, and Ella still in Potsdam. By 1905, though, they were in the community of Lowell, near the City of Everett in the western Washington State county of Snohomish.   Precisely when, and why, the couple had moved westward to Puget Sound country is not known. Perhaps they had moved westward with the Carbinos circa 1902.

The 1910 census found William, still a carpenter, and Ella  in Lowell with  their eleven or twelve year old grandson, Arthur M. Hall residing with them. That same year Ella died from unknown causes. She was buried in Everett's Evergreen Cemetery.

After Ella's passing William remained in the Lowell/Everett area. With whom, if anyone, he was residing is not documented. In 1912 Everett attorney Robert Warner sought an increase in William’s pension stipend. The application was witnessed by Ruben Barney and Robert's brother, Edwin. All three were Civil War veterans. (Robert and Edwin are buried in Snohomish, WA's G.A.R. Cemetery. Barney is buried in California) once again, the petition appears to have been rejected.

By March of 1915 William had departed Lowell and was residing in the Old Soldier's Home in the Pierce County community of Orting near Tacoma, WA. Why and when he had been placed there is not known.

William remained in Orting until his death on June 23, 1923 at the age of 79.0 years of age. At death he was receiving a pension of $50 per month. His remains were transported to Everett, WA for burial next to Ella.