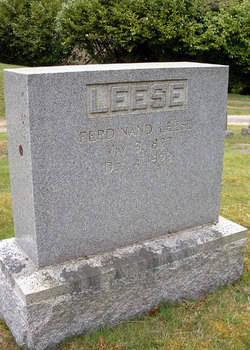 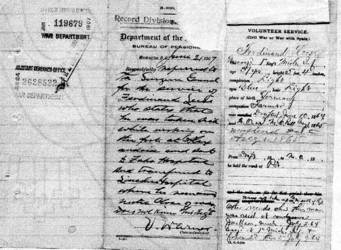 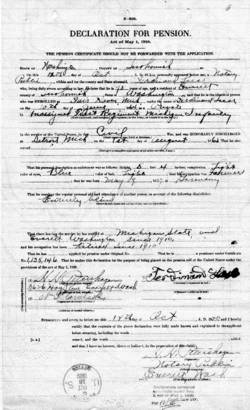 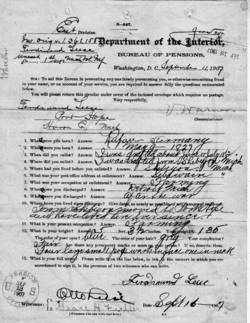 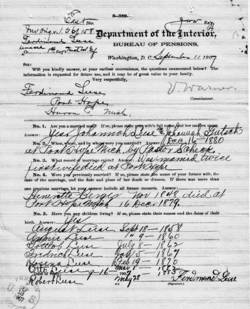 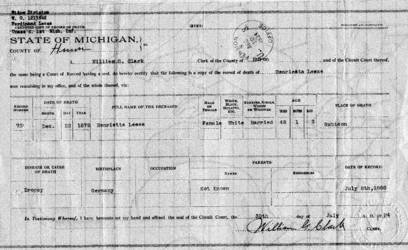 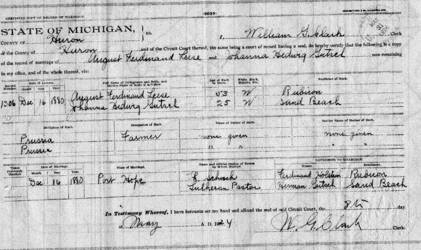 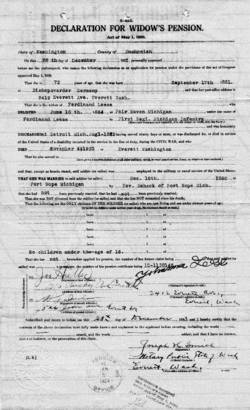 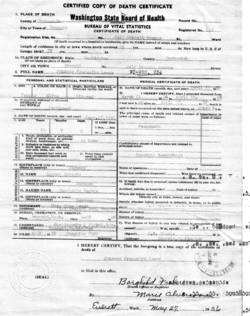 The 1st began its existence as a three month regiment and, on 5/16/61, proved to be the initial unit from a "western" state to reach Washington City. Shortly thereafter it marched across the Long Bridge and helped take control of Alexandria, VA. Participation in the Battle of 1st Bull Run/Manassas, where it lost heavily in killed and wounded, preceded final muster. Reorganization as a three year regiment followed.

From reorganization until the end of the War the history of combat for the 1st reads like a "Who's Who" of the Army of The Potomac within the "eastern" theater.  From first blood at Mechanicsville, VA 6/26/62 through Appomattox Ct. House on 4/9/65 the regiment participated in approximately 50 battles and engagements.

Ferdinand Leese was born on May 9th in Rufau, Germany. The birth year has been noted as either 1827 or '28, but documents signed by Ferdinand himself show the former. Additional information pertaining to his birth family is not available.

Ferdinand reportedly immigrated to America in 1852. Where he initially settled is not known, but by the time of the 1860 U.S. Census he was farming in Sheboygan, Huron County, WI.

In June, 1864 the 5'4", light complected, blue eyed and light haired Ferdinand entered the U.S. Army. One source indicates he was drafted. Another says he enlisted. Perhaps he was drafted and then chose to enlist. In either case, on 7/2/64 he ended up at the Jackson, MI rendezvous/induction station. There he was delegated to the 1st Michigan Infantry, but from muster in to muster out was never assigned to a company.  Why this was done is not known, but perhaps it was his age. At the time he entered the service he was far above average 26.7 years of age for the average Civil War participant.  Although not assigned to a company, Private Leese apparently did briefly take to the field, at least in the sense of being garrisoned in one of the forts that formed the defenses of Washington City. Once there he was “taken sick.” He subsequently spent the remained of his military tenure in hospitals.  In later years he would apply for and be granted a U.S. Government disability pension based upon Civil War illnesses.

Separated from the service, Ferdinand apparently returned to his wife in Sheboygan where they continued to grow their family.   How long the Leeses' remained in Sheboygan is not definitely known. However, when Henrietta died on 12/22/79, the family was living in Rubicon, Huron County; MI. Cause of death was listed as "dropsy." Marie Henrietta was 48 years old at her passing.

The census for 1880 placed Ferdinand still in Rubicon, a 53 year old widower farmer living with his eldest son, August. In the same community were the other Leese children being cared under the wing of daughter Annie.

While there is no census data on the Leese family for 1890 because most of it was destroyed by fire, in 1900 Ferdinand, Johanna and their two sons were still in Rubicon, MI.  Ferdinand’s occupation continued to be farming.

Sometime circa 1909, the Leeses departed Michigan for the Puget Sound region of Washington State.  It was there the 1910 census for the City of Everett showed Ferdinand and Johanna with sons Otto and Robert plus Robert’s wife and three children living in the home. In 1915 the Leese residence was noted as 1322 Rucker Ave.

Nothing on Ferdinand or Johanna has, to date, been found in the 1920 census. However, one pension document indicates that by this year he was entirely blind.

On 12/4/23 Ferdinand died. He was 96.7 years of age. His address at the time was reportedly 1328 Rucker Avenue in Everett. Burial was in that city’s Evergreen Cemetery. .

After Ferdinand's death Johanna continued to reside in Everett, although at the home of her son, Otto, located at 2412 Everett Avenue. It was there she died on 5/22/36 of pneumonia and a cerebral hemorrhage. She is buried beside Ferdinand.