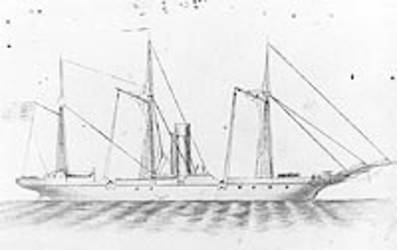 Raised in the central coastal counties of Knox, Hancock and Waldo, this 9 month regiment served all but its 1st months of service in the western theater of the deep south.  The 26th left the state on 10/23/62.  By 12/16 it was in Louisiana.  Proceeding to Baton Rouge, the unit remained there until 3/12/63 when it joined a reconnaissance expedition to Port Hudson.  Traveling by steamer and rail the 26th next proceeded to Irish Bend near Franklin, LA where, on 4/14, it engaged the enemy suffering the loss of 68 men out of 300 engaged.  Battery support at Port Hudson followed until 6/4 when it participated in the assault of that city.  Upon the surrender of Port Hudson the unit remained on duty inside the fortifications until moving north for final muster.  Despite its relatively short term of existence, deaths within the 26th numbered approximately 200.

The ship-of-the-line USS Ohio was launched in 1820.  She moved through three periods of active/inactive service before, in 1851 becoming the Boston, MA Navy Yard’s receiving ship i.e., a location where new recruits either enlisted or first reported for duty.  She remained in that roll until 1875 when she was deactivated.  On 9/27/83 Ohio was sold.

An 820 ton iron screw steamer, the Aries was built in England 1861/’62, apparently as a blockade runner.  On 3/28/62 during her second penetration of the harbor at Charleston, SC she was captured by the Federals.  Commissioned into service of the U.S., Aries was employed in transport service and North Atlantic Squadron blockade duties.  In 1/64 she was one of a large fleet of warships had participated in operations to capture Wilmington, South Carolina’s Fort Fisher.  During the 1st months of 1865 Aries was based in Florida as part of the East Gulf Blockade Squadron.  Decommissioned in 6/65, she served as a merchant ship until final disposal in 1908.

A 400 ton steam frigate, Wabash was built in the Philadelphia, PA Navy yard.  During 1861, she blockaded the Confederacy’s Atlantic coast and participated in the capture of Hatteras, NC and Port Royal, SC.  From 1862-’64, as flagship of the South Atlantic Blockading Squadron she was an active force in the blockade of Charleston, SC.  Civil War service climaxed with her participation in the eventually successful 12/65-1/65 assaults on Ft. Fisher, NC.  Inactivated in 2/65, in 1876 Wabash replaced the USS Ohio as receiving ship at the Boston, MA Navy yard.  Ultimately “housed over” to increase internal space, she served in that capacity until 1912 when she was sold and burned to facilitate salvage of her metal parts.

A 1930 ton steam sloop of war, the Housatonic was built at the Boston, MA Navy Yard.  Commissioned in 1862, she was put to work blockading the harbor at Charleston, SC.  On 2/17/76 anchored off Charleston she was rammed and sunk by the CSS Hunley, the world’s first attack submarine.  Thus, the Housatonic gained the dubious distinction of being the first warship to be sunk by a submersible.

The Frigate John Adams was built for the U.S., by the people of Charleston, SC.  Launched in 1799, from that time on she was active sailing throughout the world.  John Adams served in the War of 1812, The Mexican War and, finally, The American Civil War.  During the latter conflict she acted as a training ship for midshipmen, but also joined the South Atlantic Blockade Squadron.  As flagship for the inner blockage at Charleston, SC on 2/65 she sailed into the harbor after the city was evacuated.  Decommissioned late that summer, she was sold in 1867.

A 1533 ton light draft steam sloop of war, Pawnee was built in the Philadelphia, PA Navy yard where she was commissioned in 6/60.  In 4/61 she was sent to the relief of Ft. Sumter in the harbor of Charleston, SC, but arrived after the fort had surrendered.  Active along the Potomac River and the waters off South Carolina, Georgia and north Florida, but ultimately focusing on the siege of Charleston, SC, for a time she served as flagship for the South Atlantic Blockade Squadron.  Decommissioned in 7/65 Pawnee was recommissioned/decommissioned two more times before being sold in 1884.

The USS Savannah which sailed during the American Civil War was the second vessel to carry that name.  Work was begun on the 1726 ton frigate in 1820, but she was not launched until 1842.  She was active during the Mexican War, but later deactivated.  With the 1861 onset of the Rebellion Savannah was deployed blockading the coast of Georgia.  While so employed she captured two Confederate prizes.  On 2/11/62 she was taken out of active service and placed into use as an instruction/practice ship at the U.S. Naval Academy at Annapolis, MD.  In 1870 she made a final training cruise to England and France before being laid up at the Norfolk, VA Navy Yard.  She remained there until 1883 when she was sold.

According to one source, Melvin Libby was 19 years of age when, in October, 1862, he enlisted in the U.S. infantry.  If that age is accepted, he was likely born in 1842.  His 1902 obituary indicated he was a native of Maine.  As such, likely he may well have been born in one of the where the 26th Maine was recruited.  Beyond that, nothing is known about his parentage, childhood, formative or early teenaged years.

Not being 21 years of age, apparently Melvin joined the army without his parents’ permission.  Although  he left the state with his regiment, during a stopover in the Fortress Monroe/Newport News area of Virginia, he was given a minority discharge.  Private Libby had been in the U.S. Army for a proximately 6-7 weeks.  Melvin Libby’s month of birth was probable July.  In July,  ‘63 when  21 years of age the 5’81/2 “ Libby again enlisted in the military, this time the U.S. Navy.

Of significance in this listing was his stay aboard the USS Housatonic which ended on 2/17/64.  On that date in the harbor at Charleston, SC the Housatonic was rammed and sunk by a 90 lb explosive charge attached to the submarine CSS Hunley.  Officers and three Housatonic crewmen were lost in the historic attack that heralded the onset of the modern age of submarine warfare.

After he exited the military, nothing is known about Mr. Libby until 10/16/86 when, in Tawas City, MI he married Laura M. Defoe (b. ca. 1867).  The union either produced no children or none survived to adulthood.  The Libby’s were next heard from on 9/14/97 when they were living in Minneapolis, MN.  When and why they moved there is not documented.  The same applied to their move to Fairhaven, WA near Bellingham, where they were living in late January, 1901.

At that time Libby applied for a U.S. Government pension claiming incapacitation because of rheumatism, chronic diarrhea, piles, heart trouble, urinary disease and a permanently disabled shoulder due to a dislocation, all of which he based on his months of Civil War soldiering and sailoring.

Apparently no pension had been granted when, on 3/24/02, Melvin S. Libby, died.  Place of death was Everett, WA where he and Laura had moved approximately four months earlier.  Within four months of her husband’s death, Laura had left Everett and was living in Saginaw, MI.  At that time she was applying for a U.S. Government widow’s pension because she had “No real or formal estate or income.”  The outcome of the request is not known.  Nor is the date and place of her passing.