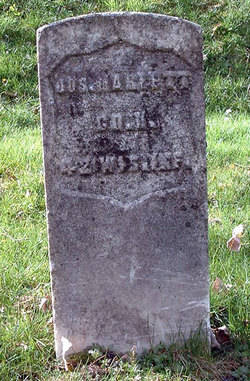 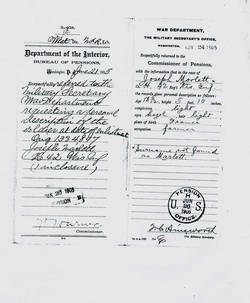 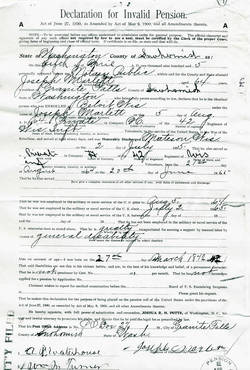 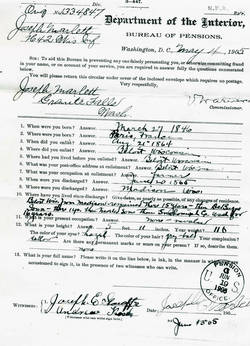 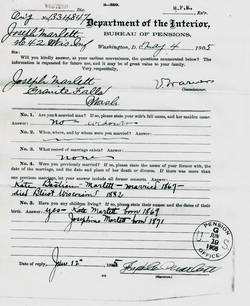 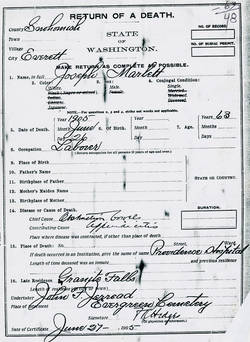 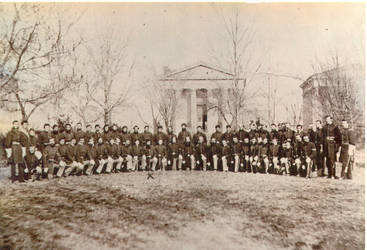 In the spring of 1864 Union forces looked toward bringing the bloody rebellion which began in 1861 to an end. Focus of this effort was to be Union General Ulysses S. Grant's overland campaign which, beginning in May, would sight on Confederate General Robert E. Lee's Army of Northern Virginia/Richmond, VA. In order to free up as many combat-ready troops as possible for this effort, a number of ninety day and one year regiments were raised thereby freeing seasoned troops from garrison, railroad guard, and other similar duties.  The 42nd, a one year unit, was one of these regiments.

This "western theater" unit left Wisconsin for Cairo, IL around 9/20/64. In mid October companies A, C, D, F, and I were sent to Columbus, KY to defend the area against guerilla attacks. Later that same month cos. B, E, G, H, & K were ordered to Springfield, MO where co. B was assigned to provost (military police) duty while co. G was sent to the town of Marshall. Co's H & K were thereafter utilized to forward newly drafted troops to their rendezvous camps while also searching for deserters.

The 42nd was reunited at Cairo, IL during the winter of '64/'65 where it served in a provost/guard capacity until returned to Madison for final muster.  Total regimental losses: 58 enlisted men died of disease, accidents, etc.

Joseph Marlett was born in France, perhaps in or near Paris. His parents were Thomas (b. 1830 France) and Matleen (b. 1830 France) Marlett. At some point between 1850 and 1854 the family departed France for America, ultimately ending up in Beloit, Rock County, Wisconsin where in 1860, Mr. Marlett was noted as a farmer.

At the end of August, 1864, the 5'11" farmer Joseph Marlett entered the U.S. Army. One document says his enlistment was in Newark, WI, but most likely it was in Beloit. Nothing of significance appears to have befallen him during his months of service as he was honorably mustered out and discharged in June, 1865. Even here, however, controversy reigns as it is unclear if he was separated in Madison or Milwaukee, WI.
Exactly where Joseph landed after the War is not known for certain. According to one pension document declaration he initially settled in Madison, WI, but after an undetermined period, resettled in Beloit where he remained for fifteen years.

Sometime in 1888 something went terribly wrong with Joseph's family bonds. Catherine would later write that he left home to go to work in the pinery (woods) and never came back. It appears the burden of being responsible for a large family which included two sets of twins and a wife who was pregnant once again, became too much for Joseph who abandoned them all.

While an exact time line cannot be defined, Joseph likely left Wisconsin for Dubuque, IA where he remained for one year before "travelling some".  The travelling ended in Snohomish County, Washington Territory/State circa 1889.

Census data for 1890 placed Joseph in the Snohomish County community of Granite Falls where he was a boarder in an unidentified residence. That same year, census information for Rock County, WI found Catherine, apparently considering herself to be a widow with eleven year old twins Lewis and Louisa and one year old George in her home.  Considering herself widowed she, the previous year, had applied to the U.S. Government for a pension based on Joseph's Civil War soldiering. .It appears the request was not granted as, on 9/29/96, she once again applied for a widow's pension. Once again, likely her request was not granted as the 1900 census for Beloit noted her source of income as "does washing."

1905, in early May of this year Joseph, claiming to be a widower, and an unemployed invalid because of poor heath, attempted to claim a pension based on his period of Civil War soldiering. In the pension documents he claimed his wife, one “Kate Bastion” had died in Beloit, WI in 1882.

Joseph’s pension request was apparently never granted as he died on the 26th day of the same month in the Snohomish County City of Everett's hospital. Cause of death was listed as “obstruction of bowels” with appendicitis contributing.  Although he was still a resident of Granite Falls Joseph’s burial was in Everett's Evergreen Cemetery. He was buried in the G. A. R. section of Evergreen cemetery which leads us to believe the burial was under the auspices of the John Buford Post in Everett, WA

As a final note, census date for 1910 from Mt. Haley, Midland County, Michigan registered that by this time Catherine had, eight years earlier remarried to Antoine LeDuc (b. 1851 French Canadian). In the home were four of Antoine's children and Catherine's son George.