Reading the names off the tombstones at Port Madison's Kane Cemetery, and the cemeteries at Port Blakely, Island Center and Seabold, is like reading a street map of the island -- Parfitt, Kallgren, Komedal, Ericksen, Logg, Finch, and Grow, among others. All were early families who played an important role in the settlement of the island.

Kane Cemetery, the island's oldest, can be found at the northern end of the island on Lafayette Road near Fay Bainbridge Park. It was founded around 1870 by George Meigs, owner of Port Madison Mill Co., who wanted a place to bury his son.

Up until that time, Dead Man's Island (now Treasure Island), in the middle of the harbor, was Bainbridge Island's only burial site.

But when waves began washing away the bodies that had been buried there, Meigs decided a new cemetery was needed.

He donated an acre of his land on the hill overlooking the town of Port Madison to the local Masonic Lodge (Kane Lodge No. 8) for a cemetery. In 1906, William and Cannie Trimble deeded an additional 11/2 acres to the lodge.

In 1934, Renton Lodge No. 29 in Winslow was designated to manage and provide care for the cemetery. Norm Vance and Bob Ross, who devoted much of their own time and resources to managing the cemetery, were honored at a formal dedication ceremony in 1989.

Today, the Parfitts, Primroses, Rodals, and Nystroms lie among more than 500 gravesites under tall cedar trees. The graveyard is nearly 90 percent full, according to Ron Amdahl, one of the volunteers who oversees the cemetery. "For all practical purposes, we're running out of room," he said.

Kane is noteworthy for having the only columbarium on the island. The black granite wall has several hundred niches for urns holding cremated remains.

While Kane is not a perpetual care cemetery, it is kept in pristine condition by volunteers from the Masons. Amdahl recalls mowing the lawns in the 1950s as a member of the Masons' DeMolay youth group. "Kids enjoyed working in those days," said Amdahl with a sigh.

The cemetery's older section features impressive monuments like the tall rose-colored granite obelisk marking the large Primrose family plot, overseen by the grave of matriarch Jane, who died in 1892.

The most ornate headstone is for tugboat engineer Charles Vickers, native of London, who died in 1875 at the age of 47. The story has it that his friends were unable to find any of his family, so they used his considerable savings to commission an elaborately carved marble statue.

The oldest tombstone in the cemetery marks the grave of John Barker, member of Kane Lodge No. 8, who died Dec. 4, 1869, at the age of 30. There are thought to be older, unmarked graves of bodies that were brought by George Meigs from Dead Man's Island to be reburied in Kane Cemetery. 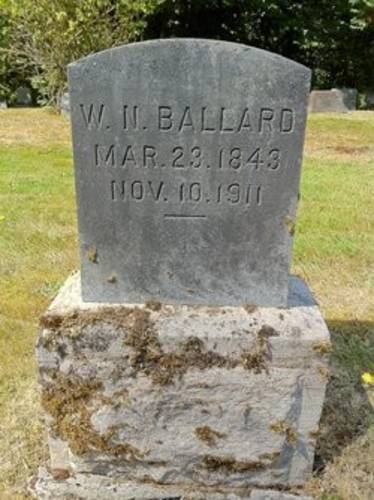