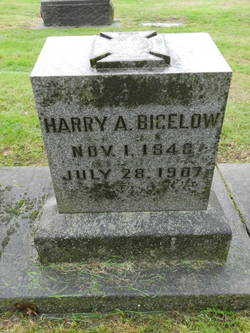 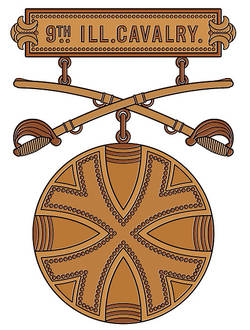 The 9th Illinois was a three year cavalry regiment. During its period of Federal service it was assigned to the western theater of the American Civil War.

In February, 1862 the regiment left Illinois and proceeded by rail to Benton Barracks, MO. From there it moved to Pilot Knob where it had its first skirmishes with the enemy.

June saw elements of the 9th drive off Rebel forces who attempted to capture a valuable train. Near the end of the year it was in action at Lagrange and Helena, AR. It concluded 1862 with a November confrontation with Confederate forces at Saulsbury, TN and another at Moscow.

1863 confrontations with Rebel forces included Coldwater, MS (July) and Grenada (August). In October it drove the enemy from their fortified positions at Salem, MS while in November was again in action at Saulsbury, TN.

March, 1864. The 9th veteranized and the men headed home on thirty day furloughs. Returning to the field the 9th formed a portion of the rear-guard during the Federal retreat from Guntown, MS (6/10). At Old Town Creek, in July, it acquitted itself.

Late in 1864 the unit took part in the fierce fighting at Franklin, TN (11/30). At the great battle of Nashville (12/15 - 16) it participated in a well-directed and successful attack on an enemy redoubt. The result was four artillery pieces and one hundred fifty prisoners captured. The regiment then took part in pursuing the fleeing Rebs.

Henry "Harry" Adelbert Bigelow was born 11/1/1848. The place of his birth was Scipio Hillsdale County, MI.

According to the book ““A Volume Of Memoirs and Genealogy of Representative Citizens of the City of Seattle and County of King Washington” (page 393), early in his youth Henry found educational opportunities in the rural area of Michigan where his family resided, to be lacking. As a result, at the age of fifteen he said good bye to his parents, his sibling and the family's Scipio Hillsdale County, MI farm and headed for Illinois.

The year was 1864 and America was struggling with a great civil war. The call for more Federal troops to suppress The Rebellion filled his "enthusiastic heart" and prompted him to enlist for a period of one year in the U.S. Army. Here it should be added that financial matters may also have had a hand in the enlistment as not only was there the lure of a thirteen dollar per month paycheck, but by 1864 substantial enlistment bonuses or "bountys" were being offered and paid to new enlistees!

Private Bigelow's unit was the 9th Illinois Cavalry. Without access to his military service records we are in the dark regarding any trials and tribulations he may have faced while in the saddle. We do know, however, that he survived The War and returned to civilian life and his educational studies in Illinois.

In October, 1869 in company with one of his sisters and her family, Henry boarded a train bound for San Francisco, CA. Arriving there, he climbed aboard a steamship and sailed north to the Puget Sound region of the Pacific Northwest's Washington Territory (WT).

What had drawn Henry to Seattle, WT is not known, but by the spring of 1870 he was reportedly "engaged in merchandising with one of Seattle's leading firms and (he) continued with that firm for several years." What that "merchandising" may have entailed is not specified, but it may have involved deliveries as in 1879 and 1880 Henry noted that his occupation was "teamster."

Henry married in King Co. WT on September 18, 1873. His bride was Emma Katherine Hall. Emma had been born on 12/20/1853 in West Lebanon Warren County, IN. When, where and how the two had met are unknowns.

Henry was connected with mercantile interests from 1870 to 1890. In that latter year he was appointed deputy United States marshal for Seattle by the William Henry Harrison presidential administration. He reportedly performed his duties as deputy in "such and efficient and forcible manner " that he was chief deputy in the state for three years.

Retiring from the marshal's office, Henry turned his attentions to the business of real estate brokerage. He remained in this field until July, 1897 when the lure of the Alaskan gold fields saw him set sail from Seattle to Dawson in Canada’s Yukon Territory by way of Ft. St. Michael, AK. He was fated, however, not to reach the great metropolitan gold metropolis on account of low water in the Yukon River. Thus, he turned his attentions to seeking his fortune in Rampart City located on Manook Creek in America's Alaska Territory.

After a year of prospecting and having secured interests in twenty one mining claims Henry returned to Seattle. In company with his son D. Earl and three others he embarked southward in a row boat. Travelling night and day the group covered the one thousand miles to St. Michael in twelve days. From there they sailed by steamship to Seattle.

Back in Seattle Henry once again became involved in real estate. On 2/5/1900 he also began the application process to receive a U.S. Government disability pension based on his year of Civil War soldiering. Based on available documentation we know that, for some reason a monthly stipend was not granted, but without access to Henry's pension files details of that omission remain unknown.

Former Civil War cavalry trooper Private Henry A. Bigelow died on 7/26/1907. Details of his passing at the age of 58.8 years are not available. Burial was/is in Seattle's Lakeview Cemetery located on the north end of that city's Capitol Hill.

After Henry's passing Emma remained in Seattle. On 6/6/1908 she completed the paperwork to begin receiving a U.S. Government widow's pension based on her late husband's Civil War service. This petition was granted, but again, without access to pension files details of her stipend are not known.

The U.S. Census for 1910 found Emma in Seattle. Under her roof were son, D. Earl Bigelow and her widower father, Walter B. Hall. A decade later, 1920, found her still in Seattle, but with her brother, Walter L. Hall and his wife, acting as the heads of her household.

Emma Katherine Hall Bigelow died in Seattle King County, WA on 8/30/1922 at the age of 68.8 years. As it was with Henry, details of her passing are not available. She was/is buried in Lakeview Cemetery beside Henry.