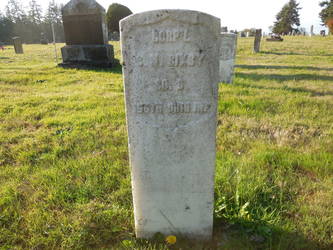 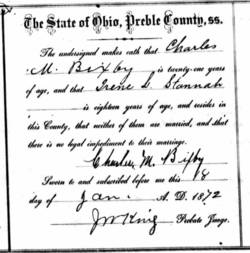 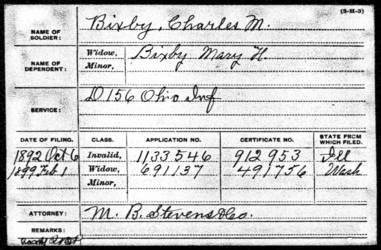 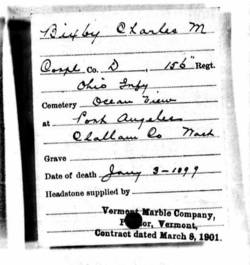 During the spring of 1864 Union Gen. U.S. Grant began massing troops to move southward into Virginia on his Overland Campaign. One year later, this movement would bring an end to four years of bloody American Civil War.

In order to field as many "seasoned" troops as possible, many units were pulled from rear echelon positions. To fill the voids created, many short term regiments were recruited and assigned to, primarily, non-combat duties. The 156th Ohio was one such unit.

The 156th Ohio was a one hundred days infantry regiment. It served in the Department of West Virginia from July through September, 1864.

On 5/20/1864 companies "A" through "F" and "H" proceeded to Cincinnati, OH where they were assigned to guard duties. Companies "G", "H", "I" and "K" remained at Camp Dennison on guard and patrol duty until Rebel forces under General Morgan appeared in the vicinity of Cynthiana, KY. The four companies were then sent to Falmouth, KY.

The seven companies remained on duty at Cincinnati until 7/18/1864 when the entire regiment was united and moved to Paris, KY. It was then ordered to Maryland.

Arriving in Maryland on 7/31/1864 the 156th went into camp near the city of Cumberland. There, on 8/1/1864 it had an engagement with the enemy at Folk’s Mill. Regimental losses were slight.

Information pertaining to the life of Charles Merritt Bixby is, at best, sketchy. To begin with, he was born in Ohio during 1846, but no specific month or date of birth has been found in available documents.

As best as can be determined, Nathaniel and Sarah produced two children. Firstborn was Charles. Second was Sarah D. Bixby.  Sarah was born 3/8/1851 in Preble County, OH. She died there on 8/30/1852 some seven months after the death of her father.

In 1850 the Bixbys were residing in Israel Preble County, OH. A decade later, in 1860, the widowed Sarah and Charles were still in Preble County, by then in the community of Washington.

On 5/17/1864 Charles left home and joined the U.S. Army. His regiment was the 156th Ohio Infantry. A 100 day regiment, the 156th had only minimal contact with Johnny Reb and Corporal Bixby safely returned to civilian life. However, without accessing his military service records, it cannot be determined if he faced any trials and tribulations during his wearing of the blue.

The next available information on Charles comes from the 1870 U.S. Census. At that time he was in the Peoria County, IL community of Brimfield employed as a carpenter. According to information unearthed by Nancy Lang, a researcher in the Clallam County, WA Genealogical Library, during this period he may have been residing on the farm of one Myron Wyman and family.

As of 1/18/1872 Charles was back in Preble County, OH. That was when and where he married to Irene L. Stannah. No personal information is available on her.

After marrying, Charles and Irene appear to have settled in or near the Preble County, OH community of Eaton as that is where Maud Merrill Bixby was born on 10/30/1872. That having been said both mother and daughter then disappear from the written record. Irene is not heard from, again, while Maud shows up in Milwaukee, WI on 5/10/1900. That was where and when she married to Hester Henry Parsons.

Charles remarried on 5/3/1877 in Sauk County, WI. All that is known about the second Mrs. Bixby is that her name was Mary H. Pelton and she was born in the state of New York during the year 1850. Charles and Mary would seemingly remain married until Charles' death. More on this, later.

The U.S. Census of 1880 placed Charles - alone - in Minneapolis Hennepin County, MN. Again, his occupation was noted as being "carpenter." The Chicago City Directory for 1885 listed him as carpentering in that city.

On 10/6/1892, in Illinois, Charles began the paperwork to receive a U.S. Government disability pension based on his days of Civil War soldiering. At the time of the pension filing Mary H. Bixby was noted as Charles' spouse. While we know a stipend was granted, without accessing his pension files details of the financial payments remain unknown.

Charles Merritt Bixby died on 1/3/1899. At death he was “around” fifty two or fifty three years of age.

At the time of his passing Charles was in Clallam County, WA. How, when and why he had gone there are more unknowns. He was/is buried in Port Angles' Ocean View Cemetery. At some point in time a military headstone was added to his gravesite.

Less than a month after her husband's passing Mary petitioned the U.S. Government to continue receiving at least a portion of Charles' pension. The petition – filed in the State of Washington - was granted, but again, without accessing pension files details are not available.

On a final note, Mary H. Pelton Bixby’s date of death and her final resting place are unknowns.