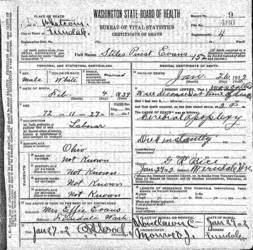 The battalion was then (10/22/1964) used to find an alternate river crossing during the Battle of Big Blue River. That same month it was engaged at the battles of Westport (10/23/1864), Marmaton River (10/25/1864), and Second Newtonia (10/28/1864). It was then briefly furloughed in Arkansas before rejoining Price's forces in Texas that December. Circa 2/1865 the battalion received new recruits and reached official - ten company - regimental strength.

Slayback's Cavalry fought its last battle in 5/1865. On 6/2/1865 The Confederate Trans-Mississippi Department surrendered. The men were stationed at different points in Louisiana and Arkansas when they were paroled twelve days later.  This leads historian James McGhee to surmise that the unit was disbanded prior to the surrender.

Stiles Priest Evans was born 2/4/1839. His place of birth was within the state of Ohio.

The only available information pertaining to Stiles' parentage is that his father was purportedly born in New York and his mother, Kentucky.  No information has been located regarding possible siblings.

The first U.S. Census information found for Stiles is from 1860. At that time he was a laborer on the farm of one James T. Sulling and family located in Bear Creek Montgomery County, MO.

During the American Civil War (ACW) Stiles served as a private for a short period of time in Slaybacks Missouri Cavalry Regiment. No additional information is known about his military tenure.

Post-war all we know about Stiles is that in 1892 he was residing in Tulare, CA. He likely married that same year.

Stiles' bride was Effie Stele Shortridge. According to Effie, she was born in Missouri on 5/26/1868.

It appears that immediately, if not almost immediately after being wed Stiles and Effie moved to Washington State. Settling in the community of Ferndale located near the U.S. / Canada border in Whatcom County, Stiles made a living doing odd jobs and performing laborer tasks. It was there he and Effie began their family.

On 12/26/1912 Stile P. "Old Man" Evans died instantly while walking on the street in Ferndale. Cause of his sudden passing was cerebral (stroke) apoplexy He was seventy two years, eleven months and eleven days old. Burial was/is in Ferndale's Woodlawn Cemetery.

Following her husband's passing Effie remained in Whatcom County. In 1920 she still had two of her children in her Ferndale home. By 1930 she was residing in the nearby community of Blaine with grown son Albert and his family.

Effie Stele Shortridge Evans died on 12/18/1936. The location of her passing was Whatcom County's City of Bellingham. She was/is buried in the Woodlawn Cemetery with Stiles.