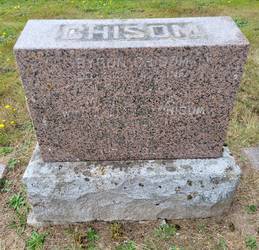 The beginning of this memorial is based on information in a CD we got from the Whatcom Genealogical Society called "Civil War veterans of Whatcom County".

Byron Chisom, aged 70 years, passed away at a local hospital at a late hour Saturday, October 18, after being in poor health for a number of years. Mr. Chisom has been a resident of Bellingham for the past three years, coming here from Prattsburg, N. Y. He was a member of J. B. Steedman Post, No. 24, Grand Army of the Republic, at Bellingham. The funeral service will be held Tuesday, October 21, at 2:15 p. m. from the funeral parlors of Undertaker Harry O. Bingham, 1319 Dock Street, with Rev. James M. Wilson officiating. Interment will be made in Bay View cemetery, according to the ritualistic burial service of the Grand Army of the Republic. The funeral car will leave from the corner of G and Girard streets at 1:05 o'clock p. m. for the convenience of the family and friends.
(From The Bellingham Herald, October 20, 1913)