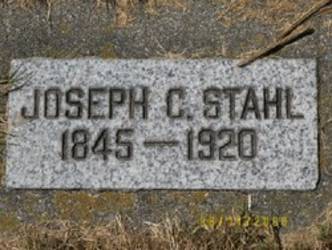 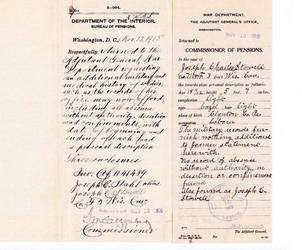 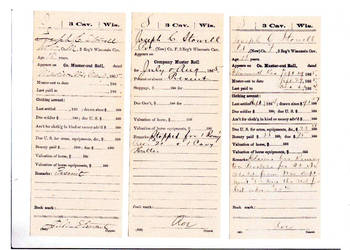 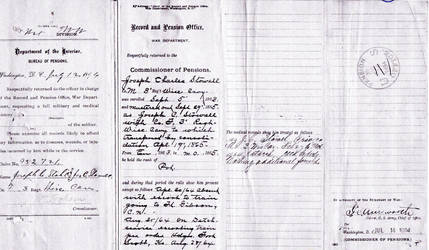 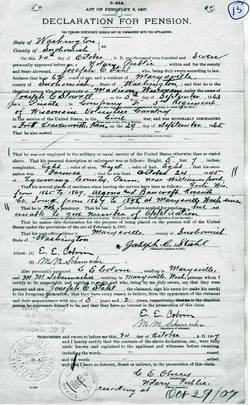 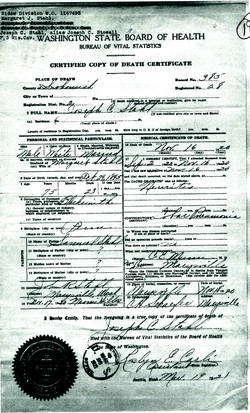 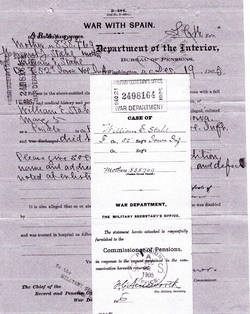 *NOTE: Trooper Stowell's true surname was Stahl. Why young Joseph enlisted under an alias is not documented. Likely, however, it was because he was not of legal age.

The 3rd Wisconsin, a three year "western theater" regiment had the distinction of being one of a relative few units that never served together or saw action as an entity throughout its span of existence. In this vein, its history reads more like that of an artillery regiment than a cavalry unit.

The regiment left the state on 3/26/62 enroute for St. Louis, MO.  In route twelve men were killed and twenty eight injured in a railway accident near Chicago, IL.

The accident aside, on 5/22 it was sent to Ft. Leavenworth, KS and the regiment's colonel appointed as provost martial-general (chief of military police) of the state. Following this appointment companies and segments of the 3rd were assigned throughout Kansas and Missouri to protect loyalists, disburse bushwhackers and roving bands of guerillas, guard Federal wagon and railroad trains, garrisoning forts, providing scouting and other services.

Along the way, elements of the regiment also found time to engage not only Confederate forces, but hostile Indians. Actions involving the former included Cane Hill, AR 11/28/1862, Prairie Grove AR on 12/7/1862 and Honey Springs, OK on 7/17/1863. Other confrontations involved both Rebels and the hostiles.

In January, 1864 three quarters of the regiment reenlisted and, after a furlough, were sent to Benton Barracks, St. Louis, MO.  From there, in July, it went to Devall's Bluff, AR where it engaged in picket and scouting duty in the vicinities of Huntersville and Little Rock until late August. After that, a detachment, along with other mounted troops, routed a body of 1200 enemy cavalry while another 145 men took part in an expedition to Ft. Smith, AR. As the year wound to a close remaining companies were stationed at various points within Missouri, except for Co. "M" which was sent to Pawnee, KS.

In early September, 1863 the teenaged Joseph enlisted in the U.S. cavalry.  At enrollment his vital statistics were as follows: Height - 5'7"; Eyes - Hazel; Hair - light; Complexion - light; Occupation - farm laborer. For enlisting he received a $100 bonus or "bounty", $25 of which was paid up front.

Available service records report Joseph as always present for duty except for a period between 2/27 and 3/11/64 when he was hospitalized at Humboldt, KS for catarrh (likely a respiratory infection) and when on detached duty escorting wagon trains. His only inter-regimental company transfer occurred on April 19, 1865 during "downsizing" which consolidated existing companies and regiments as the War ground to a close.

There is some documentation indicating that while in the military Joseph apparently provided his own horse and some equipment for which he was paid. On the other hand, he tended to lose government equipment, the financial cost of which he had to reimburse the country at time of discharge. Following that discharge he settled in Lodi, WI, very possibly with his parents.

On May 3rd or 13th, 1868, in Algona, Kossuth County, IA Joseph married to Margaret J. Galliou (b.ca. 1868 Canada). The young couple initially settled in Algona where the 1870 U.S. Census found Joseph employed as a blacksmith.

In 1898 War - focusing on Cuba - broke out between the U.S. and Spain. The Stahl's 25 year old son, William, like his father before him, answered his country's call to arms and joined the U.S. Army as a wagoner.  He had lived with his parents until only about four months prior to his 5/6/98 enlistment, but would never return home. On August 9, 1898 while in camp George located in Thomas, GA young Stahl succumbed to spinal meningitis.    It appears that shortly thereafter Joseph left the family home to go north in pursuit of the gold bug, thereby leaving son Samuel to make arrangements for recovering his brother's remains. Joseph would later petition the U.S. Government to collect arrears in pay from the date of William's enlistment to muster-in, extra pay, clothing pay and pay up to his date of death.  The claim was allowed.

In 1903 Joseph returned from Alaska/The Yukon and promptly moved his family from Iowa to Washington State where they settled in the western Washington Snohomish County community of Marysville.  Why the move to Washington? The answer is not known.

1904. Joseph, then at 59 years of age appears to have undergone a medical evaluation to determine if he was eligible to collect a U.S. Government disability pension based on ailments which traced back to his days of Civil War soldiering which included rheumatism, varicose veins of his left leg as well as other aches and pains which rendered him unable to make a living by performing manual labor.  The application process continued into 1906 when another Civil War vet, William Barge testified that Joseph's only assists were one unimproved lot in Marysville ($50), one horse ($50), one cow ($30) and one set of blacksmith tools ($50).   A pension of $20 per month was ultimately granted in 1915. In 1918 that stipend was increased to $40 per month.

Joseph Stahl lived out his final years in Marysville.  He died there on 11/16/20.  Cause of death was listed as neuritis, an inflammatory disease of the nerves with lobar pneumonia contributing.  Burial was in the Marysville Community Cemetery. The old soldier's age at passing was 75 yrs. and 23 days.

Following her husband's death Margaret remained in Marysville.  While living she was able to collect a $30 per month stipend based on her late husband's Civil War pension.  She died on July 19, 1927 and was buried beside Joseph.