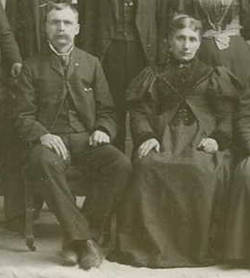 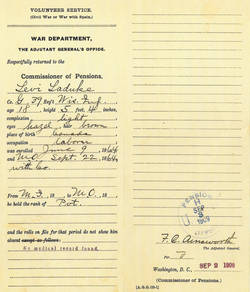 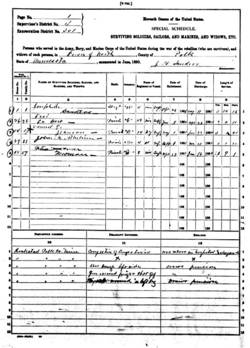 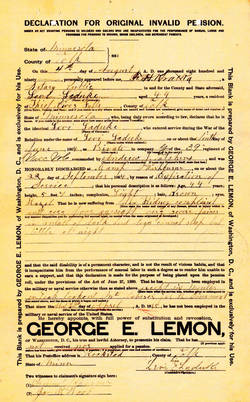 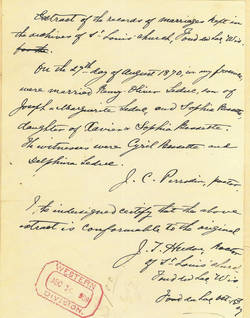 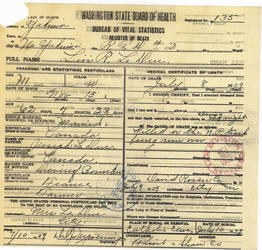 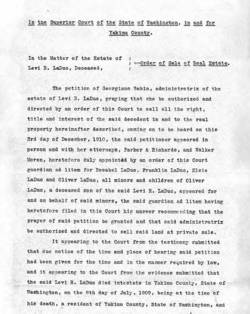 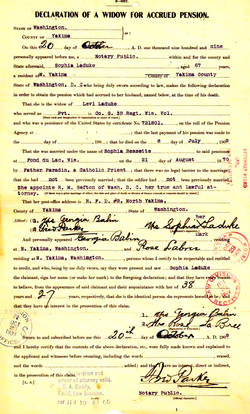 During the early months of 1864 Union General U.S. Grant planned and implemented his Overland Campaign which, a year later would bring end to four years of bloody American civil war.  In order to place as many “experienced" troops as possible in the field he pulled units from many rear echelon positions. To regarrison forts and fieldworks, many short term one year or hundred day regiments were created. The 39th was a 100 day unit from Wisconsin.

The 39th left the state on 6/13/64 and travelled to Memphis, TN which it reached on the 17th. Once at that location company "A" was detached for train guard duty. The rest of the regiment was engaged, by detachments, in other guard and picket duties. During its brief period of service the regiment did have a brush with 5000 of Confed. Gen. Nathan Bedford Forrest's cavalry during which the Rebels broke through the Union picket lines and entered Memphis.

ED. NOTE: This American Civil War veteran's surname at birth was Le Duc or LeDuc. Throughout the man's life it also appeared as La Duke and Laduke. His civilian headstone located in Calvary Cemetery, Yakima, Yakima County, WA reads LeDuc, but as all military and pension documents feature Laduke, it is that spelling we are using herein.

Looking at the birth locations of the LeDuc children it would appear the family had permanently moved to America by1850. In the U.S. their first state of residence was Illinois.

Regardless of when the family arrived stateside and where they initially settled, by 1855 the LeDucs were residing in or near the community of Edward located in Washington County, New York. Five years later, 1860, they had quitted that state and were living in Oconto West Ward in Oconto County, Wisconsin.

In 1861 civil war swept over America.  Three years into that conflict Levi enlisted in the U.S. Army infantry. His unit of service was Company "G" of the 39th Wisconsin Infantry. According to family lore, the enlistment was likely as a replacement for some wealthy man’s son who was drafted, but didn't want to serve.  Levi was paid $1000 to be the man’s “100 Day" substitute.

At enlistment we get our first physical look at Levi the physical man. According to military files, Private Laduke was 5'4” tall; light complexioned with brown hair and blue eyes. For occupation he noted "laborer”.

Here it deserves to be noted that while in the military, according to his comrades, Private Laduke was called by a number of different names. To some he was Remy Oliver Laduke or Le Duc. To others he was Levi R. Laduke, Levi R. Le Duc or Levi Laduke. To make matters more confusing some called him Levi. Others called him Remy or Rem, while some knew him as Oliver.

His 100 days having been served Private Laduke settled accounts with the U.S. Government - he owed $32.57 cents for clothing advanced and another 57 cents for equipage (canteen, haversack, etc.). - and collected his back pay.  An interesting footnote to the ending of his period of service is that on his company muster out roll there is a one word notation "sick." Unfortunately there are no medical records to describe the nature of Private Laduke's illness or its duration.

As with many Civil War veterans, exactly where Levi settled after the war is not known.  We next sight him in 1870 and, interestingly, in two different places within Wisconsin. He is found in his father's Fond du Lac residence and by himself in Chippewa Falls Chippewa County by himself. Perhaps that year he had set out to live on his own thereby catching the eye of two different census takers on two separate occasions.

At some point during this move to Canada Sophie and her children were said to have lived on a starvation diet in order to prove ownership on a homestead land claim. During this time Levi was reportedly working for a railroad in The  States but not sending money northward, As a result, Sophie and her children were reduced to eating "corn mush"  three meals a day. According to family lore one of Sophie's brothers visiting the farm ended up buying family a cow in order to help improve their diet. Although it is not known for sure, this may have been the period when family members – available documents don't specify who those family members were - began to dislike Levi calling him "Son Of DeBondy." It may also be when his marriage began to deteriorate. More on this, later.

The Laduke's stay in Canada was not lengthy as by June of 1890 they had returned to the U.S. and were living in Crookston Township Polk County, Minnesota. Again, the when and why of the move is not documented. The family would remain in Crookston for about eight years.

Crookston was not to be a permanent settling for the Laduke family as by August the 4th of 1890 their household was noted as being the Polk County community of Thief River Falls. It was there Levi initiated the paper trail to obtain a U.S. Government disability pension based on physical  ailments which he traced back to his days of Civil War soldiering. In his case those problems included heart and kidney problems, pains in small of his back and legs plus insomnia. Interestingly when he signed the documents he made His X Mark. Based on these documents it would appear that Levi Laduke was illiterate.

On January 26, 1892 Levi was granted a $12 per month disability stipend. The grant was made retroactive to August, 1890. The basis for the pension was impaired vision and general debility.

1900. A new century, a new decade and a new census. That year's population tally found the Laduke family still in Crookston Polk Co. MN. Of the Laduke children, at that time only son Joseph was in the home with Levi and Sophie.

In 1906 Levi and Sophie moved from Duluth Polk Co., MN to Yakima, Yakima Co., WA. Again, what prompted this jump and exactly when it was made is not documented. Levi, now, did not have long to live.

On 7/8/09 Levi was killed by train. An article in the local newspaper regarding the incident read as follows:

The remains of Levi R. LeDuc, a civil war veteran was found on the Northern Pacific Tracks in the southern part of the city. Thursday morning by L.K. Williams of Sunnyside when he was looking for a package lost from No. 13 (or fifteen). The body was mangled almost beyond recognition it is believed that all of the Wednesday night and Thursday morning trains passed over the body. [S]uicide, murder and accident theories have been advanced in connection with the death. The most plausible being that Leduc came to his death while under the influence of liquor. Coroner (illegible) will hold an inquest over the remains.

Had Family Troubles
"Leduc was a civil war veteran and drew a pension from the government. July 4th he received his quarterly allowance of $24 and became intoxicated. Wednesday the old vet was served with papers instituted by his Wife in divorce proceedings. A restraining order was issued by Judge Preble commanding Le Duc to remain away from his wife's home. The order was found on the body of the man Thursday morning and it is evident he was on his way home when he met his death. Friends of the man assert that the knowledge of divorce proceedings and the probability that he would be homeless in the twilight of his life bore heavily on his mind and caused him in a fit of despondency to throw himself beneath the wheels of a passing train. The murder theory is (illeg) ted"

On 8/11/09 Sophie - residing at RFD 2 North Yakima - made Her X Mark in applying for at least a portion of her late husband's government pension. Such was granted as at her death she was receiving a $24 per month
tipend.

In 1916 Sophie sought a pension payment increase. At that time her address was Toppenish Yakima Co., WA.