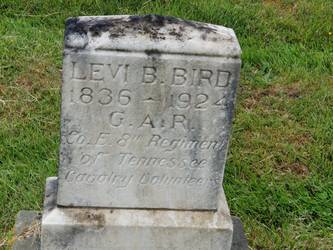 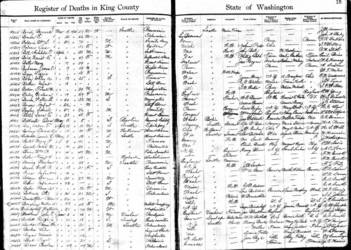 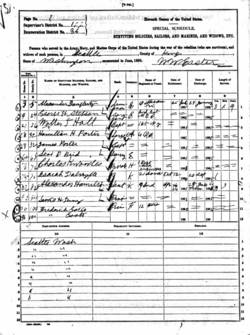 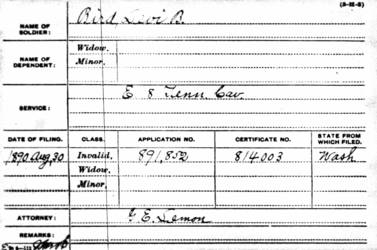 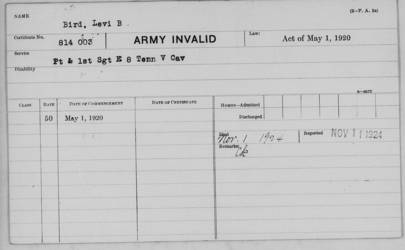 As a fraction of a regiment, the 10th had its origin in East Tennessee during September, 1863. It saw some action that fall before, in December, being moved to Camp Nelson in South Jessamine Co, KY to guard Rebel prisoners.

On 2/6/64 this "fraction" of the 10th was consolidated with another portion of a regiment known as the 8th East Tennessee Cavalry. The resulting three year, western theater organization was dubbed the 8th Tennessee Cavalry.

After its creation, the new 8th guarded railroads at Columbia, KY and Franklin, TN. In June, 1864 it was transferred to Gallatin, TN where it performed similar duties until that September.  It was then ordered back to East Tennessee where, during the remainder of the year, it was almost constantly engaged in marching and fighting.

On March 21, 1865 portions of the 8th joined Union Gen. Stoneman on his raid into Virginia, the Carolinas and Georgia. In June the entire command was reunited at Lenoir's Station in Lenoir City, TN. It was mustered into history at Knoxville, TN on 9/11/65.

*NOTE: The birth - to - death biographical profile which follows was created in July, 2020 during the Corvid 19 medical pandemic. It does not contain the depth of detail found in other biographies on this site because military, pension and other veteran-related documents housed in the National Archives located in Washington, D.C. were not available. These documents will be obtained on a later date and their contents included in the narrative.

Levi Brownlow Bird (The surname sometimes appears as Byrd) was born 2/16/36 in Tennessee. During the 1850 U.S. Census the family farm was located in District 3 of Hawkins County, TN.

As best as can be deduced from available census data William and Phoebe produced at least four children of which Levi was the youngest. His older siblings were Malinda (b. 1825 TN), Ephraim (b. 1830 TN) and Jackson (b. 1832 TN).

The union of Levi and Harriet produced eight children. Seven are identified.  Six were living as of 1900.

Where Levi and Harriet settled after their wedding is not known. In 1860, however, they were living in northeast Tennessee’s District 2 of Hawkins Co. Also in the home were Levi's parents William and Phoebe, his sister, Malinda, and an eighteen year old identified as Mary Wyatt.

In 1863 Levi went to war. His military records are needed to clarify the time frames of the units in which he served. First came the 10th East Tennessee Cavalry, then 8th TN Cavalry. As earlier noted, the 8th was created when 10th east was combined with 8th east. On 3/1/65 Levi was promoted to 1st sergeant in Company "E" of the 8th Tennessee.

The War over, whether the home Levi returned to was the Hawkins County residence or another is not known. By 1870, however, he and his family were residing and farming in District 9 of Grainger County, TN.

By the time the next census polling was done in 1880 the Bird family had quitted Tennessee for a farm located in Medicine Rooks County, Kansas. When and why the move was made is not known, but it may have been made with a stop in Iowa because it was in that state that son Clyde David was born in October, 1875. Grainger is a northeast Tennessee County adjacent to Hawkins County, TN.

As of 3/1/85 the Birds were still in Medicine, but by the time the June 1890 veterans schedule was tallied they had flown the Kansas coop and were residing in Seattle King County, Washington. What had drawn them to the Puget Sound region of the Pacific Northwest and when they had arrived here is not presently known. Occupations noted for Levi after coming to Seattle included "wood chopper" (1892) and "laborer" (1900).

Harriet died on 4/6/05 in Seattle.  Details pertaining to her passing are not available. Interestingly, she was not buried in Seattle, but northeast of there in the Bothell I.O.O.F. (Pioneer) Cemetery located in Bothell King County, Washington. Her eldest daughter Margaret Bird Crumly lived in the Bothell/Woodinville area at the time, and her husband Alfred Crumly served in the early 1900's as pastor of the Bothell and Woodinville Methodist churches.

By 1920 widower Levi Bird had his fireman son, Clyde, living with him. Where that 1920 residence was located is not denoted.

Levi died in Seattle on 11/1/24. At passing he was aged 88 years, 8 months and 16 days. The cause, which had come upon him a year earlier, was myocarditis (heart problems).

The location of his passing was noted as 1211 1/2 Main Street, Seattle. This was undoubtable the address for he and Clyde who notified city authorities of his father's death.

* In later years “Maggie” would become the second Mrs. Alfred Crumly. During the American Civil War Crumly served in Co. "H" 10th Iowa Infantry. The Crumlys moved to the Puget Sound region of the Pacific Northwest sometime prior to 1892. Both are buried in the Bothell I.O.O.F. (Pioneer) Cemetery located in Bothell King County, WA.