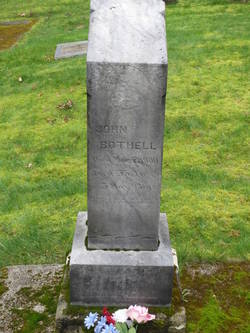 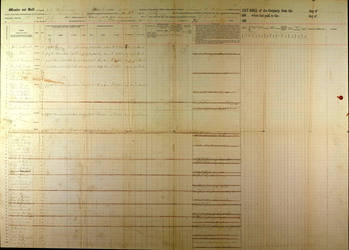 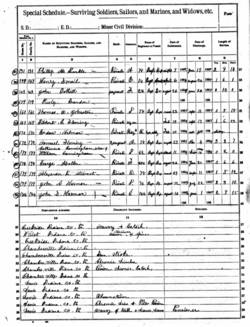 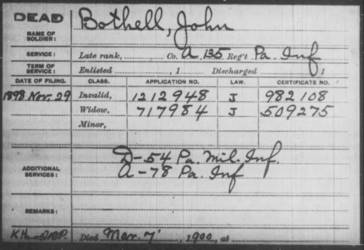 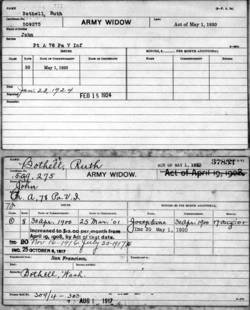 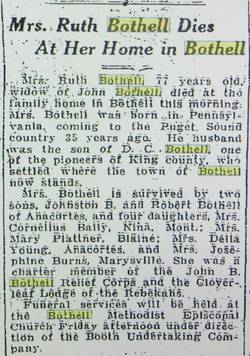 The 135th was a nine month, eastern theater infantry regiment. It was organized during the summer of 1862 with men from the counties of Lancaster, Indiana, Westmoreland and Jefferson.

Mustered into Federal service in mid-August, on the 19th the unit departed the state for Washington City. Once there it provided provost (military police) services for the region until 2/16/63. It then moved to Belle Plain, VA.

At Belle Plain it was assigned to guard and picket duty until the opening of the Chancellorsville Campaign. At that time it moved to Pollock's Mill Creek below Fredericksburg and supported the Union artillery batteries posted along the Rappahannock River. During this period it had 3 men wounded.

Shortly thereafter, during the battle of Chancellorsville (4/30 - 5/6/63) it was posted to cover the front of the 1st Brigade, but was not actively engaged in the fighting.

Upon the expiration of its term of service the 135th returned to Harrisburg for final muster.

In June, 1863 word spread through Maryland and Pennsylvania that Rebel forces under the command of Gen. Robt. E. Lee were marching northward to cross the Potomac River. Volunteers were called for by Pennsylvania Gov. Curtin to serve "During the pleasure of the president or the continuance of the war."

Slow to believe that their homes were really endangered the greatly reduced number of northern men eligible for military service hesitated to respond. Still, eight "emergency" regiments were raised to meet the gray threat.

Once it was discovered that the bulk of the Confederate army had crossed the Potomac, on 6/26 Gov. Curtin issued another proclamation calling for 60,000 men to be mustered into state service for a term of 90 days, but to be discharged as soon as the "crisis" had ended. From this call came the 54th Pennsylvania Militia Infantry Regiment.

The battle of Gettysburg, PA was fought July 1st – 3rd, 1863. The defeated Confederates then began falling back toward the Potomac and Virginia.

During the Rebel retreat a portion of these militia troops joined the Army of The Potomac in Maryland. Most, however, were soon returned to the state capital. The militia regiments were disbanded soon after the "emergency" regiments.

No Loss numbers are available.

The 78th, a three year western theater regiment was recruited during the late summer and fall of 1861. On 10/18/61 it departed the state for Louisville, KY. In December its brigade moved to Munfordville, KY.

As 1862 neared its end the regiment was ordered into the defenses of Nashville, TN. Often attacked, it was engaged at LaVerne, Neely's Bend, White Creek, Charlottesville and Franklin Pike. It completed its combat year at the bloody battle of Stone's River/Murfreesboro, TN (12/31/62 - 1/2/63). There it lost 190 killed and wounded.

September 18 - 20 found the regiment engaged at Chickamauga, GA. It then retired with the retreating Union forces to Chattanooga, TN. It fought bravely during the Federal breakout from that besieged city.

Until May, 1864 the 78th remained at Chattanooga. It then joined Union Gen. W.T. Sherman's campaign to capture Atlanta, GA. During those maneuvers it saw hard fighting at Tunnel Hill, Buzzard Roost Gap, Resaca, Dallas, New Hope Church and Kennesaw Mountain. It was then ordered to Chattanooga to guard wagon trains.

In October, 1864, its term of service having expired, all original members except re-enlisted veterans and recruits returned to Pennsylvania for final muster.

During this period veterans and recruits remained at Nashville, TN. In March, 1865 eight new companies brought the 78th back to minimal strength. The regiment, thus organized, received final muster on 9/11/65 in Nashville.

NOTE: The birth - to - death biographical profile which follows was created in July, 2020 during the Covid 19 medical pandemic. As a result of the National Archives in Washington, D.C. being closed, it does not contain the depth of detail found in most other biographies on this site. When the Archives re-open veteran-related military, pension and other files will be obtained and the data therein added to the narrative.

Although at least one source purports he was born 9/30/45, a preponderance of evidence points to John Bothell having been born 9/28/44. The place of his birth was Somerset Co., Pennsylvania.

Most all we know about John's young life comes from his periods of military service. During the American Civil War he served in three Pennsylvania infantry regiments before he turned 21 years of age. Unfortunately, until his military service records can be accessed all we can say about his three enlistments is that he survived all of them.

After The War John vanished census-wise until 1880. The growth of his family, however, gives us a glimpse into those missing years.

Looking at the birth states of the Bothell children, all except perhaps, Josephine were born in Clayton Co., IA. The only post-war census finding John was for Morona Clayton Co., IA in 1880. It appears, that once the Bothells put down farming roots in that community in the late 1860s they were there for the long haul.

By 5/20/89 the Bothells had quitted Iowa and moved to King County located in Washington Territory. What had drawn them to the Puget Sound area of the Pacific Northwest and when they had arrived here is not known. Likely, though, it was other Bothell family members (parents and brothers) moving to the area and the booming timber industry. A 1889 census for Houghton, WT - Houghton was a small community east of Lake Washington across from Seattle. Today it is a part of the city of Kirkland - listed John's occupation as "logger."

By 1892 John had moved his family northward beyond the tip of Lake Washington to the young King County community of Bothell. The town was named after his father's and his own family surname. In Bothell John was the manager of the local saw mill.

John died in Bothell on 3/7/00 (The U.S. Census for that year miss-identified the community as Sammamish).  He was interred in the new Bothell I.O.O.F. (Pioneer) Cemetery.

Widowed, Ruth remained in Bothell for the remainder of her years. She died there on 1/23/24 and was/is buried beside John.

* During the American Civil War David served in the 54th Pennsylvania and the 14th Pennsylvania Cavalry.  He survived The War and was/is buried in the Bothell I.O.O.F (Pioneer) Cemetery located in Bothell King Co., WA.

***George served with John in Co. "A" of the 135th.. He survived the enlistment and The War. He was/is buried in the Bothell I.O.O.F. Cemetery located in Bothell King Co., WA