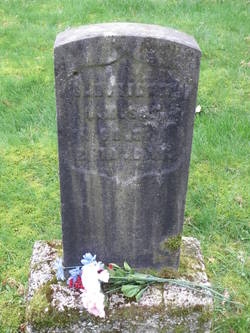 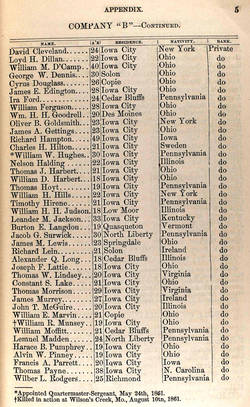 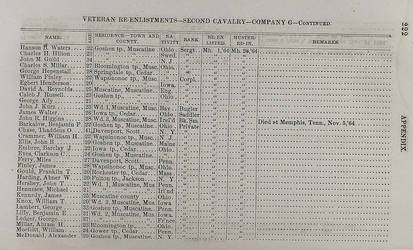 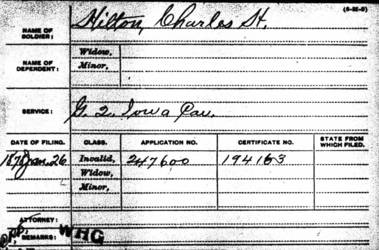 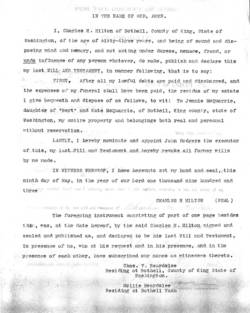 The 1st, a three month western theater regiment, left the state of Iowa 6/13/61 moving to Hannibal, MO. From there it moved to Booneville via Renick and Macon.

On 7/3/61 the unit marched to Camp Siegel near Springfield. From there it trekked another twelve miles to Camp McClellan.

Six companies then formed a detachment which marched to Forsyth and dispersed a band of the enemy. During this movement 50 prisoners were captured.

On 8/2/61 the 1st helped defeat Rebel forces at Dug Spring. At WILSON’S CREEK/Oak Hills (8/10/61) the outnumbered regiment' repeatedly repulsed determined attacks by Rebel forces and aided in the rout of the Confederates. Although not a victory for the Federals, the opposing forces - five times their number - were in no condition to pursue the retreating bluecoats. During this, one of the first major engagements of the War, the 1st’s losses were 12 killed or mortally wounded, 132 WOUNDED and 2 missing.

The morning after this great battle the 1st moved to Rolla where it boarded a train for home. En-route, near Louisville, it was mustered out of Federal service.

*NOTE: Although a short - term regiment, the 1st is one of few units which lost more men in combat than by disease, etc.

The 2nd, a three year western theater regiment was organized during the summer of 1861 in Davenport, IA. It was mustered into Federal service on either 8/1 or 8/25/61.

March, 1862 found the 2nd aiding Union forces in the defeat of Rebels at Mew Madrid and Island No. 10, Mississippi. By 5/1/62 it was participating in the siege of Corinth. On the 9th it made the famous charge at Farmington during which 100 men were unhorsed and half that many killed or wounded. Later that same month it was part of the Union dash around Corinth destroying the railroad and supplies in the Confederate rear while capturing many prisoners.

In September the 2nd was back to hard riding and skirmishing. The regiment stood to horse all night during the battle of Iuka (9/19/62). Soon came the (10/3 - 4/62) battle of Corinth. In November and December the regiment took a constant and important part in Union Gen. U.S. Grant's movements through central Mississippi towards Vicksburg. At Coffeesville it lost 22 men killed and wounded. It then followed Grant's army as a rear guard as it retreated toward Memphis, TN. Winter quarters at LaGrange followed.

During the early spring of 1863 the 2nd was riding in small expeditions throughout northern Mississippi. Then came the Grierson Raid said by Grant to be "One of the most brilliant cavalry exploits of the war." The regiment completed the year at Memphis, TN.

After re-enlistment furloughs, the summer of 1864 found the 2nd primarily raiding and scouting throughout Mississippi. By mid-November, it was involved in the hardest campaign of its history - resisting Confed Gen. Hood's invasion of Tennessee. Falling back to Franklin with other Union forces, there on 11/30/64 it played an important part in the battle for that place. The unit completed the year with the (12/15 - 16/64) battle of Nashville during which Rebel forces were driven back in dismay and disarray. This was the regiment's last campaign.

The spring and summer of 1865 were passed with the 2nd performing unimportant duties in Mississippi. Final muster came in October.

NOTE: The birth - to - death biographical profile which follows was created in July, 2020 during the Covid 19 medical pandemic. As a result, it contains far fewer details than many of the life snapshots found on this website. It does not draw upon veteran-related military, pension and other files housed within the National Archives in Washington, D.C. On some later date, when the Archives are again open, those files will be obtained and the information contained therein added to the narrative.

Little is known about the early life of Charles H. Hilton. Reportedly he was born in Sweden circa 1838..No additional – more specific - birth information has been found in available documents.

No names are available pertaining to his parents or possible siblings. Also not known is when he emigrated to America.

As per the U.S. Census of 1860, as of that year Charles - then around 22 years of age - was residing in Union Johnson Co., Iowa. There he was a laborer on the farm of William B. Dunton and family.

On 4/18/61, mere days following the (4/12 -14) Confederate bombardment of Ft. Sumter located in the Harbor of Charleston, SC; Charles enlisted in the U.S. Army. His unit was the three month 1st Iowa Infantry.

During its short period of existence the 1st would participate in a significant number of combat actions including the 8/10/61 battle of WILSON’S CREEK, MO. During that fight Private Hilton received a wound to his left thigh. No additional details of the wounding are available. Shortly thereafter Private Hilton and the 1st were mustered out of the service.

Less than one month after leaving the military, Hilton re-enlisted. On this occasion he entered the ranks of the 2nd Iowa Cavalry as a corporal. While in the 2nd he would rise in rank to 4th sergeant, then 3rd sergeant and, finally, quartermaster sergeant.

As with his first stint in the military, Corporal/Sergeant Hilton's second did not prove to be easy. On 5/2/30 he was severely wound and taken prisoner at Boonville, MS. Again, without access to his military service and medical files no additional details can be given pertaining to the wounding and capture. Charles did, however, survive to be mustered out of the military a second time in September, 1865.

It is not known if Charles and Mary produced any children. No additional census data has been found pertaining to the couple. Further, Mary's fate is not known.

Sometime and somehow Charles ended up in Bothell King Co., WA. All we know about him here comes from the Seattle Daily Times of December 26, 1906 and the Seattle Star of December 27, 1906.*

C.W. Hilton [sic], about 70 years old was found dead last night sitting in a chair at his home in Bothell. Mr. Hilton had eaten a hearty Christmas dinner and then went home, where he lived alone. About 10 o'clock when a neighbor called to see him, he was found dead. He was a member of the G.A.R.

A second report regarding the death of C.H. Hilton of Bothell, received last night by Coroner Carroll, was the cause of Deputy Coroner Wiltise going there this morning to investigate the circumstances surrounding the aged soldier's demise. Hilton was found dead in a chair in his house yesterday morning and everything seemed to point to a natural death. Accordingly Coroner Carroll declared that an inquest would not be necessary and that Hilton could be buried under the Auspices of the G.A.R. Last night, however, Dr. Carroll was notified that one of Hilton's eyes had been found blackened and that there were several bruises on his head. This calls for an investigation.