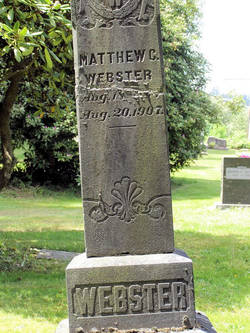 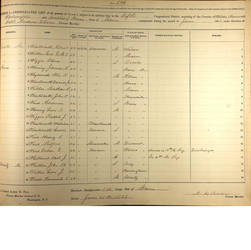 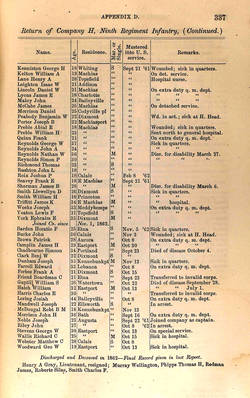 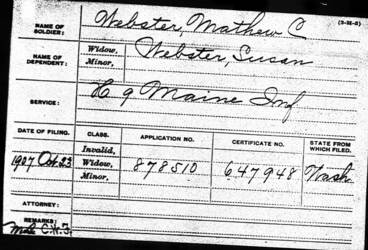 The 9th, a three year regiment which was to serve throughout the duration of The War, saw campaigning in both the western and eastern theaters. Also, it is one of the few organizations that actually lost more men in combat than it did to disease, etc.

Raised from within the state of Maine "at large" during September, 1861, within two weeks of the arrival of first recruits in Augusta, the unit was on its way to Washington City. Arriving at that place on 9/26/61, the 9th was soon after assigned to Union Gen. W.T. Sherman's expedition to capture Port Royal, SC. It landed at Hilton Head, SC on 11/8/61.

On 2/7/62 the regiment moved to Warsaw Island off the coast of Georgia. From there it joined the expedition which captured Fernandina, FL. The unit was to remain there throughout the remainder of 1862.

In January, 1863 the 9th returned to Hilton Head, SC. From there it moved to Helena Island in preparation for a Union assault on Morris Island located in Charleston Harbor. After capturing enemy rifle pits the regiment took part in attacks on Fort/Battery Wagner (7/10 - 9/7). Casualties from the numerous attacks were 300 killed, wounded and missing.

Spring of 1864 saw the 9th transferred northward to The Army Of The Potomac. In May it sailed up the James River to Bermuda Hundred, VA. For the remainder of 1864 it saw much hard service during the Overland Campaign and actions around Petersburg.

Following the capture of Ft. Fisher, NC in January, 1865 the 9th was ordered to that location. Later, it took possession of Wilmington. It then joined Union Gen. Sherman's forces at Cox's Bridge after which it proceeded to Magnolia and then to Raleigh. It remained in Raleigh until mustered out of Federal service.

NOTE:  The birth-to-death biographical profile which follows was created in July, 2020 during the Covid 19 medical pandemic. It contains fewer details than other biographies found within this website because veteran-related military service, pension and other files housed within the National Archives in Washington, D.C. were not available. These files will be obtained later and their information added to the narrative.

Several birth years exist for Matthew Creekman Webster. However, he was likely born on 8/18/38.

Although U.S. Census tallies note several birth locations, Matthew likely came into this world in Nova Scotia, Canada. Herein we are adopting that locale primarily because both of his parents were Nova Scotians.

Father of Matthew was Daniel Webster (b. 10/13/88 Kings County Nova Scotia Canada - d. unk.). His mother was Sarah A. (nee Godfrey b. 2/20/01 Colchester Co., Nova Scotia, Canada - d. 7/19/89 Norwood, MA U.S.A.) Webster. Daniel's occupation is not identified. Also not documented whether or not Daniel and Sarah produced children other than Matthew.

Accepting that Matthew was born in Canada, when he arrived in the U.S. is not known. The first we learn about him in America comes from his 10/19/62 enlistment in the U.S. Army. His unit of enrollment was 9th Maine Infantry Company "H". Without access to his military service file all we can say about his period of service is that he survived the experiential ordeal!!

Matthew's bride was Susan Mildred Burton (b. 4/7/49 KY). Where, how and when the two had met is not known. It appears that after wedding the couple set up household in Kingston Meeker Co., MN.

Even though all of the Webster's five children were birthed in Minnesota, in between births the family moved both within and outside of that state.

In 1870 the Webster’s were in Kingston Meeker Co., MN. Five years later, on 5/1/75 they were in Franklin Wright Co., MN. Another five years found them residing in or near the community of Monticello in Sherburne Co.  Although it is not always documented, it appears that throughout these years Matthew's occupation was blacksmithing.

By 5/1/89 the Websters had quitted the east coast and mid-west in favor of King County, WT. What had drawn them to the Puget Sound region of the Pacific Northwest and when they had arrived here is not documented.

The first residential community noted for Matthew and family in King Co., was Houghton. Houghton, today, is part of the community of Kirkland located easterly across Lake Washington from Seattle.

At the dawn of the twentieth century the Websters, were still in King County, but by that year had moved northward from Houghton to the community of Bothell located north of Lake Washington along the shores of the Sammamish River.  Again, Matthew's occupation was blacksmithing.

Matthew C. Webster died on 8/20/07 in Bothell King County, Washington.  Cause of death was Malignant Endocarditis (heart disease). At passing he was 73 years and 2 days of age. Burial was/is in the Bothell I.O.O.F. (Pioneer) Cemetery.

Although we do not know if - at his passing - Matthew was receiving a U.S. Government disability pension based on his years of Civil War soldiering, we do know that on 10/23/07 Susan applied for a widow's stipend. Even though the dollar amount is not currently available, the request was granted.

In 1910 the widow Webster was residing in Seattle King Co., WA. At that time she had a young couple boarding in her home. A decade later, in 1920, she was still in Seattle, but by then residing in home of married daughter Mary and her husband.

Susan Mildred Webster died on 11/26/20. Her place of death was in Abbotsford British Columbia, Canada. Her final resting place is in Bothell beside Matthew.