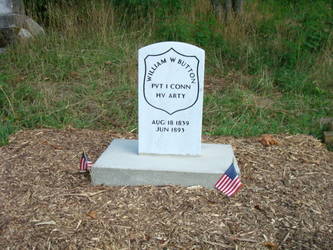 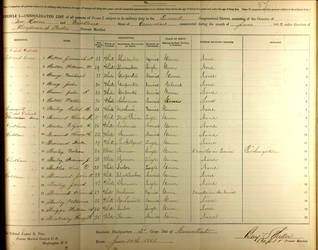 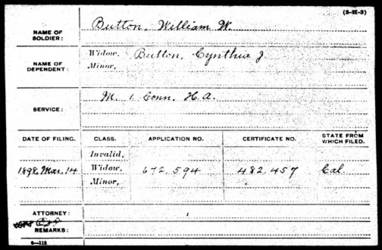 Recruited from the state "at large", the 1st was a heavy artillery regiment that saw service in both eastern and western theaters during the American Civil War. Initially organized as the three month 4th Connecticut Infantry, the unit was reorganized into a three year infantry regiment.

Departing the state on 6/10/61 the regiment first moved to Chambersburg, PA then on to Washington, D.C. which is reached in October. During this period state gray uniforms were replaced by U.S. Army blues.

The regiment camped for the winter near Washington City where it helped finish construction on and garrisoned forts Richardson, Scott and Barnard. On January 2, 1862 the regimental identity was changed from the 4th infantry to the 1st heavy artillery.

On April 3, 1862 the 1st moved into Virginia as part of Union Gen. George McClellan's Peninsula Campaign. There, it joined the siege train which moved to Yorktown. When all was ready for firing to begin Rebel forces evacuated the town.

Leaving the siege cannon in charge of companies "L" and "M", the other ten companies of the 1st reported to White House Landing. Thereafter, during the peninsular actions, they served as infantry under Union Gen. Fitz-John Porter. Detachments of the 1st were also ordered to assist regular batteries thereby participating in actions at Malvern Hill (7/1) and at Harrison's Landing. The Peninsula Campaign ended, all companies and detachments returned to the heavy artillery regiment.

In August, 1862 the 1st embarked for Alexandria, VA. There, it was distributed into the defenses of that city and Washington, D.C. Their assignments spread from Ft. Scott to Ft. Ward inclusive. Except for companies "B" and "M" which were detached to Fredericksburg in December, 1862 to campaign with the Army of The Potomac during 1863 as an experiment on the use of heavy guns in a marching army, the bulk of the 1st remained in Alexandria throughout 1863. The regiment was, again, united, in April, 1864.

United, once again the 1st turned its attentions to temporarily performing as infantry under Union Gen. Benjamin Butler on Virginia's Bermuda Hundred. In mid- May the unit once more turned its eyes on artillery when it was placed charge of siege guns in that region outside of Petersburg. Firing began in earnest in late June.

During this period a large siege train was organized at Broadway Landing on the Potomac River. The guns of this entity were moved by four light artillery horse teams from the 1st’s company "M".

The 1st took a prominent role in Union actions before Petersburg, VA. It not only participated in the siege of that city but the bombardment of that place. Tons of munitions were rained upon the enemy's Petersburg works.

January, 1865 saw elements of the 1st move to Ft. Fisher outside Wilmington,  NC. A special detail composed of men from several companies including "M" joined in the assault upon the Rebel fortification and, when it was breached, turned captured field pieces upon the fleeing Rebels. Before daylight on 4/3/65 the enemy evacuated his lines. For the 1st Connecticut Heavy Artillery the shooting war had ended.

On 7/13/65 the 1st was transferred to Washington City. There it was engaged in experimental firing of 15-inch guns until all chance of trouble with the French army in Mexico was ended. The regiment was mustered out of Federal service and finally discharged on 10/1/65.

William W. Button was born 8/18/39. His place of birth was likely East Windsor Hartford County, CT as that was where the Button family was residing at the time of the 1840 U.S. Census tally.

Beyond his birth, the first we learn about William W. - from here on William - Button stems from his 1864 enlistment in the U.S. Army. But, without access to his military service records we know little about that enlistment tenure.  He did survive The War, but was said to have deserted his regiment after the shooting had stopped.

As with many American Civil War veterans, exactly where William resided and how he was employed after exiting the army are unknowns. By 1870, however, he was living in Pewaukee Waukesha County, WI working as a day laborer.

On 5/5/72 in Waukesha County, WI William married. His bride was Cynthia J. Brown (b. May 1940 or '41 PA). During their years together William and Cynthia produced no children.

By 1880 William and Cynthia were residing in Shenandoah Page County, IA. There, William was engaged in his father's trade of shoemaking.

May 20, 1889. By this date shoemaker William and "C.J." had moved westward to the Puget Sound region of Washington Territory. What had drawn them to this area of the Pacific Northwest and when they had arrived here are not known. Their community of residence was Kent located south of Seattle in King County.

Unfortunately, William, like his older siblings, did not live to a ripe old age. He died in Kent King County, WA in June, 1893. He was just shy of his fifty fourth birthday. . Burial was/is in the Saar Cemetery located in Kent, WA.

At some point following William's passing Cynthia removed from Washington to California. It appears that there, in 1898, she may have been granted a U.S. Government disability pension stipend based on her late husband's days of Civil War soldiering. With Private Button having deserted, however, how this would have happened is not known. Was the desertion a clerical error? Was there political intervention on his/her behalf? Perhaps archival documents will shed light on this mystery.

In 1900 Cynthia was residing in San Jose Santa Clara County, CA. She was a resident/inmate in a Woman’s Relief Port Home facility. She died there on 12/15/10 and was/is buried  in San Jose.