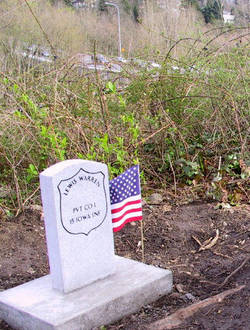 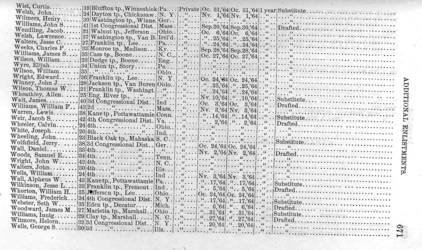 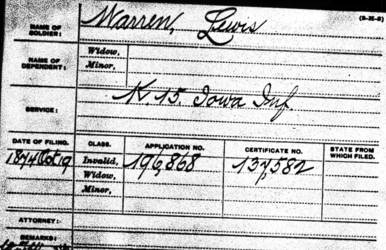 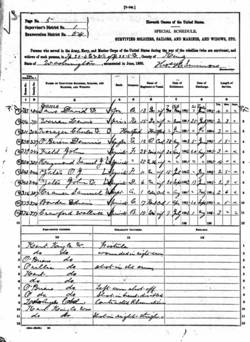 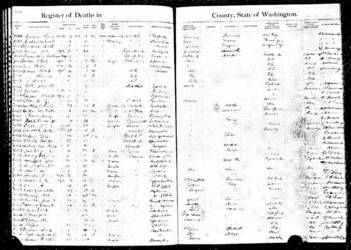 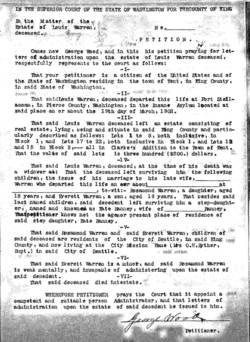 The 15th was a three year western theater infantry regiment. It was mustered into Federal service by companies through the end of February, 1862.It left the state in early March and almost immediately moved to Pittsburg Landing/Shiloh, TN arriving there shortly after the 4/6 - 7 battle commenced. Ordered to the front, it had to fall back which it did with some confusion. The green regiment fought bravely, but lost 188 killed, wounded and missing.

After Shiloh the 15th moved upon Corinth, MS where it performed railroad picket and guard duties into the month of July. In August it marched to Bolivar then participated in the battle of Chewalla. After pursuing the fleeing enemy, by mid-October the unit was back in CORINTH.. There, it again saw action with Rebel forces.

In the early months of 1863 the regiment joined Union Gen. Grant's campaign to capture Vicksburg, MS. After the fall of that city (7/4/63) it participated in the expedition to Monroe, LA. This movement has been called the most wearisome, ill- starred affair of its kind known in the annals of the American Civil War.

During the winter of 1863/'64 the 15th rested at Vicksburg. The early months of that latter year saw the regiment reenlisted as a veteran organization. Returning to the field in April, 1864 the unit garrisoned Mound City, MO.

During the campaign to capture Atlanta, GA the 15th took part in nearly every engagement from Kennesaw Mountain (6/27/64) to the battle before Atlanta (7/22/64). In the latter action it lost nearly 100 killed, wounded and missing.

In early 1865 the 15th marched northward through the Carolinas. There, it engaged the enemy at Goldsboro (12/17/65) and Bentonville, NC (3/19 - 21/65). The regiment then marched to Washington City and on to Louisville, KY.  There, it was mustered into history.

The 13th Iowa was a three year western theater infantry regiment. Following Federal muster it departed the state for Benton Barracks, MO. The unit spent the winter of 1861/'62 at Jefferson City, MO.

In early 1863 the 13th helped repair the roads Union Gen. U.S. Grant used to move his forces upon Vicksburg, MS. The regiment then entered the trenches during the siege of that city. After the fall of Vicksburg (7/4/63) the regiment spent the winter of 1863/'64 at that location.

August saw the 13th in action at Jonesboro (8/31-9/1/64) and at Lovejoy's Station (8/20/64). It then pursued the fleeing Rebels to Gaylesville, AL. During the entirety of the Atlanta Campaign the regiment lost 331 killed, wounded and captured.

After the cecessation of hostilities the 13th marched to Washington City where it took part in the Grand Review. It then moved to Louisville, KY for final muster.

No firm birth date has been found for Lewis Warren. Even his birth year is inconclusive with 1824, 1826, 1827 and 1828 appearing in U.S. Census tallies. With all this ambiguity, based on research conducted by Denise Otteson, herein we are settling on his birth month being September and the year 1824. Lewis was born in the state of Connecticut.


Sometime around the mid-1840s Lewis married for the first time. As we shall see, this marriage would NOT be his last!! His bride was Paulina Rhodes (b. 1824 NY.). The couple were wed in New York then settled there as that was where – in 1848 - their first child, a son they named Newman, was born.

As denoted by the birth states of the three Warren children named above, the family moved three times between the late 1840s and early 1850s. In 1849 they were in New York, but by the time of the 1850 U.S. Census they were residing in Putnam County, IL. They remained in Illinois at least through the 1853 birth of Mary, but had removed to Iowa by 1854 when Josiah came into the world. In 1856 Iowa their community of residence was Walnut located in Pottawattamie County. Finally, when Austania was born in 1857 they were somewhere in Missouri.

If, in fact Paulina had died, with four young children under his roof – Charles had apparently died by 1856 – Lewis wasted little time before remarrying. On 9/9/57 in Nodaway County, MO he wed for a second time.

The new Mrs. Lewis Warren was named Margaret and her middle initial was E. Her maiden surname is an unknown. She was born during 1831 in Indiana.

Lewis and Margaret appear to have produced one child. Daughter Sarah was birthed in Iowa during 1859.

Both mother and daughter were gone by March, 1862. Their fates are unknowns.

On 3/12/62 in Lee County, IA Lewis “tied the knot” for a third time. This bride was Emaline Elizabeth Jane Stinson. “Emma” as she was called, had been born on 11/9/32 in Warren County, KY. Before we move forward with this marriage, however, there is a war to be fought.

Without access to Private Warren’ s military records all we can say about his period of enlistment is that he made an inter-regiment company transfer before the 15th left Iowa and he received a wound to his right  hand and/or  arm during the 10/3/62 battle of CORINTH, MS. The nature of the wounding was such that it resulted in his discharge on 2/26/63, well before the end of his three year enlistment.

Back home in Iowa Lewis and Emma worked on a family of their own. In this vein, son Benjamin was born on an unknown date in 1864. Interestingly, near the end of that same year Lewis’ wounded arm had healed enough that he re-enlisted in the army.

Here we are going to theorize that by 11/9/64 Benjamin Warren had been born. If this was the case, then Lewis’ return to the military may have been financially motivated. During the American Civil War economic times were tough throughout the country and by ’64, with patriotic enlistments waning, serious cash bonuses or “bounties” were being offered to new enlistees. Substantial bonuses, which could be sent home,   plus the lure of a monthly $13 pay check may well have lured Lewis away from his wife and infant son.

Private Warren’s second enlistment was with the 13th Iowa Infantry. It appears, on this occasion time away proved to be fairly benign with Lewis safely returning home in July, 1865.

At some point in time between July, 1865 and the birth of Lewis and Emma’s second son, Frank, in 1869 the Warren family quitted Iowa and took up farming in Nebraska. The U.S. Census for 1870 found the Warren household in Columbus Platte County, NB. In the household in addition to Lewis, Emma and their two sons was Lewis and Paulina’s youngest daughter Austania (then 13 years of age) and an unidentified fourteen year old named Ellen A.

Tragedy again stuck Lewis’ life when, circa1872, Emma died. Details of her passing are not available. She was buried in the Columbus Cemetery located in Platte County, NB.

On 4/21/73 in Madison County, NB Lewis married a fourth time. The bride’s name was Jane Price. Beyond the fact that apparently she and Lewis set up their household in Columbus Platte County, NB available documents are silent on this woman and her marriage to Lewis.

It appears that in 1874 Lewis applied for a U.S. Government disability pension based on his days of Civil War soldiering. From information drawn from an available pension card it looks like the request was granted. However, without access to his pension files no details of his stipend can be presented.

Bride number five. On 6/13/78 in Columbus Platte County, NB Lewis wed a fifth time. This woman’s name was Viola I. Baker. If this marriage did occur it didn’t last for long. The 1880 U.S. Census for Neligh Antelope County, NB shows a household that contains only Lewis and his son Benjamin.

Speaking of Neligh Antelope County, NB. It was there on 8/5/80 Lewis reportedly got hitched a sixth time. All that is known about this Mrs. Warren is that her maiden name was Rachel Paulin. The couple apparently set up their household in Neligh. The success of this union plays like a broken record. For one reason or another It didn’t last. .

Lewis married for a seventh and final time on 6/18/82. This Mrs. Warren was Lydia (nee Belmer).  She had been born 3/21/58 in Tuscola, Tuscola County, MI and – perhaps – previously married. .  The coupling occurred in Bone Creek Holt County, NB.

It appears Lydia likely had a child (Catherine “Kate” Runney b.7/78 NB) or children by an earlier marriage, but also birthed a daughter and son with Lewis. They were: Rosamond (b. 1884 NB. In later years Lewis’ last will and testament would characterize her as “weak mentally”) and Everett (b. 1885 NB).

In 1885 Lewis and Lydia were living in Ainsworth Brown County, N. With them was their infant daughter, Rosamond and Lydia’s daughter Kate.

According to the Civil War Veterans register of 1890.by the dawn of the nineties Lewis and Lydia had made their way to Township 22 in King County, WA. What had drawn the couple to the Puget Sound region of the Pacific Northwest and when they had arrived here are unknowns.

The last we hear of Lydia comes from 1892. In that year she and Lewis were residing in the King County, WA community of Kent. The couple later separated or divorced as Lydia died in Antelope, NB in 1900.

Lewis Warren died on 3/19/02. The location of his passing was south of Seattle in  the Western Washington Hospital for the insane located in Steilacoom, Pierce County, WA  near the city of Tacoma. No death certificate relating to his passing has yet been found.

In his will Lewis left his Kent King County estate to his children Rosamond and Everett as well as step daughter, Kate. He was/is buried in the Saars Pioneer Cemetery located in Kent King County, WA