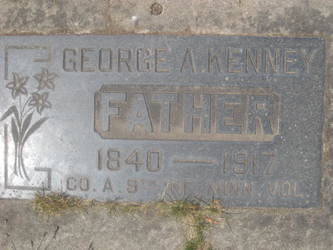 The 9th Minnesota was a three year infantry regiment that fought a "war within a war." Beginning with Company "A" which was mustered into Federal service on 10/2/62 companies of this organization were spread throughout Minnesota and the Dakotas fighting and otherwise dealing with hostile Native American Indian tribes.

During the fall of 1862 Company "A" joined with movements of the 6th MN. It was then sent to Ft. Ridgley for the winter. In the spring of 1863 it was part of an expedition to the Missouri River. It then returned to Ft. Snelling.

The regiment came together for the first time on 5/26/64 at St. Louis, MO. From there it moved into Mississippi to fight Johnny Reb. At the battle of Guntown Olmsted Co. MS (6/10/64) it charged and routed a body of the enemy. It then covered the retirement of Federal forces in good order until it became separated from the main column. During this affair the regiment's losses were 286 killed wounded and missing. Of those, 233 were captured. Out of that number 119 men subsequently died in southern prisons. Referring to the affair, the adjutant general of Minnesota noted "That this disastrous undertaking did not result in the loss of the entire Union force was mainly due to the gallantry of the officers and men of the 9th."

1865 saw the 9th involved in the campaign to capture Mobile, AL. It participated in the siege of Spanish Fort (3/27 - 4/8) and Fort Blakely (4/2 - 9). It was then ordered to other Alabama locations until being returned to Minnesota for final muster.

NOTE: The birth - to - death biographical profile of George A. Kenney was created in October, 2020 during the Covid-19 medical pandemic. It contains less depth of detail than many other biographies within this website because military service, pension and other veteran-related files housed in Washington, D.C.'s National Archives were not available. At a later time those documents will be obtained and the data contained therein added to the narrative which follows.

On 8/14/62 in St. Anthony Hennepin County, MN George enlisted in the U.S. Army. His unit of choice was the 9th Minnesota Infantry.

Without accessing his military service records we really know only two specifics about Private Kenney's period of service. Firstly, during the battle of Brice's Cross Roads, Mississippi (6/10/64) he was taken prisoner and held captive by the Rebels for seven months. Secondly, he survived imprisonment and The War returning to civilian life on 8/14/65.

After their marriage the Kenneys appear to have settled in and spent their child bearing/rearing years in Minnesota. In May of 1875 their residential area was noted only as Hennepin County. By 1880, however, it was more specifically listed as Minneapolis Hennepin County. As of 1900 it was Ward 3 of Hennepin County.  During these years George's occupation is listed as being "cook."

Sometime after 1900 the Kenney family quitted Minnesota and removed to Illinois. There, in 1910 their address was noted as Ward 12 in the Cook County city of Chicago.

George Kenney died in King County, WA on 4/14/1917. What had drawn them to the Puget Sound region of the Pacific Northwest and when they arrived here are unknowns. Cause of the 76 - 77 year old's passing was chronic Nephrites (kidney disease) and senility. Burial was/is in the Riverton Crest Cemetery located south of Seattle in Tukwila King County, WA.

On 12/10/88, while still in Minnesota George applied for and was granted a disability pension based on his days of Civil War soldiering. Without the availability of his pension files the details of the granting and the amount of his monthly allowance are unknowns.

On 6/18/17 following George's death Jennie/Jessie petitioned the U.S. Government to continue receiving at least a portion of her late husband's stipend. While that request was granted, again, without access to pension files dollar amounts are not known.

Jennie/Jessie would live out her years in the Riverton area of south King County, WA.  In 1920 her place of residence was the home of E.P. Kenney.  Without doubt a relative, the connection between this individual and the widow Kenney is another unknown. Also in the household were daughter Blanche and other younger individuals.